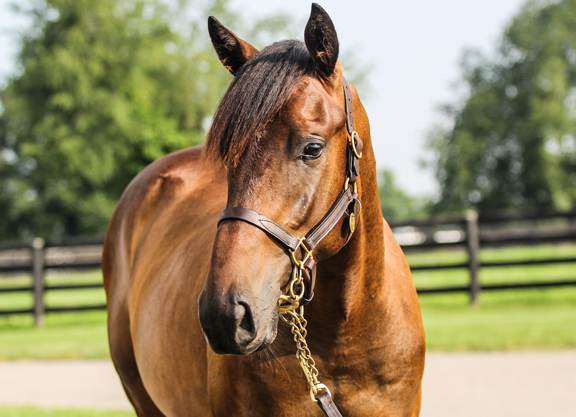 Q B One as a yearling | Christie DeBernardis

He has yet to race, but Q B One (Uncle Mo) has already been the subject of several stories and a video feature from XBTV. That's the way it is when your dam is one of the best horses of her era.

Now, the story of Q B One is about to heat up even further. After the 3-year-old colt worked five furlongs in 1:01.80 Jan. 8 at Santa Anita, trainer Richard Mandella said that Q B One was “a couple of weeks from starting.” He will start for her owner and breeder, Spendthrift Farm, who also campaigned Beholder.

“He's a big gangly colt and doesn't take life too seriously,” Mandella said. “He works better than average, but he hasn't shown yet in his workouts that he is a star. But he is doing what we ask and a little more sometimes. It's hard to say how good he is.”

Q B One arrived at Mandella's Santa Anita barn last Mar. 20 to prepare for his racing career. He had his first recorded workout Mar. 30 and had several more breezes until Mandella decided to back off on him. Between July 27 and Dec. 5, he did not have a published work.

“I got him up to five-eighths and he kind of lost interest on me,” the trainer said. “So, I just gave him a little break and kind of backed up to zero and started over again. We've been happier with his works. We just have to hope it stays this time.”

Q B One worked three furlongs on Dec. 5, the first of a string of six breezes.

“We're not trying to make him do much,” Mandella said. “Just like with any other horse, we're just trying to get him ready to run. He's training a little more forward than he did before.”

Does he see any similarities to Beholder, the winner of 16 stakes and a champion at two, three, five and six?

“It's apples and oranges,” he said. “I haven't seen anything to make me see her. But I've had a lot of others that didn't show me that either. He does shows enough that it could happen.”

The trainer said Q B One will likely begin his career at six furlongs and “might need that first race to wake him up.”

Mandella did think enough of him to send a nomination fee to Oaklawn Park, which made Q B One eligible for the preps for the GI Kentucky Derby at that track. The first race in the series is the Feb. 15 GIII Southwest S.

“He's obviously not going to be ready for the Southwest, but you never know what can happen.” he said. “So, we wanted to make him eligible for those races at Oaklawn.”

Nominations for the Derby preps at Santa Anita are not in yet.

After Q B One, there will be more to come. Beholder has a 2-year-old filly by Curlin named Karin With an I and a yearling filly named Teena Ella, who is by War Front. She is due to Bolt d'Oro this season.