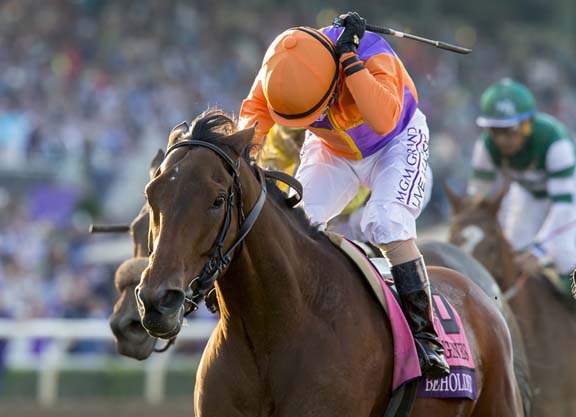 SARATOGA SPRINGS, NY-Just like Rachel Alexandra (Medaglia d'Oro) and Zenyatta (Street Cry {Ire}) in 2016, Beholder (Henny Hughes) and Tepin (Bernstein) are entering the National Museum of Racing's Hall of Fame together Friday in their first year of eligibility.

Six years after the no-brainer election package, Hall of Fame voters selected two brilliant race mares of the second decade of the 21st century to join the best-of-the-best club on Union Avenue. Though they excelled on different surfaces, there are plenty of similarities. Both were well-beaten in their career debuts. Both earned multiple division titles. Both won at the Breeders' Cup. Both beat males in Grade I races. Both are the first Hall of Fame horses handled by their Hall of Fame trainers. Neither was an especially expensive yearling purchase: Spendthrift Farm acquired Beholder for $180,000; Robert Masterson snagged Tepin for $140,000.

What does it say to their trainers that they are first-ballot Hall of Famers?

Mark Casse on Tepin: “It Just shows what I already knew, that she's great.”

Richard Mandella on Beholder: “I'm not surprised. I think she made that impression on people with her record. She has done things that either not many or no horses have done. Fillies and mares running 1 1/4 miles under two minutes? I'm not saying none have, but I don't know that many have. And to win a Grade 1 at 2-3-4-5 and 6, I think, speaks for itself.”

Beholder and Tepin, the only two selections in the contemporary division this year, are part of a class of eight that will be inducted at a ceremony that begins at 10:30 a.m. at the Humphrey S. Finney Pavilion. The Historic Review Committee elected trainer Oscar White and the horses Hillsdale (Take Away) and Royal Heroine (Ire) (Lypheor {GB}). The Pillars of the Turf selections are James Cox Brady, Marshall Cassidy and James Ben Ali Haggin.

During her five seasons of competition with Mandella, Beholder won 18 of 26 starts. Thirteen of those victories were in graded stakes and 11 were at the highest level, Grade I. She won all three of her Breeders' Cup starts, the 2012 GI Juvenile Fillies, and the GI Distaff in 2013 and 2016. Sickness kept her out of the 2014 and 2015 events. In 2015, she was scratched two days before a scheduled showdown with Triple Crown winner American Pharoah (Pioneerof the Nile) in the GI Classic. In her career finale the following year, she triumphed in the Distaff by a nose over Rick Porter's champion Songbird (Medaglia d'Oro) following an epic battle in the stretch. The thrilling score against Songbird helped her clinch her fourth Eclipse Award to go with the 2-year-old filly title in 2012, the 3-year-old filly crown in 2013, and older dirt female honors of 2015.

“”Every trainer should get to train a horse like that,” Mandella said. “You can come up with all the fancy training ideas you want and most of them you're just throwing it in the wind. But this one I don't think it mattered who trained her, she was just great every year.”

Beholder finished second in her three starts before the 2016 Distaff–including a five-length loss to California Chrome (Lucky Pulpit) in the GI Pacific Classic–and was 3-1 in the wagering against Songbird.

“She was in heat a lot that summer,” Mandella said. “It was the first year she ever started doing that, that it was so obvious. And I think her mindset just wasn't quite the same. But she came out of it a couple of weeks before the Breeders' Cup and somebody interviewed me and I said, 'She's back. She'll run her race this time.'”

Mandella was not involved in the purchase of Beholder by the Spendthrift team. However, when Spendthrift's owner, B. Wayne Hughes, asked him to select some of the farm's young horses to train, he chose her. He said it was clear early on that she was a special horse.

“She was just a fat little 2-year-old that just didn't take the training serious,” he said. “But she showed she could run.”

After ending up fourth, beaten 8 1/2 lengths in her debut at Hollywood Park in June 2012, she broke her maiden easily and was beaten a nose by Executiveprivilege (First Samurai) in the GI Del Mar Debutante. Two races later, she beat Executiveprivilege by a length in the Juvenile Fillies.

All of Beholder's victories came on California tracks. Her second and last off-the-board finish was a fourth in the 2014 GI Ogden Phipps at Belmont Park. Mandella said she probably cost herself a victory in the GI Kentucky Oaks when, he said “she picked a fight with the pony and rider going to the gate” in front of the huge crowd at Churchill Downs. She was second by a half-length to Princess of Sylmar (Majestic Warrior).

“She had some behavioral problems, all along,” Mandella said. “She was 5% dynamite and the other 95% a sweetheart. But when she was bad, she was real bad.”

Mandella pointed to a pair of starts as being at the top of the list of his favorite Beholder moments.

“Well, the Pacific Classic is just breathtaking,” he said. “And then the last race, to beat that great mare that ran second of Mr. Porter's, Songbird.”

Mandella was looking forward to attending the induction ceremony, but had to cancel his trip from California because he tested positive for Covid-19.

Tepin took a little longer to emerge as a star for Casse. He described her as a good 2-year-old in a four-race season that included a victory in the GIII Delta Downs Debutante. Casse moved her to grass in the second race of her winless 3-year-old season.

“The last time we ran her as a 3-year-old, she didn't run well,” Casse said. “She actually was very distressed after the race and [Masterson] and I kind of looked at each other and he said to me, 'Why don't we send her home?' We sent her back to Ocala and gave her a little break, just gave her a couple months off.”

Casse said he prefers that  newly turned 4-year-olds have a little extra time before they start facing older horses. She was away from the races from August until March.

“We did that, and then when she came back as a 4-year-old, she was a monster,” Casse said. “It was like a different horse. The rest is history.”

Tepin promptly reeled off three straight wins, topped by a half-length victory over Filimbi (Mizzen Mast) in the GI Just a Game S. at Belmont Park. That flurry of success between March 21 and June 6 was a precursor of what was ahead. By the time she completed her career with a second in the 2016 GI Breeders' Cup Mile, she had prevailed in 11 of 15 starts and finished second the four times she did not win. Two of those setbacks, one by a nose in the GI Diana H. and the other by a head in the GII Ballston Spa S., came at Saratoga after the Just a Game.

A seven-length triumph in the GI First Lady S. at Keeneland encouraged Casse to try her against males over the same course four weeks later in the GI Breeders' Cup Mile. Sent off at $4.90-1, she used her speed to win by 2 1/4 lengths. With her 5-2-0 record in seven races, she was voted the female turf Eclipse Award.

Tepin extended her unbeaten streak with four more wins to open 2016 and then was presented with another challenge, running at Royal Ascot in the G1 Queen Anne S.

“To be honest with you,” Casse said, “I wasn't overjoyed about going to Royal Ascot simply because I thought we had maybe the best turf horse in the country, maybe in the world and I just felt like it was a big ask of her.”

Tepin was up to the task and finished first in the 13-horse field by a half-length under her regular rider Julien Leparoux.

“If I knew what I know now, I don't know if I would have taken her because it's so tough, Casse said. “It just shows you really how great she was.”

Tepin resumed her career in in September with a victory over males in the GI Woodbine Mile at Woodbine. She was second to Photo Call (Ire) (Galileo {Ire}) in the First Lady and came up just short in her finale, losing by a half-length to Tourist as she tried to repeat in the Mile. Her 6-2-0 record in eight starts produced another Eclipse.

“Crazy thing about her was that probably the best race she ever ran in her life was her last start,” Casse said. “She should probably should have won the Breeders' Cup again. She kind of got shuffled back which was not what where she liked to be. The normal Tepin turning for home would have been right there on the lead. She was back and she was coming wide and Tourist, Joel [Rosario] rode Tourist that day. He snuck up the rail and kind of got in front of her and she still almost ran him down. I always looked at that, even though she didn't win it, as maybe one of her greatest races.

“The race of her life was Royal Ascot and she gave us an experience that I'll probably never experience again.”