Beholder Back to Scene of Greatest Triumph 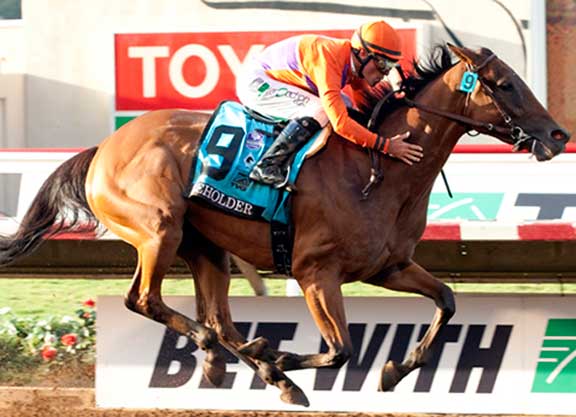 In a career that includes 17 wins in 22 starts, 10 Grade I victories and a pair of Breeders’ Cup tallies, it’s hard to pick out a singular moment where Beholder (Henny Hughes) shined brightest. Last Aug. 22, however, the bay mare produced her most staggering accomplishment to date–an 8 1/4-length demolition in Del Mar’s GI Pacific Classic, her first start against males, earning a clear career-top Beyer of 114.

“Nature didn’t make very many like her, ever,” trainer Richard Mandella said at the time. “That was just amazing. I’ve never felt emotion over a race quite like this. When she made that move, it took my breath away.” Rider Gary Stevens added: “I’ve never felt anything like that (acceleration) on a racetrack before, and the funny thing was she did it all on her own. She just turned on the afterburners.”

Beholder returns to the scene of that tour de force for the first time and will face four rivals as the prohibitive favorite in the GI Clement L. Hirsch S., an event she annexed by seven lengths last summer, three weeks before her Pacific Classic win.

After missing the Breeders’ Cup due to illness last fall, the now 6-year-old started her 2016 campaign with an easy score in the GIII Adoration S. May 8 at Santa Anita. She followed that up with a slightly more taxing win in the GI Vanity Mile there June 4, where she held off Stellar Wind (Curlin) by 1 1/2 lengths. She has prepared for this engagement with a pair of seven-furlong workouts and a five-panel spin in :59 1/5 over the local surface July 25.

Stellar Wind will return to take another shot at Beholder. Last year’s champion 3-year-old filly finished a neck second in the GI Breeders’ Cup Distaff and earned a career-high 99 Beyer in the Vanity Mile, her only start in 2016.

It very much appears to be a two-horse race, but The Dream (Chi) (Scat Daddy) is an interesting new shooter. The 4-year-old is a multiple Group 1 stakes-winner in her native Chile who most recently finished 11th in the G1 El Derby against males Feb. 7. She adds Lasix for new trainer Jerry Hollendorfer and comes into this off a sharp local six-furlong gate work in a bullet 1:11 4/5 July 21.