Beckett Back For More At Breeders' Cup 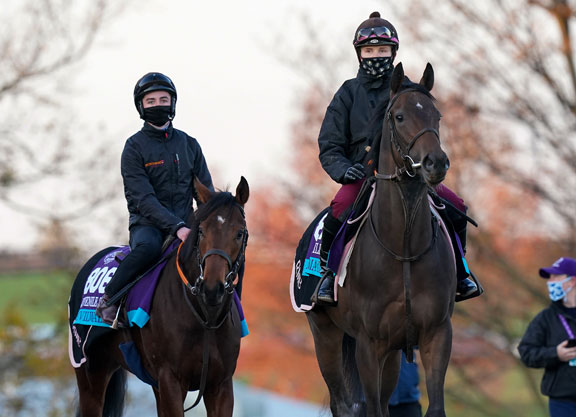 LEXINGTON, KY–This year's European contingent at the Breeders' Cup includes a handful of accomplished trainers sending out their first runners at the meeting-the likes of Michael Bell, James Fanshawe, Nigel Tinkler, John Quinn and Ger Lyons. They will, no doubt, all be hoping to follow in the mould of trainer Ralph Beckett, who won with his first ever Breeders' Cup starter, Muhannak (Ire) (Chester House), in the 2008 Breeders' Cup Marathon at Santa Anita Park.

The Andover-based Beckett has exhibited a special touch with fillies over his 20-year career as a trainer; his three Classic wins have come with Look Here (GB) (Hernando {Fr}) and Talent (GB) (New Approach {Ire}) in the G1 Oaks of 2008 and 2013, and with Simple Verse (Ire) (Duke of Marmalade {Ire}), who in 2015 became the first filly in 22 years to win the G1 St Leger. Beckett's last runner at the Breeders' Cup was Qatar Racing's filly Secret Gesture (GB) (Galileo {Ire}) when the meeting was last at Keeneland in 2015; she finished seventh in the GI Filly & Mare Turf, having been disqualified from first to third in the GI Beverly D. S. in her prior run.

Beckett has supervised his two charges' exercise the past two mornings astride a pony on Keeneland's all-weather training track, and he said they will take their first spin over the turf course on Thursday.

“They've traveled over very well and handled it all very well so we're in good shape,” Beckett said. “They look well, they've been on the training track yesterday and today and they'll breeze on the turf on Thursday morning around the bend and just get a feel of it.

“I walked the course on Tuesday night and it's in excellent shape. They both handle fast ground; it isn't what you'd call fast here but it's quick enough for what they're used to at home.”

Beckett was straightforward in his assessment of Devilwala's draw in light of the fact that he will have a short run into the first turn going a mile.

“Devilwala goes forward, so that's a problem, but there's not much we can do about that,” the trainer said. “He'll have to take his medicine or land close to the pace, whichever way it is. But we'll certainly ride him positively; he needs that.”

Devilwala, a 220,000gns purchase by Alex Elliott and Blandford Bloodstock at the Tattersalls Craven breeze-up sale on June 25, broke his maiden at first asking at Haydock in August for trainer Archie Watson before finishing second in the G2 Gimcrack S. and seventh in the G2 Mill Reef S. He was transferred to Beckett prior to running fourth over the soft ground in the G1 Dewhurst S. on Oct. 10, far outrunning his odds of 100-1.

“It was an extraordinary run in the sense that it was certainly the owner's decision to run there rather than mine,” Beckett reflected. “I was going along for the ride, effectively. He ran way above my expectations based on what he'd shown at home. He doesn't show very much at home; he hides his light under a bushel so we were delighted with his effort and he's trained very well since.”

New Mandate, meanwhile, has been in Beckett's care for some time: he was part of a group of five staying-bred yearlings bought at the yearling sales last year for a group spearheaded by Beckett and agent Alex Elliott with the intention to sell on later in their careers. Being by G1 Prix du Jockey Club winner New Bay and out of a mare by Derby winner Authorized (Ire), it is easy to see why New Mandate fit that bill, and he was picked up at Arqana's August Yearling Sale for €35,000. Beckett said, however, the gelding came to hand much faster than anticipated and was thus sold on to new Hong Kong-based owner Marc Chan after breaking his maiden in a Sandown handicap at third asking in September. New Mandate has subsequently won his two starts for Chan: the Listed Flying Scotsman S. on Sept. 11 and the G2 Royal Lodge S. on Sept. 26.

“We set out last year to buy five yearlings with staying pedigrees for the market at the end of their 3-year-old careers,” Beckett said. “We weren't expecting him to show the speed he has, and when a good offer came in from Jamie McCalmont, who used to employ Alex and is an old ally of mine as well, it made very good sense for a trading syndicate. We were delighted to do a deal for Mr. Chan and it's worked out well so far, so let's hope that continues on Friday.”