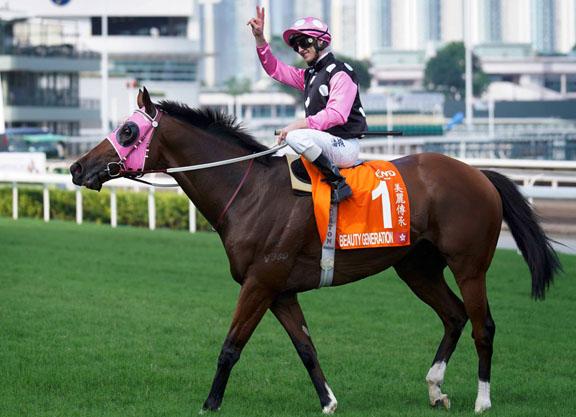 Beauty Generation (NZ) (Road to Rock {Aus}–Stylish Bel {Aus}, by Bel Esprit {Aus}), a two-time Hong Kong Horse of the Year and only horse to surpass the HK$100 mark in career earnings, has been retired after his fifth in Sunday's G1 Longines Hong Kong Mile. He will live out his days at Living Legends in Victoria, Australia, alongside other Hong Kong retirees Silent Witness (Aus), Mr Stunning (Aus) and California Memory, among others.

Bred by Nearco Stud Ltd., Beauty Generation was purchased for NZ$60,000 by Kylie Bax's Hermes Syndications from the Highden Park draft at the NZB National Yearling Sale in 2014 and was sent to race in Australia. Trained by Anthony Cummings as Montaigne, the bay gelding won two of seven starts, including a runner-up effort in the G1 Rosehill Guineas, prior to his purchase by the Kwok Family.

Prepared in Hong Kong by John Moore, Beauty Generation was third to his late stablemate Rapper Dragon (Aus) (Street Boss) in the 2017 BMW Hong Kong Derby and set (and still holds) a track record for 2200 metres, but was reinvented as a 1400-1600m horse for the 2017-2018 season. He carried Derek Leung to a 15-2 upset in the 2017 G1 Longines Hong Kong Mile and Zac Purton was in the irons when wiring the field in the 2018 G1 Champions Mile.

BEAUTY GENERATION tried his heart out again today.
We are so proud of our champion that will now retire to @LivingLegendsAU.
8 x Group 1 wins
2 x Horse of the Year
HK$105,000,000 the highest prizemoney earner in HK history

We will miss him here in HK

The latter race was the start of an 18-month stretch where nothing could come close to Beauty Generation. In that time he amassed 10 consecutive wins, going back-to-back in the Hong Kong Mile (see below) and the Champions Mile and he peaked on a domestic rating of 138 following a first-up success in the G3 Celebration Cup H. Third in search of a three-peat in the 2019 Hong Kong Mile, he retained his zest for racing to post a second score in the G1 Queen's Silver Jubilee Cup (1400m) last February.  The last of his 18 local victories came in the G2 Chairman's Trophy in April. David Hayes trained Beauty Generation for three starts this season following Moore's retirement.

“I knew it may be on the table,” said Purton, who rode the champion 28 times. “It's a bittersweet day. It's a sad end. He's been the best horse for me in my career. I'm certainly going to miss him. He was brave again [in Sunday's Mile]  and wherever he may go in the world, I'm sure I'll go and visit him in his paddock one day.”