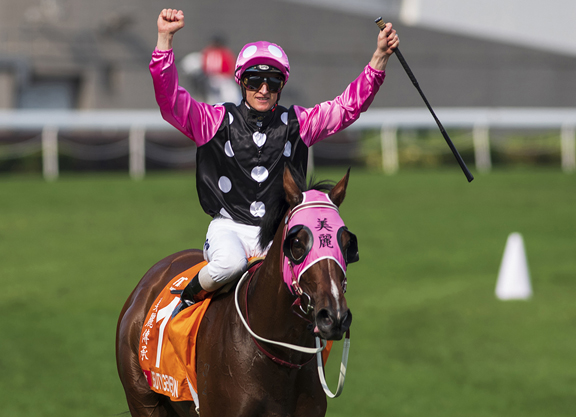 In no-doubt-about-it fashion, Patrick Kwok’s Beauty Generation (NZ) (Road to Rock {Aus}) was named Horse of the Year in Hong Kong for the second straight year in ceremonies held Friday evening at the Ritz-Carlton Hotel Friday evening. In becoming the eighth horse in the modern era to land the top honor back-to-back, the 6-year-old gelding was providing trainer John Moore with a remarkable seventh straight HOTY award, joining Military Attack (Ire), Designs on Rome (Ire), Able Friend (Aus), Werther (NZ) and the late Rapper Dragon (Aus) going back to the 2012/2013 season. Beauty Generation was unopposed in also being crowned Champion Miler for the second year running and was also handed the award for Hong Kong’s Most Popular Horse of the Year.

Bred by Nearco Stud Ltd., Beauty Generation compiled a perfect record over eight runs in 2018/2019, successfully defending his title in the G1 Longines Hong Kong Mile before adding the G1 Stewards’ Cup (1600m) and the G1 Queen’s Silver Jubilee Cup (1400m) before annexing the G1 FWD Champions Mile. With nearly HK$85 million in the bank, he has surpassed former Moore trainee and Horse of the Year Viva Pataca (GB) as the leading money earner of all time, with the $100-million mark within reach as he stays in training at seven next season.

The Tony Cruz-trained Exultant (Ire) (Teofilo {Ire}) became the fifth horse to be named Champion Middle Distance horse and Champion Stayer in the same season. The 5-year-old also faced the starter eight times in 2018/2019, becoming the first in Hong Kong history to complete the G1 Longines Hong Kong Vase/G1 Champions & Chater Cup double, each over 2400m. He proved his versatility with a victory in the G1 Citi Hong Kong Gold Cup (2000m) and was runner-up in the G1 QE II Cup at the metric 10 furlongs.

A model of consistency throughout his career and never out of the top three in 21 starts, the John Size-trained Beat the Clock (Aus) (Hinchinbrook {Aus}) was named Champion Sprinter. Third in the G1 Longines Hong Kong Sprint, he achieved a belated Group 1 success with a defeat of Mr Stunning (Aus) (Exceed and Excel {Aus}) in the G1 Centenary Sprint Cup in January and added a second top-level success in the Chairman’s Sprint Prize in April. He was also second to Beauty Generation in the Queen’s Silver Jubilee.

Fellow Size trainee Champion’s Way (Aus), also a son of the late Hinchinbrook, went from a rating of 52 to 108 in winning six of his seven starts and was named Champion Griffin in addition to Most Improved Horse. He closed the season with a popular success in the G3 Lion Rock Trophy H., a rare group win for a 3-year-old, and looms one of the top chances in the 2020 Classics.

With 166 riding wins and a chance to tie or break Joao Moreira’s record of 170 in a season, Zac Purton was named Champion and Most Popular Jockey. Of the 12 international Group 1 events contested in Hong Kong, Purton had his picture taken no fewer than seven times, including the two aforementioned wins on International Day. During the season, the Aussie ex-pat joined the retired Douglas Whyte as the only riders to win 1000 Hong Kong races and he also set a single-season earnings record (HK$233.4 million) with Sunday’s closing-day program to come.