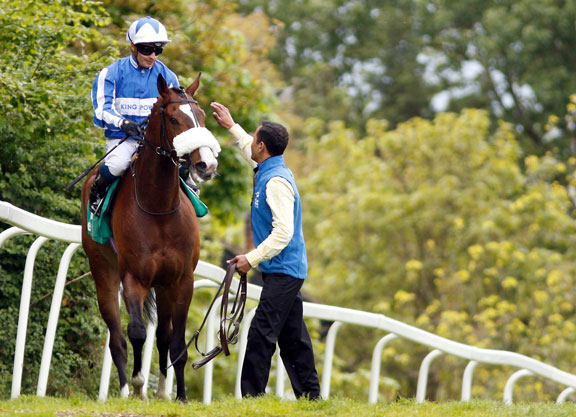 Beat the Bank after winning the bet365 Mile in April | racingfotos.com

Retaining his title in the gamest of fashion in Saturday’s G2 Fred Cowley MBE Memorial Summer Mile at Ascot, King Power Racing’s Beat the Bank (GB) (Paco Boy {Ire}) unfortunately suffered a life-ending injury in the process. Having mastered  Zaaki (GB) (Leroidesanimaux {Brz}) yards from the line, the 5-year-old’s stride was broken which narrowed the winning margin to a nose and upon pulling up it was soon discovered that he had sustained a complicated fracture. The winner of seven black-type races, including six in group company and five at this level, he owed nothing to connections but gave his all one more time at a track that had served him so well. Chasing the front trio from a long way out, the 2-1 favourite kept giving to Silvestre de Sousa but it looked in vain for a period inside the final furlong with Zaaki seeming in command. Forging ahead with all of the will and spirit that marked his career, he was already pulling up short as he hit the line with the minimum margin in his favour.

Trainer Andrew Balding was understandably emotional and tweeted afterwards, “Tragically Beat the Bank suffered a fatal injury after winning the Summer Mile for the second year running. He was such a brave horse and everyone at Kingsclere and King Power are heartbroken. We will remember him forever.” Beat the Bank was giving three pounds to the talented Zaaki here due to a penalty earned by winning the Apr. 26 G2 Sandown Mile, which adds extra poignancy to the tale. He had lost out by a neck last time in the June 18 G1 Queen Anne S. at the Royal meeting, his first placing at the top table.

The dam is the Listed Oh So Sharp S. third Tiana (GB) (Diktat {GB}), who also produced the listed-placed sprinter Salt Island (GB) (Exceed and Excel {Aus}). She is kin to the G3 Molecomb S. runner-up Mary Read (GB) (Bahamian Bounty {GB}), who is in turn the second dam of the G3 Molecomb S. winner and G1 Commonwealth Cup runner-up Kachy (GB) (Kyllachy {GB}). Tiana’s 3-year-old filly Chil Chil (GB) (Exceed and Excel {Aus}) is in training at Kingsclere, while she also has a 2-year-old filly by Showcasing (GB) who was bought by Rabbah Bloodstock for 140,000gns at the Tattersalls October Book 2 Sale, and a yearling filly by Muhaarar (GB).