BC Workers Out in Full Force at Churchill 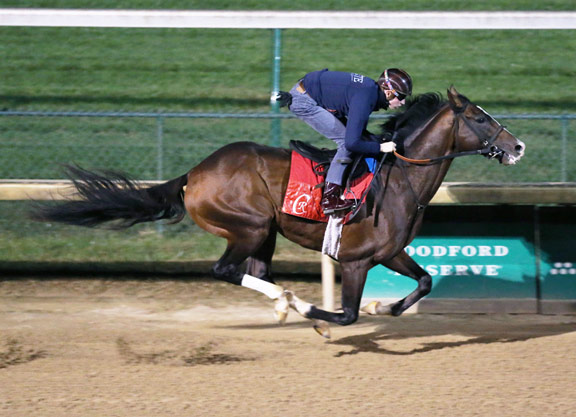 MGISW War of Will (War Front) kicked off the Breeders' Cup action Friday morning at Churchill Downs. With jockey Declan Carroll in the irons, the bay went in fractions of :11.60, :23.40, :34.80 and :46.80. They galloped out six furlongs in 1:12.20, seven furlongs in 1:24.80 and a mile in 1:38.40, according to Churchill Downs clocker John Nichols. War of Will has made all three of his starts this season on turf, most recently finishing third in the GI Ricoh Woodbine Mile, but is being pointed for the GI Breeders' Cup Dirt Mile.

“I was just the passenger along for the ride,” said Carroll. “I've always loved how this horse trains over the dirt. He's very versatile and can run on dirt or turf but he's always trained great over the dirt.”

Next up from the Mark Casse barn was War of Will's MGISW stablemate Got Stormy (Get Stormy), who was second in the GI Breeders' Cup Mile last term, but is pointing for the GI Breeders' Cup Turf Sprint this season. With Kim Carroll aboard, the chestnut went in splits of :11.80, :23.20 and :34.80.

Brad Cox breezed four Breeders' Cup contenders, including GI Claiborne Breeders' Futurity S. hero Essential Quality (Tapit), who is pointing to the GI Breeders' Cup Juvenile. With Florent Geroux up, the Godolphin runner started his work one length behind multiple graded stakes winner Mr. Misunderstood (Archarcharch) through splits of :13.20, :36.80, :48.80 and 1:00.60. Essential Quality finished even with Mr. Misunderstood at the wire and the duo galloped out together in 1:26.40.

“He seems like he's really matured over the summer into where he is now,” Geroux said. “He's one of those horses where he keeps getting better as he gets more experience.”

“It was kind of an almost must-win situation in the Ack Ack to get him back on track,” trainer Bret Calhoun said. “Mentally I think it was good for him and I can tell a difference with his training. He seems happier after the race. He hasn't had a lot go right for him this year in his races so coming into the race off a win is crucial.”

“He's sort of been a challenging horse his entire career,” Calhoun said of the 6-year-old son of Tapit. “He's continued to get better mentally and he's been more consistent with age. I know it's in him to come out of his shell.”

“She likes to have a target in front of her, so we typically work her this way,” conditioner Neil Pessin said. “Her race against Serengeti Empress (Alternation) [in the Derby City Distaff] was so thrilling. She dug in really hard that day to get up just in time.”