Bay Success A Long Time In The Making 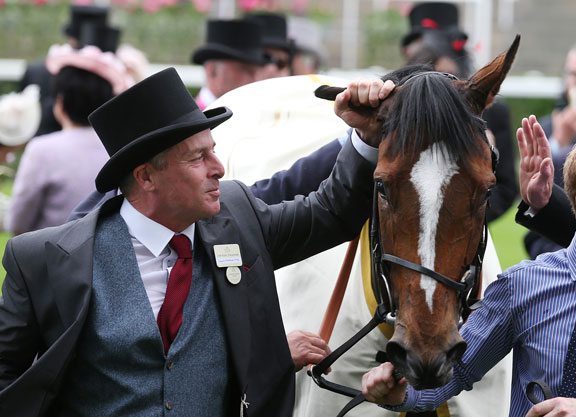 Royal Ascot is where everyone that is involved in Flat racing wants to be represented. With this in mind, a trainer with just 25 horses in his care couldn't reasonably expect to have a runner at the meeting, never mind a winner, but Dave Marnane is no ordinary 25-horse trainer. Indeed, for those that have paid attention to the career of the Tipperary-based handler, it will have been no surprise to see him in the winner's enclosure at Royal Ascot last week.

In the last decade Marnane has built up a remarkable record in some of the most competitive handicaps on the British racing calendar. He has saddled two different horses to win the Portland H. at Doncaster, as well as a winner of the Victoria Cup at Ascot and the Wokingham at Royal Ascot. To emphasise just how difficult those races are to win, no other Irish-based trainer has won the Portland or the Victoria Cup in the last 50 years and his win in the Wokingham was the first Irish-trained winner of that race for 27 years. Marnane has also proven adept at sending horses to the Dubai Carnival with great success, having saddled a winner there each year from 2011 to 2014 and having had multiple placed horses either side of those victories.

Last Wednesday, Marnane added to his CV by becoming just the second Irish-based trainer in the last 50 years to saddle the winner of the Royal Hunt Cup at Royal Ascot thanks to the extraordinarily easy victory of Settle For Bay (Fr) (Rio de la Plata).

In common with Marnane's other winners of valuable British handicaps, planning was key to this success. It represented the realisation of a plot that had its origins over a year earlier, but had met with a very serious setback along the way.

“Settle For Bay always worked like a smart horse and when he won his first handicap off 69 in April last year, we actually started planning a path for him to the Britannia H. at Royal Ascot that year,” Marnane said. “Unfortunately, we didn't get very far with it, as he fractured his pelvis in his very next start at Dundalk.”

“To be honest, it didn't look good for him that evening. We thought he was a goner. Thankfully, he was sensible enough to know he was in trouble, pull himself up and stand still. We soon discovered that he had what was quite a significant fracture. The racecourse vets did a great job with him up there and we decided to bring him home that night. Our head travelling lad Danny O'Connell had the longest trip home from Dundalk that he ever had that night, as he had to drive very slowly so as not to risk Settle For Bay getting unsettled and moving in a way that disrupted the fracture.”

“When we got him home, he had to be tied up in his box so that he couldn't lie down or roll for four weeks. That is a big ask of any horse, but he was the perfect patient the whole way through. As a result, he was able to come back into training much faster than would have been expected. It's quite remarkable to think that he was back racing 19 weeks to the day after breaking his pelvis as significantly as he did.”

Having bounced back from his serious pelvis injury, Settle For Bay improved from race to race and soon embarked on what would prove to be a four-race winning streak at Dundalk during the winter months. Each win was more impressive than the one that preceded it, with his fourth win being the one that led Marnane to hatch a plan.

“It was only after his fourth win at Dundalk that he looked the real deal,” the trainer said. “Prior to that, he had always looked a bit green when he hit the front, but that day he was as straight as a gun barrel and really looked as though the penny had fully dropped with him. We had our suspicions and hopes prior to that, but that was the day that he really jumped out at us as a horse that could win a Royal Hunt Cup.”

“We don't have many horses here, but when we get a good one we know what to do. He was raised to a mark of 99 after that win, which historically made him highly likely to get into the Royal Hunt Cup, so we made that his target. We gave him a nice break after that and he ran a lovely race on his comeback at Leopardstown in May. What really pleased us about that run is that he was in tight quarters all the way, something which he didn't have a lot of experience of prior to that, and he seemed to relish it. That gave us great hope that the hustle and bustle of a Royal Hunt Cup wouldn't hold any fears for him.”

Everything had gone smoothly for Settle For Bay in his preparation for the Royal Hunt Cup up to the week before the race, but there was one very significant scare left for him to overcome.

“He just didn't blow me away in his last breeze the Thursday before the race and when we scoped him, he wasn't spotless,” Marnane said. “He wasn't dirty as such, but he wasn't spotless. As you can imagine, this frightened the life out of us. We did what we could with him for the next couple of days and scoped him again on Sunday. Mercifully, he was 100% and we sent him on his way to Royal Ascot. He doesn't travel all that well when he's by himself, so we sent over his next-door neighbour Kodiac's Back with him for the journey. I have to thank Ascot for accommodating us with that, as it was a big help.”

When encountering the likes of Royal Ascot for the first time, young horses tend to shrink, boil over or grow. In Settle For Bay's case it was very much the latter.

“At home, he is an absolute Christian of a horse. My youngest daughter Emily is his biggest fan and she goes into his stable all the time and we don't have to worry about her. He puts his head in her lap and is content to stay there all day! However, in the build-up to the Royal Hunt Cup, I saw a side of him I hadn't seen before. Whether it was the atmosphere or what, he just came alive. From when he left his stable to go up to the racecourse, he was angry! The racecourse farrier had to make a small adjustment to one of his shoes as we were saddling him and Settle For Bay gave him a horrible time of it. That said, once Billy got up on him, he focused his mind and was all business from there.”

One can imagine that watching the vessel of one's hopes and dreams in a cavalry charge such as the Royal Hunt Cup would be likely to make for torrid viewing, but such was the ease with which Settle For Bay travelled, Marnane hardly had a moment of doubt.

“The race itself was remarkably easy to watch. My only instructions to Billy were to make sure he got cover and to get him relaxed, regardless of how far back he was. Once he had gone two furlongs and had settled, I was very happy. It's not often watching a race like the Royal Hunt Cup that you can really believe that you are on a winner fully two furlongs from home, but it was very straightforward for him.”

Emotions ran high after the race with Marnane and numerous members of his team shedding tears. While winning on that stage is also likely to be emotional, there was more to that emotion than meets the eye.

“It was emotional afterwards for a few reasons. We've thought he was a good horse for a long time. All through the autumn, winter and spring we've been looking at him and dreaming what he might be capable of doing. It might be different for a bigger yard with plenty of horses that they can dream with, but for us it was all about him. To then see him to go and show what we have always believed he could do on a stage like Royal Ascot, it's a real release. You'd need to be a tougher man than me to be able to hold all that emotion in.”

“It wasn't just about the horse, either,” he added. “One of his owners Dennis McGettigan's wife Nicola had a serious health scare during the winter. Around Christmas time she told us that her chemotherapy was due to finish in June and I said to her that during her treatment she could look forward to leading in Settle For Bay after he won at Royal Ascot. It was only talk at the time, so for it to happen and for Nicola to be there with Dennis and his other owner Mossie Casey to greet him in the winner's enclosure made it extra special.”

“You need the right horses to get you to meetings like Royal Ascot, but you also need the right team. My wife Mel is a huge help, as is my brother Ed who is a big part of the race planning. James Casey rides him every day and was with him at Ascot. We have a small team, most of which have been with us a long time, and it's great for all of them to be part of such a big win.”

“Looking forward, we obviously can't wait to get Settle For Bay out again. We will look at a listed race for him next and all being well, we'll look at the Dubai Carnival for him. We won't be afraid to travel him for suitable races and he'd have you dreaming of running in races like the Arlington Million.”

While the Settle For Bay story promises to run for quite some time yet, Marnane's attentions will soon turn to finding his next star at the yearling sales. With Marnane having bought the likes of Settle For Bay (€35,000 in conjunction with Peter Doyle), Dandy Boy (20,000gns), Jamesie (£11,000) and Elleval (£45,000), his eye for a bargain speaks for itself.

“We have a few empty stables here and will be hoping to fill them at the upcoming yearling sales. We have had success putting together 10-member syndicates made up of two or three yearlings each. We charge an all-in price that pays for the horses and for their training up to the end of their 2-year-old year. At that stage, we balance the books and make a decision with the syndicate whether to sell the horses or to race on. The people that have got involved seem to enjoy that structure and we have had plenty of winners in them already, most notably Freescape who was an intended runner in the Britannia S. at Royal Ascot last week until a stone bruise ruled him out. We have already had plenty of interest from people looking to get involved in new syndicates this autumn, but if anyone wants to get involved they are more than welcome to get in touch.”

With the racing world having been given a timely reminder of Marnane's talents on the grandest of stages, it seems likely that those empty stables will not remain unoccupied for long.