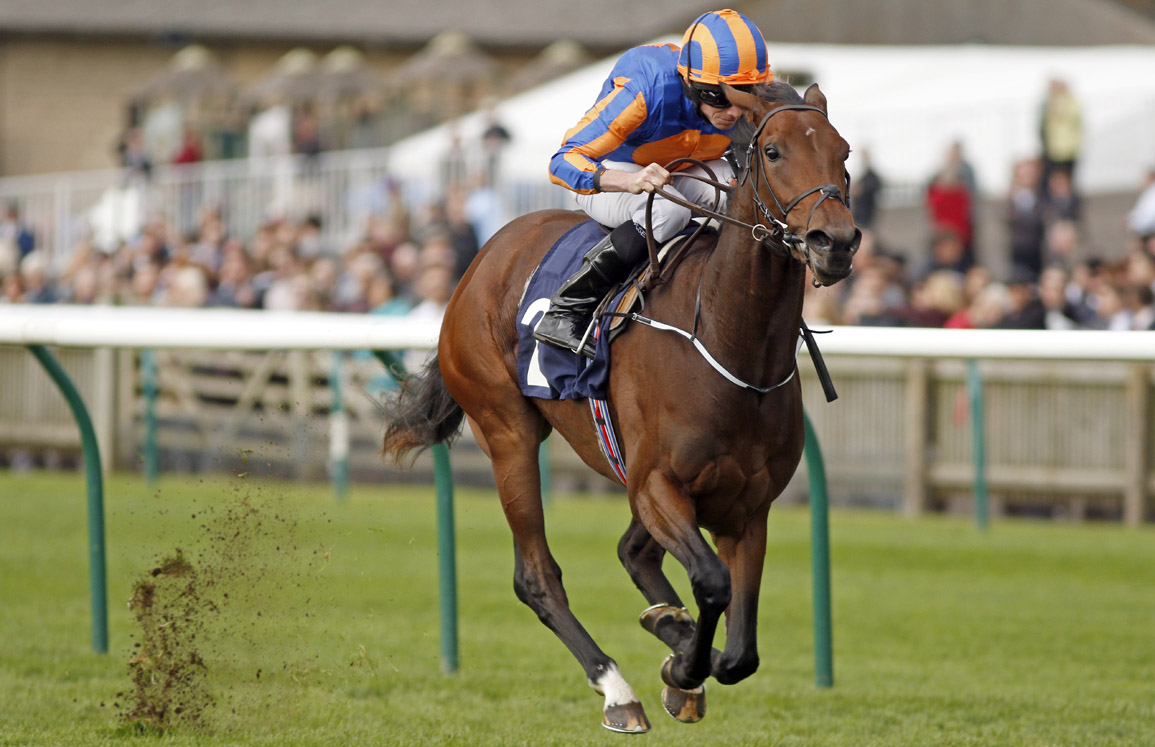 Michael Baum was an artist. The graded stakes-winning owner-breeder who passed in September was, by profession, a landscape architect, but he also deeply appreciated the beauty and genetic composition of Thoroughbreds, which he bred and raised on his Man O'War Farm in Lexington.

One of Baum's most prized possessions, the 6-year-old mare Bye Bye Baby (Ire) (Galileo {Ire}) (hip 268), will go through the ring in foal to Tapit as part of a high-quality three-horse addition to the Fasig-Tipton November Sale on Nov. 9 as part of the Denali Stud consignment. She will be followed through the ring by her second foal, a War Front colt (lot 269). Bringing up the supplemental draft from The Estate of Michael Baum will be the Grade III-placed 4-year-old filly Ivyetsu (Tapit) (lot 270), a Baum homebred who is a half-sister to the dam of the ascendant Dubai Honour (Pride Of Dubai {Aus}).

Bye Bye Baby raced for the Coolmore partners and trainer Aidan O'Brien and won the Listed Staffordstown Stud S. and was third in the G3 Killavullan S. at two. She improved her stock further at three when winning the G3 Blue Wind S. before finishing third in the G1 Oaks behind Forever Together (Ire) (Galileo {Ire}) and Wild Illusion (GB) (Dubawi {Ire}), and ahead of Magic Wand (Ire) (Galileo {Ire}). Bye Bye Baby finished fourth in the G1 Pretty Polly S. and G1 Irish Oaks before seasons' end, at which point Baum purchased her privately.

“Michael always dreamed of owning a mare like Bye Bye Baby,” said Denali Stud's Conrad Bandoroff. “It was something that brought him great joy to be able to have her. He bought her, and eight months later is when the full brother Serpentine won the Derby. I know that gave Michael a tremendous thrill.”

Further indication of Bye Bye Baby's value is the fact that her sister Bound was sold at the Tattersalls December Mares Sale of 2018 as a 4-year-old in foal to Dark Angel (Ire) for 2.2-million gns to Lordship Stud. That resulting filly, named Bouquet (GB), broke her maiden at Ascot in September for John and Thady Gosden. Bound's second foal, a Dubawi (Ire) colt, was bought by Godolphin for 550,000gns at this year's Tattersalls October Yearling Sale Book 1. Bound produced another Dubawi colt this year.

Bidding went to $445,000 on Bye Bye Baby's first foal, a Justify filly, at Keeneland September this year, at which point Baum's family, including his wife Reiko, opted to retain her.

“She had a wonderful first foal by Justify who the estate is retaining,” Bandoroff said. “She's got a very nice War Front colt who will be selling right after her. It's a bit cliche, but she's every bit a collector's item, and it's an opportunity to access a family that seldom becomes available to the public. Bound sold in 2018 for 2.2-million guineas and Bye Bye Baby is every bit as valuable as her full-sister.”

“Bye Bye Baby is in foal to Tapit, North America's all-time leading sire by progeny earnings who just continues to go from strength to strength,” Bandoroff added. “He's had a fantastic year with Essential Quality, and he just goes to show that some things continue to get better with age. So that offers a lot of options and makes her really a dynamic package as to what a future purchaser could do.”

As for Bye Bye Baby's War Front colt, he enters the ring with good precedent, the War Front over Galileo cross having produced Group 1 winners U S Navy Flag, Roly Poly and Fog Of War, as well as G2 Vintage S. scorer Battleground and a total of 11 stakes winners.

“He's a big, strong, strapping colt with good size and leg for a War Front,” Bandoroff said. “He's very well balanced and very athletic. War Front continues to be one of the leading sires by percentage of stakes winners and is a really phenomenal stallion. He gets you 2-year-old form, they train on and they're very versatile.”

“We really didn't plan on selling him but he's so nice that we thought putting him in with the mare would really enhance her value, to show that she can produce that type of individual,” Bunning explained.

With Bye Bye Baby and Bound still young producers from such an prolific family, Bandoroff noted there is “still a lot of blue sky ahead” for the pedigree.

“Bye Bye Baby is six years old,” he said. “Bound's first foal by Dark Angel has won in two starts at two. The Dubawi yearling out of Bound this year brought 550,000 guineas to Godolphin. She's got a Dubawi foal on the ground, so as much as the family has already done, there is still limitless potential as to what could develop in the future.”

Another family on the rise is that of Ivyetsu. The Baums purchased her dam, the winning Kingmambo mare Compelling (Ire), a half-sister to the G3 Molecomb S. and G2 Flying Childers S. winner Requinto (Ire) (Dansili {GB}), in foal to Montjeu (Ire), for 325,000gns at Tattersalls December in 2012. The resulting foal was Mondelice (GB), who sold to Pegasus Farm for $270,000 at Keeneland September. Mondelice failed to make it to the races, and was put through the 2017 Tattersalls December Mares Sale in foal to Pride Of Dubai, where she sold for 75,000gns to Meridian International. Bred by Macha Bloodstock and Meridian International, Mondelice's resulting Pride Of Dubai colt was Dubai Honour, who has been rapidly progressive this year for trainer William Haggas, winning the G2 Prix Guillaume d'Ornano and G2 Prix Dollar before finishing second to Sealiway (Fr) (Galiway {GB}) in the G1 Champion S.

Meanwhile, the Baums covered Compelling with Frankel (GB) before exporting her to Man O'War Farm, and the resulting colt was Last Kingdom, who was purchased by Nawara Stud for $500,000 at Keeneland September. Last Kingdom won the G3 Prix Daphnis at three for trainer Andre Fabre before being sold on to race in Hong Kong.

Ivyetsu is Compelling's fifth foal. Bought back at $300,000 at Keeneland September, Ivyetsu went into training with Rusty Arnold. A winner in her second start at two, Ivyetsu was third in last year's GIII Sweetest Chant S. going a mile on the turf, and is offered as a broodmare prospect.

“Ivyetsu was a high-class race filly,” said Bandoroff. “She performed at two, she was graded stakes-placed at three and is from a great family. She's a good-sized Tapit with good substance to her. The mare [Compelling] is a strong mare and has imparted that onto Ivyetsu.”

Though Baum's estate is selling three valuable animals, his family plans to remain in the business. Bunning explained the decision to offer Bye Bye Baby in particular was about spreading the risk among a small broodmare band.

“I think it's a good time to sell upper-end stock,” she said. “We are planning on replacing–maybe not to the extent of [Bye Bye Baby's] value–but we are going to be buying some additional mares, so we're going to carry on, and that was Michael's goal. Reiko is here and loves the horses so we're planning on moving forward. He started a legacy and we're all very committed to him and that legacy.”

There are currently eight horses on Man O'War Farm and Bunning said the plan is to replenish with enough mares at the breeding stock sales to keep those numbers about the same.

“For practical purposes, when you have four mares, it's hard to have that much value in one mare,” she said. “We need to spread the risk a little bit and I thought the timing was right. So that was the decision, but it was a tough one.”

Baum was born in New York City, but moved with his wife Reiko to Lexington in 2001 when they purchased the 112-acre Man O'War Farm. In addition to the Justify filly out of Bye Bye Baby, the Baums' current stock includes Compelling; the dual Group 1 winner Odeliz (Ire) (Falco)–who the Baums purchased privately after she was bought back for 950,000gns at Tattersalls December in 2015-and her Tapit daughters Illiogami and Loved Reiko; and Forever Beautiful (Giant's Causeway), the dam of the stakes-winning Homeland Security (Smart Strike).

Baum retained some homebreds as well as selling, but only ever as yearlings.

“He never liked to sell weanlings, because he wanted to enjoy them to the very last moment as yearlings,” Bunning said.

“Michael was a very interesting person and anyone that knew him was amazed by his drive, his continuing to go on later in life, his enthusiasm, his love for the horse and really the beauty that he saw in landscaping,” Bunning added. “He was a very intelligent person. Everyone that I've talked to that knew him was amazed by how smart he was. He could figure out how to do anything–fix anything; he was an artist.”

“Michael was a fascinating man,” he said. “He was an artist in the purest form of the word. If you drive into Man O'War Farm, you really see it. He was a landscape architect. Michael loved doing projects with his hands, and you could really see that the farm was a reflection of his vision. He was a really interesting person and loved his horses.”