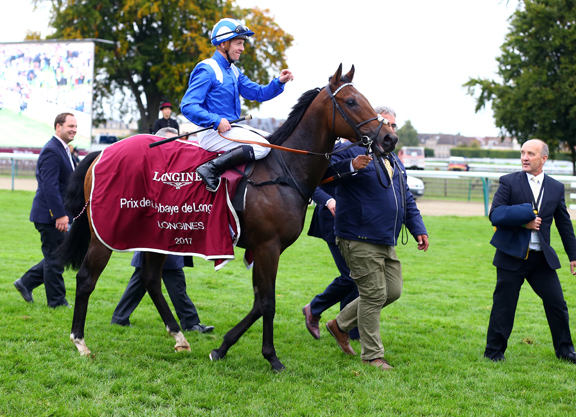 Shadwell's MG1SW Battaash (Ire) (Dark Angel {Ire}), who won the 2019 edition of the G1 Nunthorpe S., is doing well ahead of a title defense in the Aug. 21 York contest. Trainer Charlie Hills is upbeat ahead of the big day, especially as the bay sports a two-for-two record in 2020. He opened his 6-year-old account with a win in the G1 King's Stand S. at Royal Ascot on June 16, and then added his fourth G2 King George Qatar S. at Goodwood on July 31.

“He had a nice stretch of his legs on Saturday, and everybody was very happy,” said Hills. “He came out of his Goodwood run in good shape, and we're happy with where we are with him at the moment. Goodwood was a great day, but this game moves on pretty quickly, so you have to come back down to earth.

“We're well over Goodwood now and looking forward to this week. There's a few showers around–but he has won on good to soft before, and York is a fast track, which obviously suits him.”

One horse who will not line up against the Shadwell dynamo is fellow Hills trainee Equilateral (GB) (Equiano {Fr}), who will instead take his chances in the G1 Derrinstown Stud Flying Five S. at The Curragh on Sept. 13. A winner of the Listed Dubai Dash at Meydan in January, the former Juddmonte runner ran second in the G2 Meydan Sprint on Feb. 20 and filled that spot again in the G1 King's Stand S. behind Battaash at Royal Ascot. Racing in the colours of Mrs. Fitri Hay for the first time in the G1 Darley July Cup S., Equilateral was unplaced, but improved some last time, running fifth in the Listed John Smith's City Walls S. at York on July 18.

“He's fine-we just decided not to go to York,” Hills said. “We plan to run him in the Flying Five.”