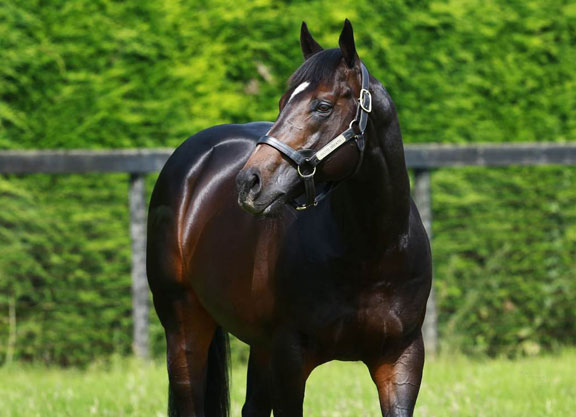 3rd-Naas, €300,000, Cond, 8-2, 2yo, 5f 205yT, 1:12.01, gd.
SACRED BRIDGE (GB) (f, 2, Bated Breath {GB}–Sacred Shield {GB}, by Beat Hollow {GB}), backed up a June 23 debut score over course and distance with a career high dropping to five furlongs for Tipperary's Listed Tipperary S. on stakes bow one week later and kept her perfect record intact with a game victory in the second renewal of this €300,000 Irish EBF Ballyhane S.. Well away to race close up under cover in the stands' side group, the strongly supported 15-8 favourite was shaken up to reduce arrears at the quarter-mile marker and was driven out once launching her challenge entering the final furlong to deny British raider Bosh (Ire) (Profitable {Ire}) by a half length. “We were attracted by this race with the sponsors, Ballyhane and Joe Foley, and the big pot,” admitted assistant trainer Shane Lyons. “It's great to train for Juddmonte, the pedigrees are second to none. That was a tough ask with her [five-pound] penalty and we're glad it's over. Colin [Keane] said she's versatile over five or six furlongs and she's getting sharper with her runs. She's in all the early closers, all the fancy races, and we'll be campaigning her now in Group races. We'll get serious now with the races she's entered in and take it from there.” Sacred Bridge is the seventh of nine foals and one of five scorers produced by a dual-winning daughter of stakes-winning matriarch Quandary (Blushing Groom {Fr}). The April-foaled homebred bay is a full-sister to last November's GI Matriarch S. heroine Viadera (GB) and a weanling filly. She is also kin to MSW G2 Grand Prix de Maisons-Laffitte runner-up Crossed Baton (GB) (Dansili {GB}) and a yearling colt by Camacho (GB). Lifetime Record: 3-3-0-0, $217,043.
O-Juddmonte; B-Juddmonte Farms Ltd (GB); T-Ger Lyons.