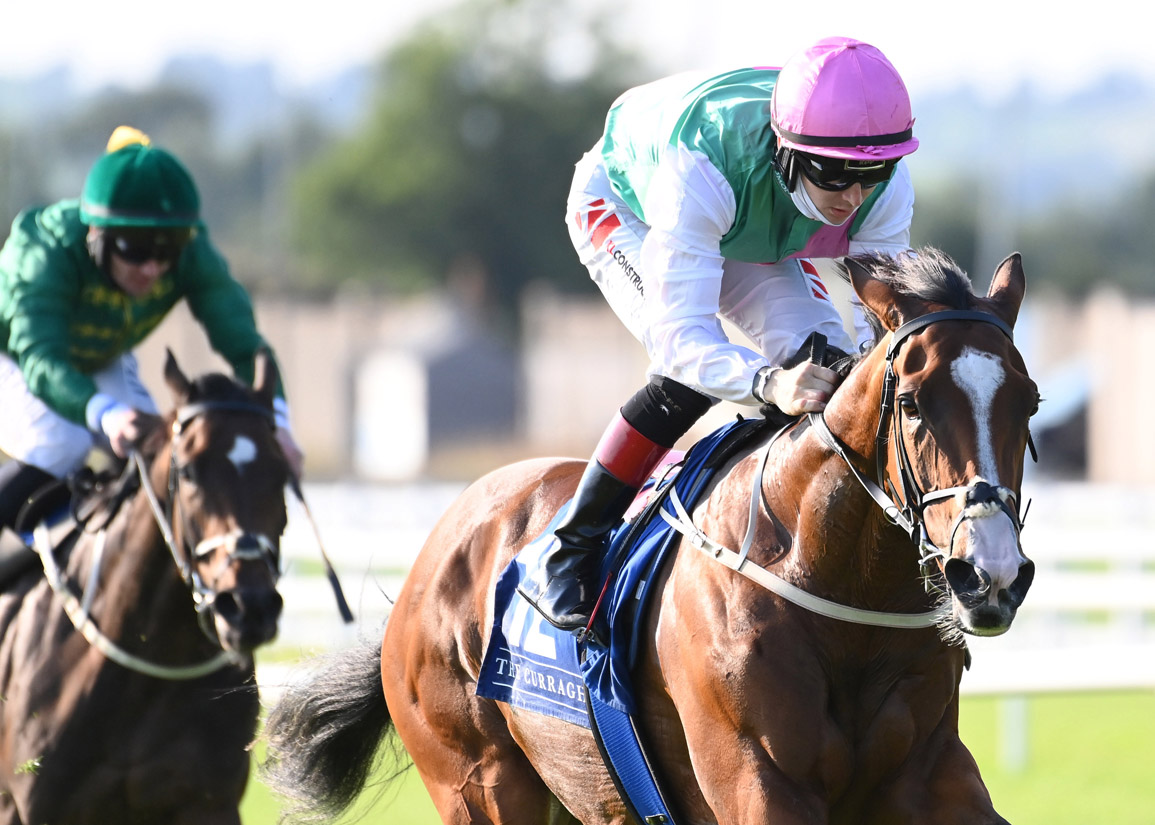 Completing a group 3 double on The Curragh's Friday card for Juddmonte, Ger Lyons and Colin Keane, Sacred Bridge (GB) (Bated Breath {GB}) took her impressive record to four-from-four in emphatic fashion in the Heider Family Stables Round Tower S. Coming into the six-furlong test off professional if less demonstrative displays in the five-furlong Listed Tipperary S. June 30 and the valuable Ballyhane S. at this distance at Naas Aug. 2, the homebred full-sister to Viadera (GB) belied any fears that she had reached an early plateau by raising her game against the strongest opposition she had so far faced. Always travelling strongly tracking Geocentric (Ire) (Kodiac {GB}) in second among the main group racing up the centre, the 15-8 favourite strode to the front approaching the two-furlong pole. Staying on powerfully from there, the bay had upstaged that stablemate by 3 3/4 lengths at the line, with the Listed Marwell S. winner Ladies Church (GB) (Churchill {Ire}) adding ballast to the form 3/4 of a length away in third with the fillies dominating. “She was very impressive. We'll freshen her up now and go for the [G1] Cheveley Park [at Newmarket Sept. 25],” Shane Lyons said.

Off the mark by 1 1/2 lengths from the subsequent G2 Debutante S. and G3 Silver Flash S. winner Agartha (Ire) (Caravaggio) on debut over six furlongs at Naas June 23, Sacred Bridge was back in action a week later to take the Tipperary before enjoying a break prior to her success in the Ballyhane. At this stage of her career, her full-sibling had shown distinct promise when finishing runner-up in the G3 Anglesey S. but had trailed in last in the Debutante with all her better days ahead of her. Given that it took until the November of her 4-year-old campaign for Viadera to hit the heights when winning the GI Matriarch S., connections of Sacred Bridge can enjoy considerable optimism that her achievements can be added to in time. “As Colin says, she has to step up again but why wouldn't she,” Shane Lyons added. “She's a diamond and as Ger says, that's what we get up for in the morning. She's push-button and long may she continue like that. She's very relaxed and horses get trips when they are like that. We're delighted with the two fillies. Ger said to Colin the other morning that it wasn't an easy decision the way Geocentric works and she'll step back to five now.”

A more petite version of Viadera, who also annexed the GIII Noble Damsel S., Sacred Bridge is also a half to Crossed Baton (GB) (Dansili {GB}) who captured the Listed Blue Riband Trial and Listed Churchill S. and was runner-up in the G2 Grand Prix de Maisons-Laffitte, G2 Prix Eugene Adam and G3 Hampton Court S. The listed-winning second dam Quandary (Blushing Groom {Fr}) was also responsible for the Listed Lingfield Oaks Trial winner Double Crossed (GB) (Caerleon), who is best known as the dam of the four-times group 1-winning European champion Twice Over (GB) (Observatory). Quandary is also the second dam of the group 1 heroines Passage of Time (GB) (Dansili {GB}) and Timepiece (GB) (Zamindar) related to the G1 Prix du Moulin de Longchamp winner All At Sea (Riverman). Sacred Shield's yearling colt is by Camacho (GB), while she also has a foal full-sister to the winner and Viadera.