Bast the Highest of Highs for Baoma Corp 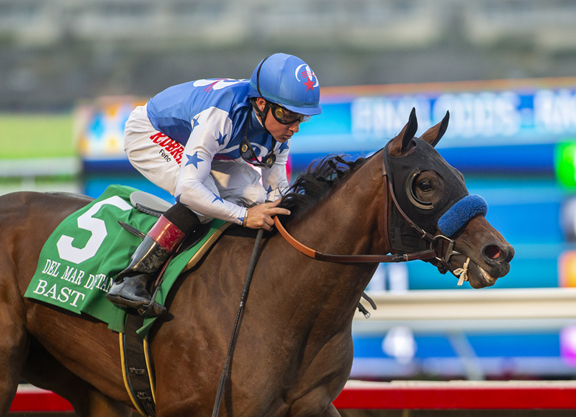 While they'd had several graded stakes contenders come along prior to Drefong's campaign, after the millionaire took his third Grade I in the Forego S. for Hall of Fame trainer Bob Baffert in 2017, Baoma Corporation went through a bit of a dry spell as they searched for their next big winner.

“[Susan] was getting to the point where we would lose a big race, and she'd get really down,” Baffert said. “I would say, 'You know, you have to get through this. This is what it is.' She had been kind of spoiled when she started winning right away.”

Then the next summer in Saratoga, Baffert got word from agent Donato Lanni on a yearling at the Fasig-Tipton Saratoga Select Yearling Sale that could be worth a look.

“When we got up there, Donato Lanni said, 'There's a filly here that you are going to love,'” Baffert recalled. “So we went back there and sure enough, she was a no-brainer. Susan was there and we told her we found a really good filly and she said, 'Please don't look at it too much. We don't want people to know you like it.'”

The Uncle Mo filly was the first foal out of the Arch mare Laffina, who hailed from the family of Grade I performers Fault (Blame) and Mananan McLir (Royal Academy). The youngster was purchased by Baoma Corp for $500,000 and was later named Bast.

“I actually thought she was going to bring a lot more,” Baffert said. “She looked like one of the best fillies there. I happened to see a picture of her going through the ring and you could tell she was like the perfect image of what you want a racehorse to look like. She was just a standout from day one.”

After running second in her first start, Bast ran back in the GI Del Mar Debutante S. a few weeks later, soundly defeating the filly who had beaten her on debut and winning by almost nine lengths. She then made the quick trip north to Santa Anita in September to claim a second Grade I in the Chandelier S.

Considered one of the top choices going into the Breeders' Cup Juvenile Fillies at Santa Anita last year, the bay went to the head of the field early, and after getting caught in a speed dual with longshot Two Sixty (Uncaptured), she ended up placing third.

The juvenile filly bounced back soon enough by sneaking in another win at two in the GI Starlet S., defeating Juvenile Fillies runner-up and 'TDN Rising Star' Donna Veloce (Uncle Mo) and becoming the only horse of her foal crop to win three Grade I races as a juvenile.

A few days after the calendar turned to 2020, Bast made her sophomore debut a winning one in the GII Santa Ynez S.

It was announced the next month that a minor injury would force the filly to retire.

“She came up with a small issue on her hind end and she was going to need 90 days off,” Baffert said.

The team of Baffert, Susan Chu, and John Sikura of Hill 'n' Dale put their heads together to decide the best route for the new broodmare prospect.

“Susan loves to race,” Sikura said. “Before she sells the mares, she covers them to the best stallion possible. We try to create the most value in the fact that she's in foal. She's not just a prospect, she's ready to be a producer.”

It was decided to send the daughter of Uncle Mo to fellow Baffert trainee and Triple Crown hero Justify (Scat Daddy).

Sikura added, “I think you have the best of both worlds. You have the precocity and brilliant 2-year-old speed of Bast, and then in Justify you have a Classic-distance horse with precocity, speed and brilliance.”

The Chus will part ways with their three-time Grade I winner this November as Bast is offered as Hip 245 through the Hill 'n' Dale consignment at the Fasig-Tipton November Sale.

Baffert said he is anticipating that Bast will be a hit at the 'Night of Stars,' where her dam Laffina sold for $1.5 million in foal to Ghostzapper last year.

“Certain horses, when you pull them out of the stall, [people say], 'Wow, she looks expensive.' And those are the kind of mares that people are going for because you know they're going to throw a beautiful foal. Those mares are priceless to come by.”

“Bast has been a Fasig-Tipton favorite for a long time,” said Fasig-Tipton's Boyd Browning. “Since we saw her on the Saratoga sales grounds, she had that wow factor as a yearling. I think the greatest compliment I've ever heard about Bast was that Bob Baffert said she was one of the top five fillies he's ever seen at a yearling sale.”

He added of the foal she is carrying, “The foal really represents a brilliance of one of the finest 2-year-olds in the country coupled with the dominance of an undefeated Triple Crown winner in Justify. It's just a remarkable opportunity, and then you keep in mind how young the mare is and just how many opportunities you'll have to see sons or daughters out of Bast. That gets you really excited.”

“You couldn't ask for anything more,” Sikura said. “I think every category that a high-end seeker of quality bloodstock would look for, Bast has all of those criterion met. If she were human, she would be driven to school in a limousine and would have gone to private school. She's the best of the best of the best. We're excited and proud to represent Susan Chu and we're looking forward to her not only succeeding in the sales ring, but more importantly to succeeding as a broodmare with whoever is lucky enough to acquire such a fine prospect.”