Basin Becomes First Winner for Liam’s Map at the Spa 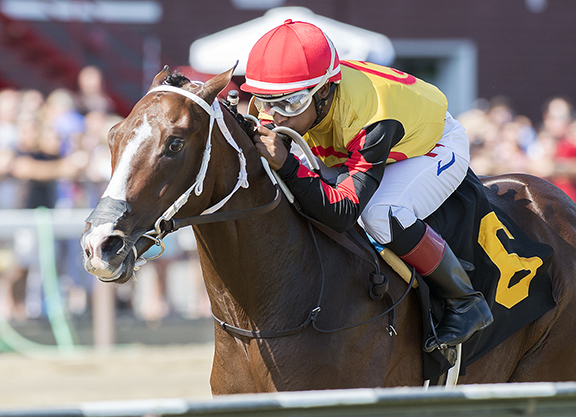 8th-Saratoga, $90,000, Msw, 7-21, 2yo, 6f, 1:09.77, ft.
BASIN (c, 2, Liam’s Map–Appenzell, by Johannesburg) kicked off his career with a close-up second behind By Your Side (Constitution) in a June 14 maiden at Churchill and was flattered when that rival came back to take the GIII Sanford S. here last weekend. Installed the 2-1 second choice behind fellow second timer Three Technique (Mr Speaker), Basin took to the front early and slugged it out with Federale (Dsicreetly Mine) through an opening quarter mile in :22.32. Federale was soon spent, but Basin continued on as Three Technique and another foe began to make their presence known. Turning for home, Basin was in the clear and Three Technique was doing his best running up along the inside, but the frontrunner had too much left in reserve and powered home a 1 1/4-length winner over the chalk despite lugging in. With the victory, Basin became the first winner for his freshman sire (by Unbridled’s Song). He is a half to bullring-loving Rise Up (Rockport Harbor), GSW, $1,225,540 and a yearling colt by Orb. His dam was bred to Nyquist for 2020. Sales history: $150,000 Ylg ’18 KEESEP. Lifetime Record: 2-1-1-0, $68,500. Click for the Equibase.com chart or VIDEO, sponsored by Fasig-Tipton.
O-Jackpot Ranch; B-Cottonwood Stables, LLC (KY); T-Steven M. Asmussen.