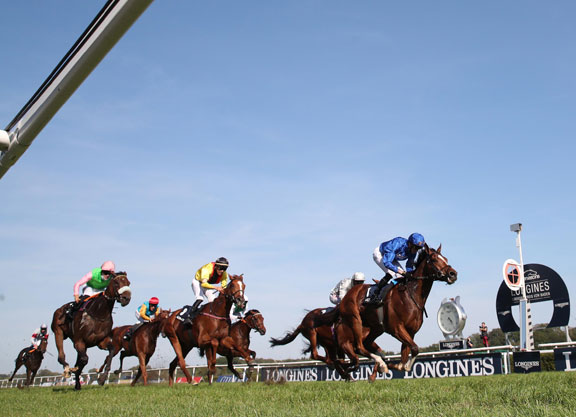 Godolphin's well-travelled Barney Roy (GB) (Excelebration {Ire}), fresh from success in July's G1 Grosser Dallmayr-Preis – Bayerisches Zuchtrennen at Munich and a fourth in last month's G1 Preis von Europa at Cologne, added another elite-level victory to his resume with a battling victory in Sunday's Longines-sponsored 148th Grosser Preis von Baden. Rider James Doyle employed patient tactics, passing the judge in fifth, before improving one spot along the backstraight. Scrubbed along and fanning wide for his challenge off the home turn, the 4-1 second favourite was ridden to the fore entering the final furlong and driven out to assert superiority in game fashion. The pacesetting Communique (Ire) (Casamento {Ire}) rallied gamely once headed and finished 1 1/4 lengths behind in second with G1 Deutsches Derby runner-up Torquator Tasso (Ger) (Adlerflug {Ger}) running on to finish a neck back in third.

“It looked a strong race on paper beforehand and I think the betting suggested everyone was quite closely matched,” said winning rider James Doyle. “We had the German Derby form and a few of Barney's races all tied in so it was a strong race. The ground was a bit testing for him in Cologne, but it's dried here okay. It's not his optimum racing surface, but it suited him better and he got away with it today.”

Godolphin's Alex Merriam added, “He's always been full of enthusiasm, as he's shown this season, he's had some great races and we're delighted to see him win another Group 1. We've been very lucky in Germany, we've always been well treated and Ghaiyyath won this last year. We'll get him home and see how he is, but Charlie [Appleby] has mentioned the possibility of going to Canada for the [GI] Northern Dancer [Turf S. at Woodbine].”