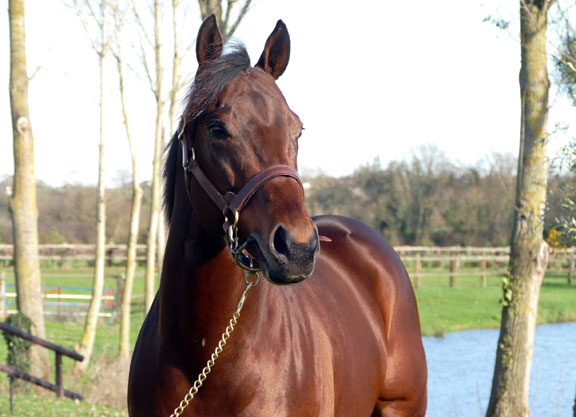 Fewer than 10 new Flat stallions have been retired to stand in France for this season, a low number compared to recent bumper years. The two Group 1 winners among the intake, Robin Of Navan (Fr) and Donjuan Triumphant (Ire), have both found themselves at the Werle family's Haras de la Barbottiere in the Sarthe region of the Pays de la Loire.

To the south of the country's renowned breeding heartland of Normandy, it is nevertheless an area with a rich Thoroughbred history, with Haras du Mesnil perhaps the most renowned of the studs nearby.

Just as at Mesnil and its sister stud Maulepaire, Haras de la Barbottiere combines Flat and National Hunt breeding and is also home to a breaking and pre-training centre. The latter was the focus of the business before the stallion roster increased to its current number of five, and it was a natural first step for Sophie Rousselle, whose husband Jean-Claude Werle started out at La Barbottiere with 50 hectares of land a quarter of a century ago.

“My husband's family bought a small farm to have two or three mares,” says Rousselle, a former amateur rider who also holds a training licence. “Stephane, my husband's son, was a jockey and he then joined us and started talking about expanding the business. We started doing some pre-training and breaking of young horses and then we met Pascal Noue of Haras de la Hetraie and he asked us if we could stand some stallions here.”

Noue's thriving Hetraie operation is currently home to a nine-strong dual-purpose roster which includes Kapgarde (Fr), Pastorius (Ger), Great Pretender (Ire) and George Vancouver (Ire). With many breeders in France still keen to use stallions in the local area, it has made good business sense to have stallions stationed in different regions. The popular jumps stallion Great Pretender, a son of the former champion National Hunt sire King's Theatre (Ire), was the first to be sent to La Barbottiere, followed by Apsis (GB), Satri (Ire) and Zambezi Sun (GB). Rousselle and Werle now stand the G1 Deutsches Derby winner Nicaron (Ger) on Noue's behalf and the 18-year-old son of Acatenango (Ger) was the second-busiest sire in France in 2019, covering 160 mares. The only horse with a bigger book than Nicaron was Haras du Cercy's Cokoriko (Fr), and his half-brother Chanducoq (Fr) (Voix Du Nord {Fr}) has been another new recruit to Haras de la Barbottiere.

The family has also recruited its own stallions, the first of which was Monitor Closely (GB), an Oasis Dream (GB) half-brother to Mount Nelson (GB). The latter was suddenly in vogue after being transferred from Newsells Park Stud to Ireland's Boardsmill Stud, his appeal to National Hunt breeders no doubt heightened by the Cheltenham Festival success of Penhill (GB). Sadly, Mount Nelson died last November just months after Monitor Closely was sold to stand at Longford House Stud in Co Tipperary.

“We love having the stallions,” says Rousselle. “Every year we have progressed but we keep our activities very separate, the pre-training and the stallions. Five stallions is our maximum, we are very happy at this level.”

In Robin Of Navan, the stud has acquired a stallion whose own sire American Post (GB) has been a dependable option for French breeders, while his grandsires Bering (GB) and Muhtahtir (GB) have both been stalwarts of the French scene.

“He's from a very active family with lots of good winners like Lily's Candle (Fr) and Lys Gracieux (Jpn); it's a lovely family,” says Rousselle of the well-travelled Robin Of Navan, the former star of Harry Dunlop's stable who won the G1 Criterium de Saint-Cloud as well as three other group contests in France and Germany. He also finished runner-up in the G1 Prix d'Ispahan and G1 Premio Roma.

She adds, “Richard Venn suggested the two stallions to us. He actually suggested Robin to us last year and we were very keen to have him but the owners decided to race him for another year.”

The duo is completed by Donjuan Triumphant (Ire), whose footnote in history to date is in being the first horse bought to race for King Power Racing. Also seven, he signed off from five seasons of racing with victory in the G1 QIPCO British Champions Sprint in October. His sire Dream Ahead moved to France three years ago and another of his sons, Al Wukair (Ire), stands at Haras de Bouquetot.

“There are not a lot of sprinting stallions in France, especially in the west of France,” says Rousselle. “And it's the first time since Anabaa that a Group 1-winning sprinter has started his stud career in France. So again, when Richard proposed that Donjuan Triumphant should come here, we were very keen.”

Donjuan Triumphant landed his first major blow in France as a juvenile when winning the G2 Criterium Maisons-Laffitte and his seven wins also include a pair of listed contests. Moreover, in 37 starts, he finished in the first three on 21 occasions and bowed out with a rating of 118.

French-based agent Richard Venn, the self-styled 'Le Stallion Man', arranged the deals for both horses following an inquiry about Robin Of Navan from Robert Brard. He explains, “Robert was very keen to buy Robin Of Navan but we had to wait a year and in the meantime Andrew Balding had got in touch with me to say that Donjuan Triumphant would be for sale. Robert bought him and I suggested Barbottiere would be a good place to stand him, then shortly afterwards Robin became available as well. So Robert is involved in the ownership of both stallions and is very keen to attract some British and Irish mares to Donjuan Triumphant. He has introduced him at a very reasonable fee.”

In recent years, Haras de la Barbottiere has expanded to occupy 120 hectares just outside Sable-sur-Sarthe, with Flat and jumps training facilities along with the regular accoutrements required for any breeding farm, including some spacious and newly constructed stallion boxes. Stephane Werle doubles as the stallion man and his wife Celine also assists on the farm along with English ex-pat Shelley Bantock.

The farm is too far out of the Normandy region to have been included in the recent Route des Etalons, but Robin Of Navan and Donjuan Triumphant both had an outing to the stallion show at Le Lion d'Angers in January to be introduced to breeders in the west of France.

“We have also had lots of breeders come here to see them,” says Rousselle, who is preparing for another busy covering season with a full stallion barn. Many of the farm's own broodmare band will be supporting the home team of sires.

“Most of our mares are owned in partnership with other breeders. The good thing is that if we decide to keep the foals we can train them ourselves,” he says.

Flat or jumps, breeding or racing, all bases are covered at Haras de la Barbottiere.