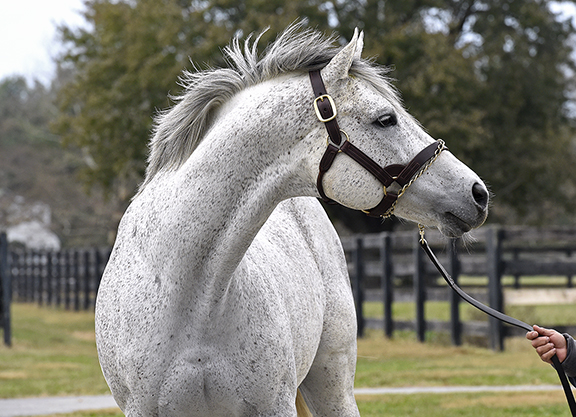 A Hillwood Stable homebred son of Bandbox was named grand champion of the 88th Maryland Horse Breeders' Association's Yearling Show, which was held at the Timonium Fairgrounds Sunday. The gray or roan colt is the third foal out of the Scrimshaw mare Dearie Be Good to win a class at the show–the colt's full-sister was reserve champion in 2018 and his half-sister by Great Notion was reserve champion in 2021. All are homebreds for Ellen Charles's Hillwood Stable, which also campaigned 2014 GIII General George H. winner Bandbox.

“It's special for Mrs. Charles to have a son of Bandbox win,” said JoAnn Hayden of Dark Hollow Farm, where the colt was born and raised. “We've loved this colt since birth. This one is big, robust, and looks very mature.”

Jonathan Thomas, who judged 59 yearlings at this year's show, concurred with Hayden's assessment.

“He was the best of a very good group. When you have to pick five finalists per class, you end up leaving out a bunch of good ones every time,” said Thomas. “Everyone looked very well-raised and prepared, but he had the best balance and substance.”