Bal a Bali Gets His American Grade I 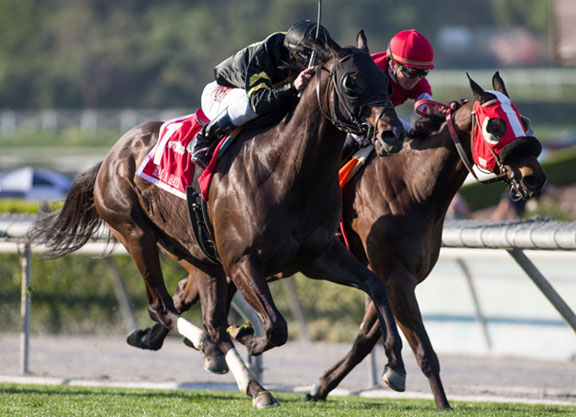 A champion and Triple Crown winner who tasted defeat but once in his native Brazil, Bal a Bali had not won a race in this country since annexing an optional claiming test at Del Mar in October 2015. Acquired by Calumet Farm from his previous U.S. owners Fox Hill Farm and Siena Farm, the 7-year-old snapped the skid in style with a victory in Saturday's GI Kilroe Mile at Santa Anita.

Held up at the fence from about fourth spot behind the front-running defending champion What a View, Bal a Bali raced under a nice hold saving ground into the second turn. Pulled out and around Conquest Enforcer (Into Mischief) at the quarter pole, he swapped his leads on cue and set his sights on What a View, who looked like he was off and gone entering the final furlong. But ridden vigorously by visiting jockey Javier Castellano, Bal a Bali kept on coming and grabbed What a View in the final few strides. With the win, he pushed across the $1-million mark in career earnings.

“I feel great. I'm very lucky and fortunate to have been able to ride the horse,” Castellano commented. “I give all the credit to Mr. Mandella and what he did; the way he trained the horse. He came from way back and gave a great performance. Richard kind of told me how to ride the horse a little bit. I did my homework, watched past races, handicapped the race. Everything turned out well, worked out great. I'm very fortunate and was very lucky to ride this horse.”

'TDN Rising Star' Dortmund, the 3-1 second choice, detested the grass, according to his connections.

“He was not [comfortable] on the turf,” his jockey Victor Espinoza explained. “I think he should go back to dirt again and recover, recuperate, and I think he's going to run big on the dirt. Big difference when you take them off the turf to the dirt. We'll be ready for the next one.”

Third to What a View last year, Bal a Bali filled the same spot in the GIII San Francisco Mile in April, but was unplaced in the GII Charlie Whittingham Memorial S. the following month and eighth when trying the dirt for the first time in the GI Gold Cup at Santa Anita last June.