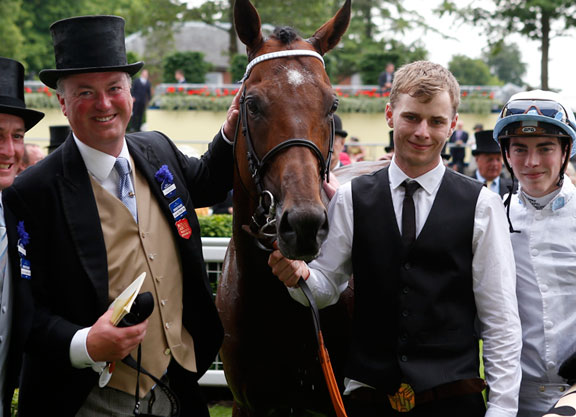 George Baker with Belgian Bill after that horse's win in the Roayl Hunt Cup in 2013 | Racingfotos.com

Trainer George Baker has purchased Robins Farm from Sheikh Fahad Al Thani and will relocate from Manton to the purpose built former base of Olly Stevens which is based in Surrey on the outskirts of London. “It's a massive opportunity,” Baker told The Racing Post. “We've been lucky enough to train in two of the most reputable facilities in Whitsbury and Manton, but the chance to own our own yard was too good to miss.” Baker is not afraid of traveling his horses abroad to win races and one of his main flag-bearers in recent season has been Belgian Bill (GB) Exceed And Excel {Aus}) who won a local Group 2 at Veliefendi in Turkey last year. Robins Farm has already been used to prepare a Royal Ascot winner in 2013 Listed Windsor Castle S. winner Extortionist (Ire) (Dandy Man {Ire}) and Baker will be hoping to continue in the same theme.”We're very lucky to have secured it. It's only 45 minutes away from London, which is good for our owners and puts us close to lots of London-based tracks. It's the chance of a lifetime,” he added. In addition to several all-weather gallops, walkers and turnout paddocks, Robins Hill has stabling for 55 horses, a number Baker intends to add to. “There's planning permission for plenty more so that will be one of the first things we do.”