Bahrain Turf Series Hailed At Home And Away 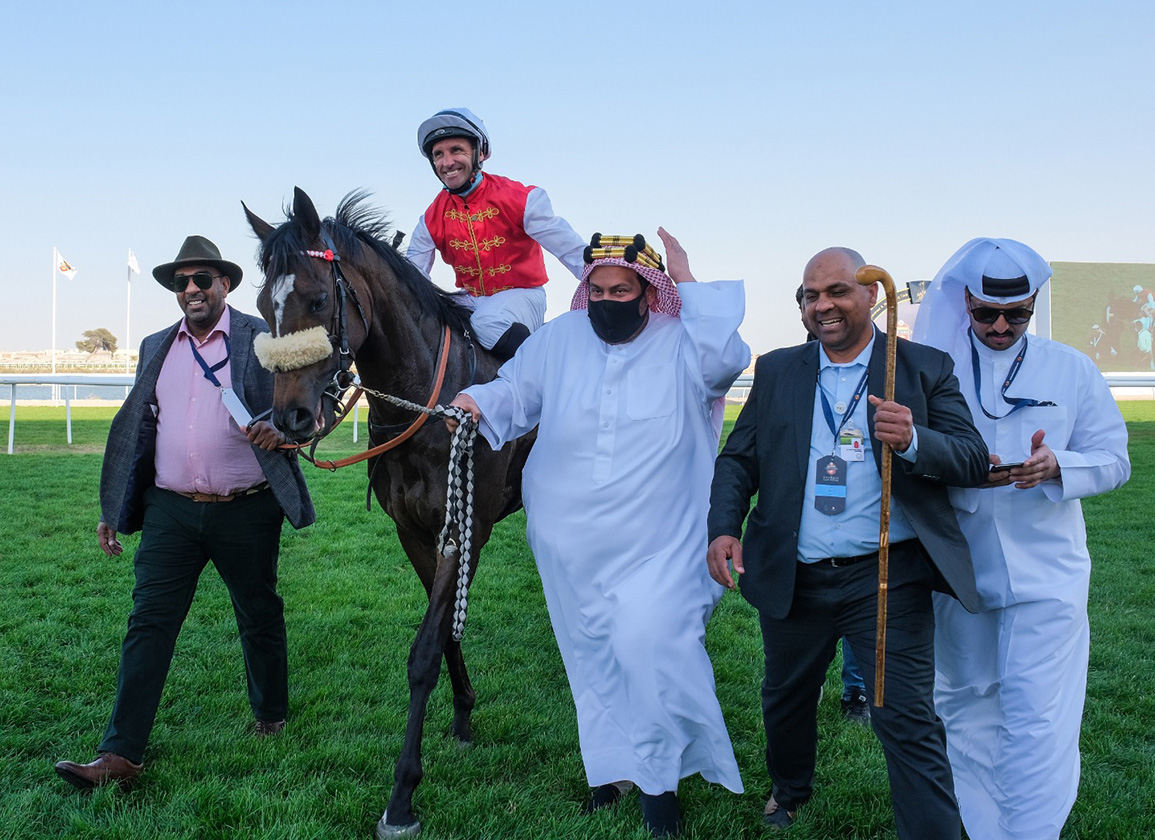 After two months and ten races, the curtain came down on the inaugural Bahrain Turf Series on Friday, with the results of the final two contests having both international and local appeal.

Britain's champion trainer Charlie Appleby fielded his first runners of the series in the seven-furlong Al Sakhir Cup and duly landed the spoils with Silent Film (GB) (New Approach {GB}), who rallied under a strong drive from James Doyle to win by a head from Shebil Aljazira (GB) (Exceed And Excel {Aus}).

The 4-year-old winner was landing his third victory in succession in three different countries, having won a seven-furlong handicap at Sandown back in June and then reappeared at Meydan last month to win off a mark of 94.

“He's a horse we pinpointed for the race so we're delighted he's gone and won,” said Appleby. “It's a great series they have set up in Bahrain and we're just happy that we've been able to find the right horse to come over and be competitive. Everyone is very happy in Dubai, and I'm sure we'll be part of the Turf Series moving forward.”

The following race, the Vision 2030 Cup, went the way of the partnership which is leading the tables in Bahrain his season, with dominant local trainer Hesham Al Haddad, who trains in partnership with Fawzi Nass, claiming his seventh victory in the series with Zagato (GB) (Frankel {GB}) under Neil Callan, the leading rider on the island for the current campaign with 19 wins under his belt.

Shaikh Sultan Aldeen Al Khalifa of Al Mohamediya Racing is a familiar figure both at Tattersalls and on British racecourses, and his visit to Newmarket last September proved to be a fruitful one as he purchased the smartly-bred Zagato from John and Thady Gosden's stable for 55,000gns. John Gosden had also trained her dam, the dual Group 1 winner Izzi Top (GB) (Pivotal {GB}), for breeder Meon Valley Stud.

A winner at Thirsk last year over a mile, the 4-year-old has been gradually finding his feet in his new homeland and he had previously finished third then second in earlier legs of the Turf Series on Dec. 31 and Feb. 5. On Friday, he blew his rival away after skimming the rail round the tight bend for home and blasting through under Callan to win by 6 1/2 lengths.

“Zagato has been an improving horse and he has improved with each start,” said Fawzi Nass. “We'll see what the handicapper does with him but he'll probably get an entry into the King's Cup which is a race run over 12 furlongs so he'll have a further two furlongs to negotiate.”

With $50,000 per race up for grabs in prize-money, the Turf Series also rewards the horse to have earned the most points throughout the series in two distance categories: 'Pot A' is for horses racing over six and seven furlongs and 'Pot B' for those over nine and ten furlongs.

Happy Craf (Arg) (Mastercraftsman {Ire}), trained in Bahrain by Allan Smith and the winner of four of her last five starts, took the $25,000 Pot A bonus, while the Newmarket-trained Arqoob (Ire), representing William Jarvis, landed the same bonus in Pot B, with $15,000 going to his owners and $10,000 to the trainer. Though Arqoob did not win one of the races in the series, he appeared in five of them, placing three times.

Music agent Emma Banks, who is involved in the ownership of Arqoob and who enjoyed a memorable season on the track in 2021 with her Group 1-winning filly Lady Bowthorpe (GB) (Nathaniel {Ire}), said, “What a fantastic bonus to keep him out here. He hasn't won yet but he's been ultra-consistent and passed a lot of horses. It's a really interesting way the points have worked out and makes for an interesting end to the series.”

Arqoob's trainer William Jarvis added, “I'm so thrilled his owners have been able to come out and witness this race. I'm very proud of him, he's been so consistent and the support I've had from Richard, his owner, has been massively appreciated.”

Happy Craf is likely to be seen in action next in Europe, switching from Allan Smith's stable to the Newmarket base of his son Martin.

Allan Smith said, “She deserves it. It's a pity we couldn't run her in the last Turf Series race but she's off to England at the start of April. She'll be targeted at Listed and Group 3 races. Hopefully if she can pick up some black type we can send her to stud and then she can return to Bahrain to foal.”

The Bahrain Turf Series, which got underway on Dec. 10, has been shown through 20 broadcasters around the world via the Racecourse Media Group. Channels to have featured the racing from Sakhir include Fox Sports in America, ESPN in Latin America, Dubai Racing Channel, and Japan's Green Channel.