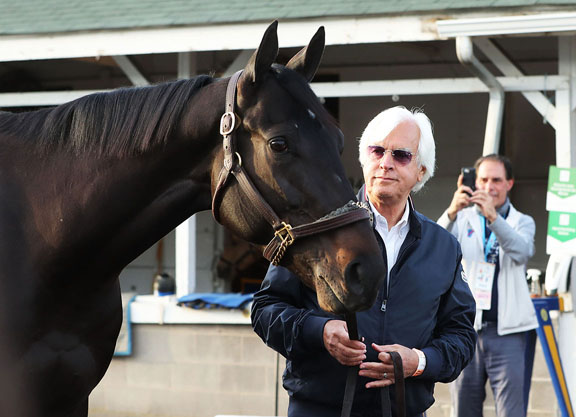 Baffert & Medina Spirit on the morning after the Derby | Coady Photo

Bob Baffert told the media Sunday morning at Churchill Downs that his stable has been informed by the Kentucky Racing Commission that GI Kentucky Derby winner Medina Spirit (Protonico) tested positive for the medication betamethasone in post-race tests conducted after the Derby. In a 13-minute press conference (video) at his barn on the Churchill Downs backstretch Baffert, denied any wrongdoing.

“All I can tell you is that betamethasone is an allowed therapeutic medication, but we did not give it to this horse,” Baffert said. “In fact, Medina Spirit has never been treated with betamethasone. I cannot believe that I am here before you guys. Yesterday, I got the biggest gut punch in racing for something I did not do.”

Betamethasone is a corticosteroid that is used with horses to treat inflammation in joints. Baffert said Medina Spirit tested positive for 21 picograms.

As the sport awaits official word about the positive from the Kentucky Horse Racing Commission, Churchill Downs announced Sunday that it has suspended Baffert from entering any horses.

“Failure to comply with the rules and medication protocols jeopardizes the safety of the horses and jockeys, the integrity of our sport and the reputation of the Kentucky Derby and all who participate. Churchill Downs will not tolerate it,” read a statement issued by the track. “Given the seriousness of the alleged offense, Churchill Downs will immediately suspend Bob Baffert, the trainer of Medina Spirit, from entering any horses at Churchill Downs Racetrack. We will await the conclusion of the Kentucky Horse Racing Commission's investigation before taking further steps.”

While Baffert vowed to fight the latest charges “tooth and nail,” the betamethasone positive could lead to Medina Spirit being disqualified from the Derby. If that happens, runner-up Mandaloun (Into Mischief) would be placed first. Mandaloun is trained by Brad Cox. A racing commission cannot issue a penalty for a drug positive until after a split sample comes back from a second lab, which has yet to happen.

It was not immediately clear Sunday how Pimlico's owner, The Stronach Group, plan to deal with the Derby positive. Banning Baffert from participating in the Preakness is a possibility.

“1/ST RACING and MJC intend to review the relevant facts and information relating to the reported medication positive as a result of the post-race blood sample testing completed by Churchill Downs following the 147th Kentucky Derby involving Medina Spirit trained by Bob Baffert,” read a statement from the Maryland Jockey Club. “We are consulting with the Maryland Racing Commission and any decision regarding the entry of Medina Spirit in the 146th Preakness S. will be made after review of the facts.”

Hours after releasing that statement, The Stronach Group announced it was moving the Preakness draw from Monday to Tuesday at 4 p.m.

Sunday's news is the latest blow to, not just horse racing, but to its most famous trainer. Starting with Justify (Scat Daddy) in the 2018 GI Santa Anita Derby, a number of Baffert-trained horses have tested positive, putting the Hall of Fame trainer on the defensive while trying to explain away why his horses kept failing drug tests.

“I do not feel safe and it is getting worse,” Baffert said. “How do I move forward from this, knowing something like this can happen? It's a complete injustice , but I will fight it tooth and nail. I owe that to the horse and the owner and I owe it to the industry.”

Baffert implied that the problem is not with him, but with a testing system that can lead to trainers getting positives for minute trace amounts of therapeutic drugs.

“I am not a conspiracy theorist,” he said. “I don't think everyone is out to get me, but there is something wrong. Why is it happening to me? There are problems in racing, but it's not Bob Baffert. I want to get that across to you guys. We're going to fight this and I feel this is an injustice.”

“Our industry needs to step up and we need to do a better job,” he added. “There's something wrong right now.”

Baffert said he will conduct his own investigation into the matter in hopes of clearing his name, starting with DNA and hair follicle tests.

“I don't feel embarrassed. I feel like I was wronged,” he said. “We're going to do our own investigation. We will be transparent with the racing commission, like we have always been. We're going to show them everything. One thing about California is that everything is documented, so far as what the horses get. He was never treated with that. He's a great horse and he doesn't deserve this. He ran a gallant race.”

Disqualifying a horse for a drug positive in the Kentucky Derby is not unprecedented. Dancer's Image was stripped of his victory in 1968 after testing positive for bute.

Justify tested positive for scopalamine after winning the Santa Anita Derby, but the Santa Anita stewards eventually decided that the positive test was the result of environmental contamination and upheld his victory.

Next up were positive tests for lidocaine for Charlatan (Speightstown) and Gamine (Into Mischief) issued by the Arkansas Racing Commission after they ran on the card of the 2020 GI Arkansas Derby. Charlatan was initially disqualified from his victory in the Arkansas Derby, but was restored as the winner. Last month, the Arkansas regulators announced that the original results of the race would stand and that a 15-day suspension for Baffert had been overturned. He was handed fines totaling $10,000. Baffert's attorney Craig Robertson successfully made the case that the positives were a result of Barnes inadvertently contaminating the horses because he was wearing a Salonpas patch.

Gamine again tested positive after finishing third in the 2020 GI Kentucky Oaks. Tests showed that she also had betamethasone in her system. In that case, Baffert admitted that the filly had been treated with the drug, but said she was not given any within the suggested withdrawal time for the medication. Baffert waived his right to a hearing, accepted a $1,500 fine from the Kentucky Racing Commission. Gamine was officially disqualified and denied any purse money.

“Gamine was a different story,” Baffert said. “We followed the rules, went an extra four days. We did treat her with [betamestasone]. This horse was not treated with this. That's the scary part. As a trainer, is this the life I have to live now? Do I have to worry every time I win a race?”

While Baffert might once again be exonerated, his reputation may suffer lasting damage as his many critics once again have been supplied with ammunition to cast aspersions on his credibility. With each passing positive, it becomes more difficult for him to maintain his overall innocence.

To the surprise of no one, on Sunday, PETA called for Baffert to be thrown out of the sport.

“The time has long passed for regulators to stop protecting Bob Baffert with minimal fines and finally kick him out of racing,” PETA Senior Vice President Kathy Guillermo said in a statement. “Thirty verified drug violations over his career, with five in just the last year, point to a pattern of cheating that should never have been tolerated these long years. He will undoubtedly come up with yet another implausible excuse, but this time, the regulators need to get a backbone, protect the horses from systematic abuse, and ban him permanently from racing.”

Later Sunday afternoon, The Jockey Club released a statement in response to the Derby positive.

“Along with everyone in the sport, we were troubled by the report today by trainer Bob Baffert of a notice that Medina Spirit tested positive for betamethasone in the Kentucky Derby. We sincerely hope justice is swift, sure, fair, and uniform,” the statement read. “Bettors and fans need to have unshakable confidence in the integrity of the sport. The passage of the Horseracing Integrity and Safety Act (HISA) undeniably will give our sport a far better level of regulation. It is unfortunate that there are still some people in our sport who oppose HISA. We can only conclude that they don't want better regulation.”