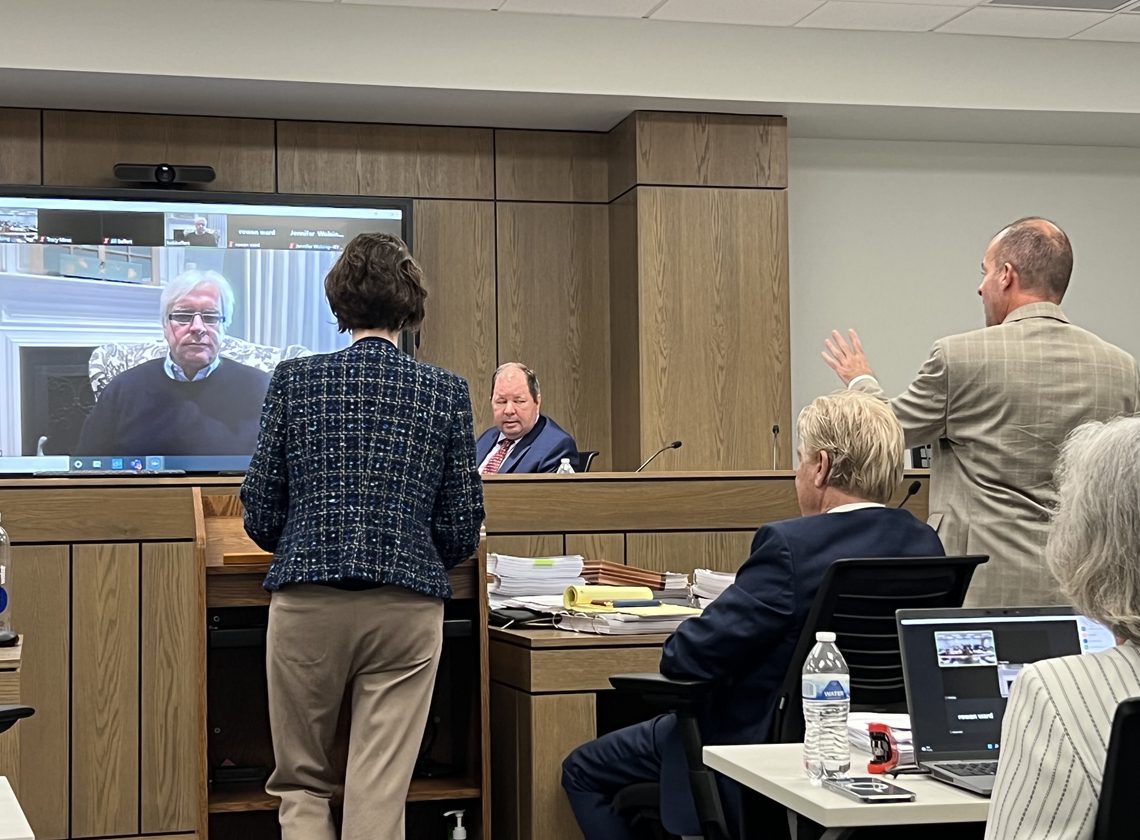 Just a few days short of exactly two years after her third-place finish and eventual disqualification in the 2020 GI Kentucky Oaks, Gamine (Into Mischief) was brought to the forefront once again when Hall of Fame trainer Bob Baffert made his second appearance on the witness stand during the final session of the Kentucky Horse Racing Commission's appeal hearing.

Baffert originally filed the appeal that led to this six-day hearing to clear from his record a 90-day suspension that he has already served and to also reverse Medina Spirit (Protonico)'s disqualification from the 2021 GI Kentucky Derby.

While Baffert was present in the Frankfort, Kentucky court when he first testified on Monday, Aug. 22, he returned to the stand virtually on Tuesday.

Baffert's attorney Craig Robertson began his questioning of Baffert by tackling Gamine's Kentucky Oaks where in her post-race testing, she tested positive for betamethasone–the same corticosteroid that led to Medina Spirit's disqualification from the 2021 Kentucky Derby eight months later. As has been articulated already during the hearing, Baffert explained that Gamine was administered betamethasone via intra-articular injection 18 days before the race, which was outside of the 14-day suggested withdrawal time.

Robertson asked Baffert about his initial reaction upon learning of Gamine's positive test.

“I told my veterinarians at Santa Anita that I do not want the use of betamethasone in my barn,” the trainer said. “They were all aware that we would not inject these horses with betamethasone…I told them the science isn't right. Gamine should never have gotten in trouble…I didn't want any issues and we still got in trouble.”

Later on during the testimony, Robertson presented a similar question when he asked Baffert what his reaction was upon learning of Medina Spirit's positive test for betamethasone.

“It hit me so hard,” Baffert said. “It was chaos. I knew when I got that call that my whole life was going to change that day. I immediately called my veterinarian Vince Baker…to find out what happened. He explained to me that there was no scientific way, that [Medina Spirit] did not get injected with betamethasone.”

Later asked how he has been affected by the events that have transpired since Medina Spirit's positive test was first announced, Baffert said, “It's been tough on everyone because we felt that we didn't break any rules, yet the media was being hard on us. They did a lot of big pieces and used the word 'doping' and all that.”

Robertson's questioning of Baffert also covered the overturned ruling in Arkansas with Gamine and Charlatan, the presentation of a photo of Medina Spirit's skin rash that Baffert said led to the administration of the topical ointment Otomax, and also got into the details of how Baffert was informed of the news that Medina Spirit had tested positive for betamethasone and the events that followed.

When it came time for Jennifer Wolsing, the general counsel for the KHRC, to cross-examine Baffert, Wolsing turned the conversation back to Gamine. She first brought up a point she had made during Baffert's first testimony last week that while the suggested withdrawal time of 14 days for a betamethasone administration is in the case of a single injection, Gamine received injections of betamethasone in both hocks prior to her Kentucky Oaks performance.

“I rely on my veterinarians and I know he treated her 18 days out,” Baffert said in response.

Wolsing then referenced Baffert's previous statement of discontinuing the use of betamethasone in his barn after Gamine's positive. She read a portion of the drug label for Otomax, which included the corticosteroid betamethasone valerate.

“I have to rely on my veterinarians,” Baffert said again. “This horse had a skin rash that was getting ready to get out of control and they jumped on it right away.”

At the close of her cross-examination, Wolsing noted that Baffert won the Los Alamitos Derby with High Connection (Connect) on July 9, 2022 immediately after serving the 90-day suspension.

“You did return and you returned triumphantly,” Wolsing said. “You can't say you're not doing extremely well right now.”

Craig Robertson asked Zedan about his background, how he got involved in U.S. racing and his relationship with Baffert. When asked if he has found Baffert to ever be untruthful or evasive, Zedan was quick to answer.

“To the contrary,” he explained. “And thank you for asking that question because everyone knows that I have a friendship with Mr. Baffert and the fact that I have a friendship is a result of all the good he has done for me and my family since day one…People confuse the person with the persona. People have stereotypes [in differentiating] the persona–with him being the face of the sport, which he actually is-from the person. The person is someone that is outstanding with his family and his friends.”

During his cross-examination by KHRC attorney Luke Morgan, Zedan took an opportunity to defend his trainer and said, “There's no upside for anyone here. The sport we all love has been tarnished. Bob Baffert has served his punishment and has been humiliated. His family's reputation has been dragged through the gutter because of all of this…And frankly speaking, Medina [Spirit] has proven to be the best horse in his crop. He's beaten the horses that competed against him over and over again. The horse, for God's sakes, died. Everyone has been punished. Let's just not punish the horse any further. That's all I ask.”

Tuesday's session concluded with closing arguments from both sides.

Brewster spoke first and opened with a list of 16 'Admitted Facts' that he said he believed all were without genuine dispute. Among them, he explained that betamethasone was ruled by the KHRC as a Class C medication on the basis of it being an intra-articular injection and said the KHRC was not presented with any study or basis for a decision to enact a rule related to a topical treatment that contained betamethasone valerate as a component.

“What we have here is an agency that has made no rule, has had no consideration and has made no decision whatsoever as to a topical ointment involving betamethasone valerate,” Brewster said.

While one of Brewster's main points was that the KHRC rules refer to only the injectable form of betamethasone, Wolsing began her closing arguments with a statement that suggested the opposite of the point that has been belabored heavily over the past 15 months.

“There has been a lot of testimony about ointments and injections and picograms,” she said. “I am here to suggest that we need a dose of common sense. Medina Spirit tested positive for betamethasone. The regulations and the science make no distinction between how the betamethasone got in the horse. If it's positive, it's prohibited…Ultimately under KHRC regulations, like the regulations of every other racing jurisdiction, Mr. Baffert is responsible for the condition of Medina Spirit.”

Using a dry erase board to present her points, Wolsing again brought up the case of Gamine to make the comparison between the events that transpired with both the positive betamethasone test for Gamine, and subsequently, the positive test for Medina Spirit.

Wolsing went on to explain that she believed Medina Spirit's positive test was “even more egregious” because Baffert had been made aware of the limit of detection rule and the 14-day stand down period for betamethasone after Gamine's positive test for the same corticosteroid.

Now that the hearing has concluded, hearing officer Clay Patrick will examine the case. Patrick said that he had 60 days from the time of receiving the transcript to arrive at a ruling that the KHRC may or may not choose to accept. Further appeals may proceed from there.