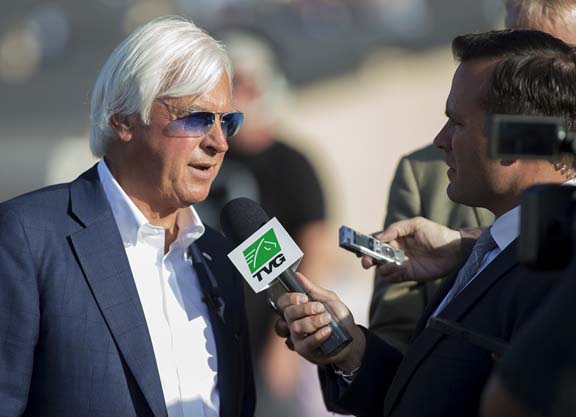 Bob Baffert has had to hit the reset button in pursuit of his record-tying sixth GI Kentucky Derby victory.
Fortunately for the Hall of Fame trainer, he still has the same buttons to push. The first comes Saturday afternoon at Oaklawn when he sends out 5-2 program favorite Thousand Words (Pioneerof the Nile) in the $200,000 Oaklawn S. for 3-year-olds at 1 1/8 miles.

Thousand Words, a $1-million Keeneland September Yearling Sale purchase, is among four highly regarded Kentucky Derby prospects for the Southern California-based Baffert, the others being Nadal (Blame), Authentic (Into Mischief) and Charlatan (Speightstown), who are all undefeated.
But instead of preparing the foursome to run on the first Saturday in May at Churchill Downs, Baffert’s task is now getting them to the first Saturday in September since the Kentucky Derby has been postponed because of the COVID-19 crisis.

Thousand Words had been scheduled to run in last Saturday’s $1-million GI Santa Anita Derby before the Arcadia, Calif., venue announced Mar. 27 that it would temporarily cease live racing in response to the crisis.

Nadal and Charlatan, Baffert said Wednesday afternoon, are scheduled to be sent to Oaklawn for the $750,000 GI Arkansas Derby May 2–the original date of the Kentucky Derby. The 1 1/4-mile race, the first leg of the Triple Crown, is now scheduled to be run Sept. 5.

“Authentic, he’s the only one I’ve backed off of, and I’ve got some other ones that were a little late and could be around,” Baffert said of the new-look Kentucky Derby trail. “If we can get some races into Nadal and Charlatan–then after that we can sort of just go on cruise control for a little bit. This business right now, this life that we live in, it’s hour-by-hour, day-by-day. It’s nice that you guys are still open.”

Charlatan would be making his stakes debut in the Arkansas Derby after winning his first two career starts by a combined 16 lengths.

“We’ll have those in there, if all goes well,” Baffert said. “We’re pointing those two for it.”

Thousand Words won his first three career starts, including a pair of graded events, before finishing a well-beaten fourth behind Authentic in the GII San Felipe S. Mar. 7 at Santa Anita.