Home » Archive » Top News » Baffert Gets His Whitney with McKinzie

Baffert Gets His Whitney with McKinzie 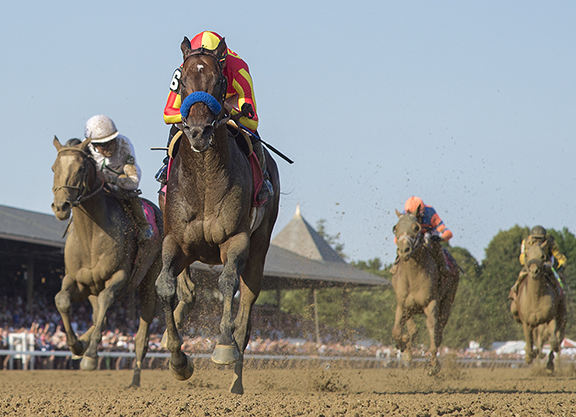 Saturday's GI Whitney S. lost some of its appeal when two-time G1 Dubai World Cup hero Thunder Snow (Ire) (Helmet {Aus}) was scratched sick, depriving fans of a battle with 'TDN Rising Star' McKinzie (Street Sense) in the 'Win and You're In' qualifier for the GI Breeders' Cup Classic at Santa Anita the first weekend in November. Though that clash is on hold for the next eight weeks, McKinzie upheld his end of the bargain, getting a thinking-man's ride from Hall of Famer Mike Smith before holding off a late rally from fellow 'TDN Rising Star' Yoshida (Jpn) (Heart's Cry {Jpn}). Vino Rosso (Curlin) came home a distant third.

Not many feature-race trophies are missing the name 'Baffert,' but the conditioner was welcoming home his first winner of the race, which came 15 days after the passing of Marylou Whitney.

“I was hoping that when I was thinking about running here, I'd never won this race and wanted to see her here, so it's kind of sad. It's a great honor to win the Whitney,” said Baffert. “I've never won the Whitney, so this is a huge moment for me. This win is very emotional for me.”

Monongahela (K One King), a last-start winner of the GIII Iselin S. at Monmouth, won a contested race into the clubhouse turn with McKinzie hustled along by Smith to be a forward factor and GII Suburban S. victor and Whitney second choice Preservationist (Arch) also intent on being in the early mix. Three deep around Monongahela turning up the backstretch, Smith allowed McKinzie to roll forward and lead for a stride or two, but he ultimately let Preservationist overtake him, took a tug and guided McKinzie to the outside heading up the backstretch with 6 ½ furlongs to travel. Racing well off the inside, the pair opened about four lengths on Vino Rosso in a share of third, while Yoshida and Joel Rosario were content to trail. Preservation appeared to be going well enough passing the half-mile marker and opened some daylight on McKinzie, but the complexion of the race began to change nearing the quarter pole, as McKinzie turned up the heat outside the front-runner, Vino Rosso was hitting his best stride four wide and Yoshida was winding up with a five-deep bid from the back of the field. Ridden hands and heels while taking over from Preservationist for good at the three-sixteenths, McKinzie began to pull clear under a left-handed stick and held sway late as Yoshida attacked the line for second before galloping out with the winner.

“I didn't want to be shoved down on the inside,” said Smith, winning the Whitney for the first time since guiding Brunswick to the victory in 1993. “The inside didn't look like the place to be. Everything out in the middle of the racetrack was winning and I saw the option, but I wanted to ride hard enough to separate from the field, so that if I needed to get out, I could get out. It worked today, it might have been a horrible move some other time.”

Added Mike Pegram about the former Los Alamitos executive for whom the 4-year-old is named, “Big Brad was a one-of-a-kind person, and this horse is a one-of-a-kind horse. When Bobby [Baffert] called me and told me we had a good one, I said, 'There's only one name we can give him.' And you've seen him today.”

The conditioner indicated that McKinzie would have one more start prior to the Breeders' Cup Classic.

“Originally, my plan was to run him in the Met Mile and keep him in California,” Baffert said. “I said I need to get a sexy win in him and the Whitney–it doesn't get sexier than that.”

Winner of the GI Pennsylvania Derby and GI Malibu S. last season, McKinzie was runner-up at short odds in the GII San Pasqual S. and in the GI Santa Anita H. ahead of a convincing defeat of Friday's Alydar S. winner Tom's d'Etat (Curlin) in the GII Alysheba S. at Churchill May 3. His last start came in a loaded renewal of the GI Met Mile at Belmont June 8, but he struck interference for the majority of the final quarter mile and could only get to within 3/4 of a length of the victorious Mitole (Eskendereya).

McKinzie's dam, a dual Grade II winner and third in the GI Breeders' Cup Juvenile Fillies at two, was second in the GI Ashland S. in 2005 and sold to Summer Wind Farm for $2.7 million in foal to Storm Cat at Keeneland November in 2006. A half-sister to SW & MGSP Mambo Train (Kingmambo), Runway Model is the dam of the 2-year-old filly Map Maker (Liam's Map), who recently breezed a half-mile in :48.40 at Los Alamitos July 30.