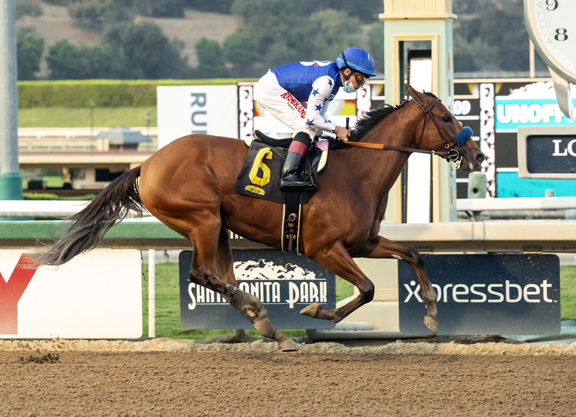 Bob Baffert comes into Sunday's GII Zenyatta S. with a strong one-two punch in the form of Private Mission (Into Mischief) and the regally bred As Time Goes By (American Pharoah–Take Charge Lady). The winner of this event earns a spot in the upcoming GI Breeders' Cup Distaff at Del Mar.

A debut winner at this oval last October, Private Mission checked in fourth in Del Mar's Desi Arnaz S. a month later and was subsequently shelved. Making her belated sophomore bow in a June 12 optional claimer here, the $750,000 FTSAUG acquisition wired the field that day and followed suit with a dominant victory in Del Mar's GIII Torrey Pines S. Aug. 21. The bay was supposed to joined Medina Spirit (Protonico) on a flight to Philadelphia for the GI Cotillion S. last weekend, but both were scratched after the draw and redirected to races against their elders at their home track.

Her stablemate As Time Goes By put on a show in the GII Santa Margarita S. in April, winning by 9 1/4 lengths, and captured the GII Santa Maria S. next out May 22. Fourth to Shedaresthedevil (Daredevil) next out in Del Mar's GI Clement L. Hirsch S. Aug. 1, the dark bay failed to fire when sixth to divisional leader Letruska (Super Saver) last time in Saratoga's GI Personal Ensign S. Aug. 28. Hall of Famer John Velazquez, regular rider of Medina Spirit, stays in town to pilot As Time Goes By for the first time in this event.

Stellar Sound (Tapit) is most likely to round out the trifecta here for trainer Mike McCarthy. A former member of Baffert's shedrow, the Don Alberto homebred romped by seven lengths in her first start for this conditioner in a one-mile optional claimer in October of 2020. Third in the GIII Bayakoa S. in December, she was benched yet again and resurfaced with another optional claimer victory sprinting at Del Mar July 29. The gray was last seen finishing third in Del Mar's 6 1/2-panel GIII Rancho Bernardo H. Aug. 20.