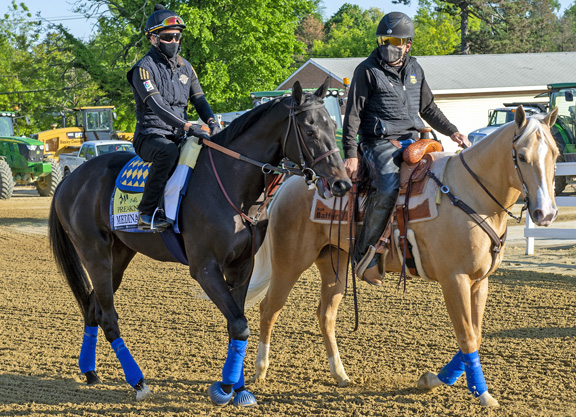 The Maryland Jockey Club (MJC) announced Tuesday that it had accepted the entry of Medina Spirit (Protonico) for Saturday's GI Preakness S.

Trainer Bob Baffert revealed Sunday that Medina Sprit had tested positive for the prohibited medication betamethasone after winning the GI Kentucky Derby, which put his appearance in the second leg of the Triple Crown in doubt. The MJC, which operates Pimlico for The Stronach Group (TSG), had the option of banning all entries from Baffert. Following the announcement of the drug positive, Churchill Downs said that it would no longer accept any entries from the Baffert stable for an indefinite period of time.

Baffert has also entered Concert Tour (Street Sense) in the Preakness and Beautiful Gift (Medaglia d'Oro) in the GII George E. Mitchell Black-Eyed Susan Stakes to be run Friday. Medina Spirit drew post three for the race, which attracted 10 entrants and was made the 9-5 favorite on the Pimlico morning line. The two Baffert runners are expected to be the first and second choices in the wagering.

“I'm satisfied,” said Baffert, who will not be attending Saturday's race because he said he did not want to be a distraction. “It's all part of our commitment to being cooperative and transparent.”

While in Maryland, assistant trainer Jimmy Barnes will oversee the Baffert operation.

Not all the news Tuesday was positive for Baffert. The Daily Racing Form reported that Spendthrift Farm will be transferring some of its horses from Bob Baffert as a result of the controversy surrounding Medina Spirit's positive Derby test.

Among the Spendthrift runners set to leave the Baffert barn will be 'TDN Rising Star' Following Sea (Runhappy), who was under consideration for Saturday's GIII Chick Lang S. The sophomore will now bypass that event and join Todd Pletcher.

The Spendthrift co-owned, Baffert-trained Authentic (Into Mischief) was named 2020 Horse of the Year after winning the GI Kentucky Derby and the GI Breeders' Cup Classic.

“Given the circumstances we thought it was best to hit the pause button,” Spendthrift General Manager Ned Toffey told DRF. “I think we need to step back and let's see how things play out. We're not ruling anything out in the future.”

Toffey said that four Spendthrift 2-year-olds who were sent to Baffert will also be moved, most likely to Richard Mandella.

“Bob gave us the thrill of a lifetime last year,” Toffey told the DRF's David Grening. “Bob has never had a positive test for us. Given the circumstances, the best thing for the time being is to step back.”

Spendthrift is not the only marquee owner/breeder that apparently has a problem with Baffert and the Medina Spirit situation. Daisy Phipps Pulito, a spokesperson for the famed Phipps Stable, announced on Twitter that the stable “has already talked to [trainer] Shug [McGaughey] and won't run in any race at [Pimlico] this weekend where we don't feel like we are running on a level playing field.”

As a condition of acceptance of the entry, Baffert had to agree to let the MJC place Medina Spirit under a microscope that includes rigorous rounds of testing and the constant monitoring of the 3-year-old colt. Baffert also had to commit to full transparency of medical and testing results that will allow for all results to be released to the public.

In a statement released by TSG, also known as 1/ST Racing, CEO Craig Fravel pointed out that a final ruling on the Kentucky Derby positive will not be available until after a split sample has been tested.

“Integrity, accountability and safety in our sport are principles that 1/ST Racing puts above all else. Our company has a track record of instituting process and protocols that have led to nationwide medication reforms and we are unwavering in our commitment to put horse and rider safety at the forefront,” said Fravel. “We are well aware of the public outcry and calls for action that have been the natural outcome of a medication positive in one of the most iconic races in our sport and we share the disappointment and concern.

“We are required to acknowledge in this instance that fundamental fairness compels us to respect the individual rights of participants in our sport to due process and adherence to agreed-upon and well-established rules. To this point, there has to our knowledge been no split-sample testing as is required in every state in this country and no complaint or other official action has been announced by the Kentucky Horse Racing Commission with regard to this incident.  While the integrity of our sport is of utmost importance, it is the responsibility of those in authority to follow the rules even as we seek to enforce them. We cannot make things up as we go along and we trust that the competitors, bettors and fans will understand the importance of adhering to that principle.”

TSG said that the Preakness meet operates under veterinary and testing protocols that are established and overseen by the Maryland Racing Commission's Equine Medical Director, Dr. Elizabeth Daniel. These protocols include out-of-competition testing, tests for TCO2 that can be administered within minutes of the race, and the daily examination of starters by veterinarians affiliated with the racing commission.

Baffert did receive a vote of confidence Tuesday from one important owner, Amr Zedan, whose Zedan Racing owns Medina Spirit.

“Bob Baffert reported today that a topical ointment that was recommended and dispensed by an equine veterinarian to treat a skin rash appearing on the hips of Medina Spirit may have been the contaminant source leading to the post-race positive following Medina Spirit's Kentucky Derby victory,” Zedan said. “I have reviewed the picture of the rash and fully understand the need for care and the good faith intentions in using the ointment supplied by the veterinarian. I want to express my full trust and support for Bob Baffert as we cheer on Medina Spirit in the 146th running of the Preakness this weekend.”