Back In the Game, Hasidic Trainer Still Battling Obstacles 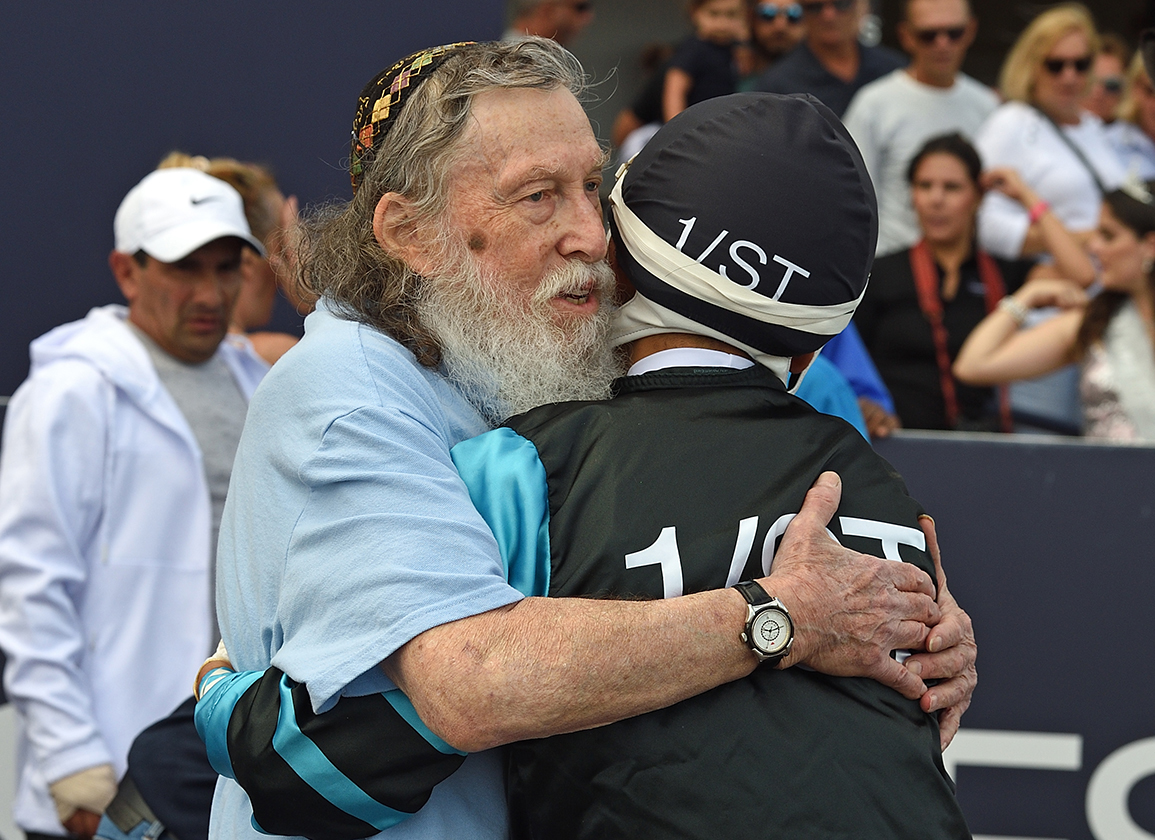 When trainer Gedaliah Goodman sent out Catch That Party (More Than Ready) to a sixth-place finish in a Jan. 30 allowance/optional claimer at Gulfstream Park, it was his first starter in nine years. He had hoped that since he last ran a horse, the sport had moved on and was ready to accept an Hasidic Jewish horse trainer, one who has the long, flowing beard, wears a yarmulke and sports the long sideburns that are known as peyos. Tzitzit, the fringed corners of a prayer shawl, dangle over his trousers.

Sadly, he says that, really, nothing has changed.

“I have a lot of spirit and I'm ready to rock 'n roll,” the 81-year-old trainer said. “I'm ready to go. I just need people to give me a little break.”

Goodman was born in South Bend, Indiana, and grew up in an observant Jewish home. His family later moved to Miami and it was there that he met a bookie who introduced him to the racetrack and he became interested in becoming a trainer. It was about this same that he started to drift away from his religion. He was known then as Alan Goodman and wore conventional clothes. He didn't look any different than anyone else on the backstretch.

He won his first race in 1964 and says he regularly had 25 to 30 horses under his care. His clients included the gangster Meyer Lansky.

Everything changed for Goodman in the mid-seventies, when he decided to rededicate himself to his faith and quit training. Accompanied by his son Zvi, Goodman moved to Israel and studied for eight years in a yeshiva. In 1984, he returned to the U.S. to care for his ailing father. When he left for Israel, he didn't think he was ever going to train again, but quickly found out that he had a desire to start over again in racing.

But this was not Alan Goodman, who wore suits to the racetrack. It was Gedaliah Goodman, the Orthodox Jew who wouldn't train on Saturdays and whose dress and appearance were a bad fit for the racetrack. He would win three, four races a year, sometimes less. From 2008 to 2012 he didn't win a single race.

“I used to have 25, 30 horses or more, but that was before I had the beard and all the rest,” he said. “After I came back from Israel, I'd get people on the phone and they said they wanted to hire me. Then, when they saw me it all changed. They were very intimidated by my appearance and that I am an observant Jew. You think people would be happy that to have someone who believes in God working for them. But God has been put on the back burner these days.

He continued, “I think I can produce for anybody. They just need to look past my appearance. That's the hardest thing. I know I look different. It doesn't seem to bother anybody on the backstretch. Reaching the owners has always been the difficult thing.”

It hasn't just been non-Jews.

“I have more difficulty with my own Jewish people than I do with the non-Jewish people,” he said. “They seem more intimidated by me. They look at me and maybe they feel some kind of guilt trip or something. It's hard for them. I used to be like them. I was very assimilated and I didn't keep to the Sabbath when I was younger. I was away from it and then I came back. I understand it. I don't have any animosity toward anyone.”

Goodman had a winner in 2013, but things spun out of control when he had an accident while saddling a horse at Calder. The horse acted up and struck him, breaking his arm and shoulder and knocking out some teeth. The shoulder problems persisted and Goodman wasn't able to work. Finally, he had made enough progress that his doctor told him he could return to training.

It was not going to be easy. Not only did he have all the same problems that go with his religion and his appearance, he was now an 81-year-old who hadn't trained in nearly nine years and had no horses or potential clients.

While plotting a comeback, Goodman was featured in a lengthy story in Bais Moshiach, a periodical that is read by the Orthodox community. It was read by Shmuel Yaakov Bonnardel, a businessman and a fellow member of the Hasidic community. Bonnardel was interested in owning race horses and reached out to Goodman. On Dec. 2, Goodman claimed Catch That Party for Bonnardel for $50,000. He was back in business.

The horse failed to hit the board in his next two starts, but returned to top form when showing up in the seventh race Mar. 13 at Gulfstream. Last early, he stormed by the leaders in the stretch before drawing off to win by 4 1/4 lengths.

“After I won that race, I kept getting texts from trainers, jockeys telling me how amazing it was how I had been away all the long and came right back with a winner,” Goodman said.

Though Catch That Party went off at 17-1 on the day he won, he was claimed by Mike Maker for owner Michael Dubb. But Goodman wasn't without a horse for long. On Mar. 17 he claimed Lookinlikeaqueen (Lookin at Lucky) for Bonnardel for $20,000. The mare has run twice since, finishing fourth and fifth. Goodman said he is on the lookout for more horses to claim for his owner.

He knows he's unlikely to have a 25-horse barn again. But that doesn't mean that he will be content training just two or three horses for one owner. He knows he can do the job and wants a chance to prove just that. Will it happen? Goodman realizes it may not.

“Here it is I came back after all these years and I keep hearing the same things,” Goodman said. “People say they'd like to hire me, but if they did they'd get thrown out of the country club or their children would stop speaking to them. That's heavy pressure for people and it's still that way today. It's very frustrating.”