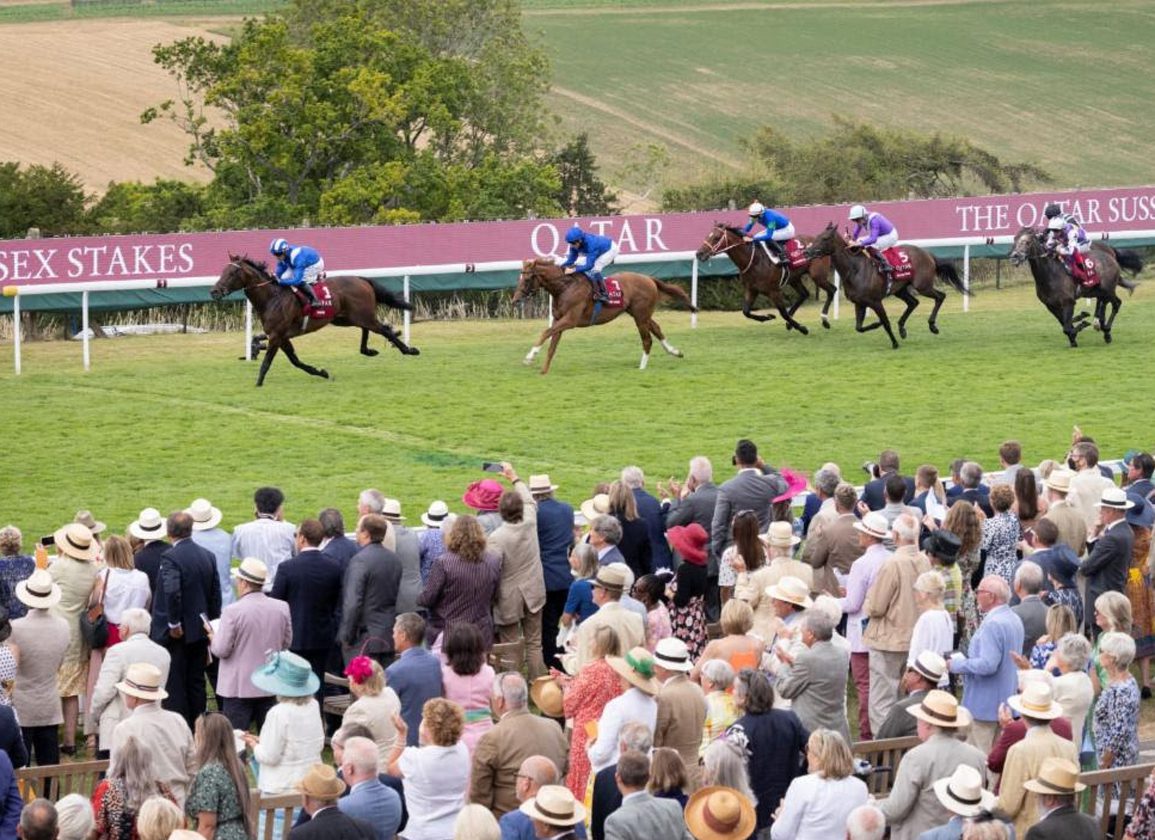 It takes a real good one to make Goodwood's G1 Qatar Sussex S.–a “Win And You're In” for the GI Breeders' Cup Mile–look like a piece of strong work, but then all who assembled on the Downs on Wednesday have come to expect nothing less by now from Shadwell's stellar miler Baaeed (GB) (Sea The Stars {Ire}). Like the champions Rock of Gibraltar (Ire) and Frankel (GB), who stopped off here as they devoured group 1s, the peerless homebred is almost running his own virtual reality race against them by now. The best that has passed through the able hands of William Haggas, the 1-6 shot was able to garner another prize at these heights without a hint of stress as his adoring owner Sheikha Hissa Hamdan Al Maktoum glowed with pride.

Kept wide and out of any potential bother that can afflict even the most talented at this venue, Jim Crowley asked him to shut down the brave front-running Bathrat Leon (Jpn) (Kizuna {Jpn}) heading to the furlong pole and the result was settled in customary rapid fashion. That sprinter's pace he displayed so flagrantly at Royal Ascot took him to the line 1 3/4 lengths to the good over the 3-year-old Modern Games (Ire) (Dubawi {Ire}), despite his rider revealing that he had switched off in front. Last year's winner Alcohol Free (Ire) (No Nay Never) could not land a blow this time, 1 3/4 lengths away in third as she denied the Japanese raider what would have been a worthy placing by a short head.

“That was some feeling, it really was,” Crowley said. “He came into the race between the three and the two unbelievably–he just cruises into it. The race went perfectly and if anything, he shut down when he hit the front so I gave him a couple of taps today. You can see from his demeanour after the race, it takes nothing out of him–he hardly blew. He's a horse of a lifetime and it's a testament to the breeding operation. For sure, he's the best I've ridden–he's something else.”

While the clock had already told us that Baaeed had star material before his emergence at the 2021 Qatar Goodwood Festival, the dynamic colt we now know really emerged here with a 6 1/2-length rout which acted as a springboard to his first assignment at this level in the Prix du Moulin. Comfortable in success in that ParisLongchamp feature, there was not enough in his performance to convince all that he could subdue Palace Pier (GB) (Kingman {GB}) in the Queen Elizabeth II S. but on Champions Day he had the sharper acceleration of the two. This is not a family that stands still and the winter months benefitted him so well that he was able to enjoy a procession in the Lockinge. While the Queen Anne was more of a test due to the ride given to the classy Real World (Ire) (Dark Angel {Ire}), it only served to draw out his ability to perform radically-quick sectionals when most at this trip are tying up.

Anchored towards the back throughout the early stages of this contest which was shaped by the enterprise of Ryusei Sakai on the 66-1 shot Bathrat Leon, he matched strides with Alcohol Free until leaving her behind heading to the cutaway. While the filly was a touch snared in traffic towards the rail, Baaeed's sheer athletic edge was already telling and as he went beyond recall it was left to Modern Games to give closest pursuit. The fact that the runner-up was able to get to within two lengths of the winner at the line makes the loss of Coroebus (Ire) (Dubawi {Ire}) the race's only downside, but the way Baaeed operates puts the pondering of any other outcome into the realms of fantasy.

Now on five straight group 1 wins alongside former turf giants Dubai Millennium (GB), Enable (GB), Giant's Causeway and St Mark's Basilica (Fr), it is on to number six at York as he goes up more than two furlongs for the Aug. 17 Juddmonte International. “I don't see ten furlongs being a problem for him,” his rider added. “He's had an easy time and William can give him a lovely run-in to York now.”

Haggas, a proud Yorkshireman, holds the Ebor week in which the Juddmonte International is encased as close to his heart as any of the great British festivals. He can now relish the lead-up to Baaeed's next examination over an extended 10 furlongs which looks more straightforward after some notable defections over the past week or so. “Today was a big day, but I'm really looking forward to stepping up to ten furlongs, as I think he would enjoy it. We'll go for the Champion Stakes or the QEII, depending on how he gets on at York. It's a relief and we've got him for two more races after this, so let's just enjoy him and make the most of him.”

Sheikha Hissa Hamdan Al Maktoum summed up the emotion of the moment. “For me, and for my family, he means the world,” she said. “He's from the lineage that my father worked hard on and he's a pleasure to have. He has a very calm exterior and loves his work, so that's nice to see from a horse person's perspective. I'm very excited to see him at York–he's ready for a mile and a quarter.”

Charlie Appleby said of Modern Games, who was back at his optimum trip over which he won the G1 Poule d'Essai des Poulains, “He is like his father–he goes down on his sword. Everyone said to me you've got your substitute, but he is no substitute–he has won a Breeders' Cup Juvenile and a French Guineas. I would like to have a few more substitutes like that! He will either go to Canada or Keeneland and then you will see him in Kentucky for the Breeders' Cup Mile.” William Buick summed it up when adding, “It was a race for second and Modern Games came second, so we are delighted.”

Alcohol Free's trainer Andrew Balding commented, “She has run a marvellous race. I thought Rob Hornby did a beautiful job of getting her to settle. She was checked at a crucial stage, but she would not have got anywhere near the winner. However, despite losing some momentum, she has put her head down and stayed on right the way to the line. William Haggas couldn't believe how much she had developed, as you sort of miss it when you see her every day. She has really developed into a fantastic-looking racemare and we are thrilled with her.”

“I am leaving future plans up to Jeff [Smith],” Balding added. “We have entered her in everything over six furlongs up to a mile at group one level. The filly will tell us to a certain extent, but anything is possible. It could be France, the Matron Stakes or the Haydock Sprint Cup. She owes us nothing, but she is thriving at the minute, but as soon as we think she has had enough, that will be that.”

Following the outcome of Saturday's King George, it is with even greater disappointment that the sport has been denied the prospect of seeing Baaeed's full-brother Hukum (Ire) back up his ready G1 Coronation Cup defeat of Pyledriver (GB) (Harbour Watch {Ire}). Also successful in the G2 Dubai City Of Gold and a trio of group 3 races over 12 furlongs or more, it is a foregone conclusion on a pedigree basis that Baaeed will eat up the mile-and-a-quarter-plus of the Juddmonte International.

The dam Aghareed (Kingmambo) won over that trip in the Listed Prix de Liancourt and is a daughter of Lahudood (GB) (Singspiel {Ire}) who achieved champion grass mare status with wins in the Breeders' Cup Filly and Mare Turf and Flower Bowl Invitational. With reference to Height Of Fashion's trio of Nashwan, Nayef and Unfuwain, it is a surprise that the freakish Baaeed possesses what is effectively sprinting speed and that will be a rare weapon at York in three weeks' time. Aghareed also has the unraced 3-year-old filly Zaghaareed (GB) (Intello {Ger}), 2-year-old colt Naqeeb (Ire) (Nathaniel {Ire}) and yearling colt by Night Of Thunder (Ire).