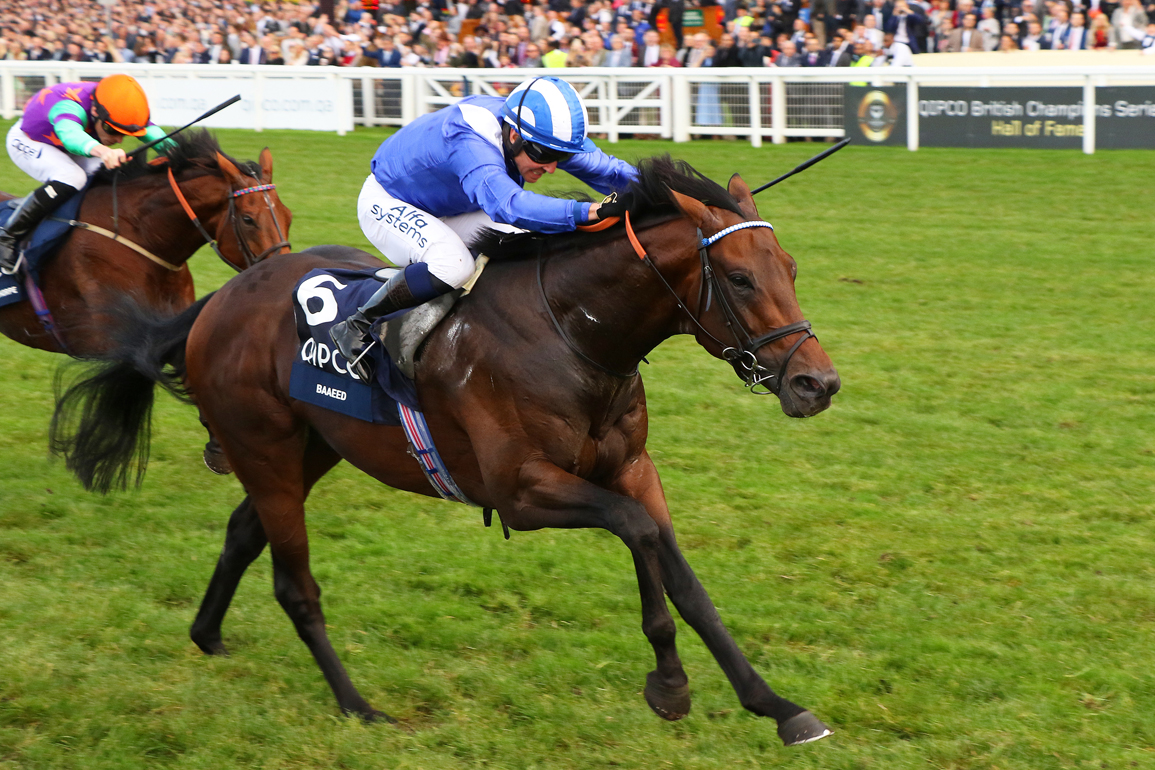 Unbeaten in five prior starts heading into Saturday's G1 Queen Elizabeth II S. at Ascot, Shadwell Estate Company's Baaeed (GB) (Sea the Stars {Ire}) fought back a stellar field in the one-mile Breeders' Cup “Win And You're In” contest to stay perfect with a commanding performance over the track's straight mile. Backing up a Leicester maiden win and a 7 1/2-length novice rout at Newmarket in June, he went three-for-three with a four-length tally in the July 8 Listed Sir Henry Cecil S. back at Headquarters before producing an explosive display in Goodwood's July 30 G3 Thoroughbred S., winning by daylight once more. The homebred bay went postward for this date with destiny coming back off a career high in ParisLongchamp's Sept. 5 G1 Prix du Moulin, but was usurped for favouritism in the betting by the year-older five-time Group 1 victor Palace Pier (GB) (Kingman {GB}). Baaeed was sharply into stride alongside a host of rivals and was eased back from a prominent early position to race several lengths off the tempo in sixth through halfway. Inching closer on the bridle to loom large soon after passing the quarter-mile marker, the 2-1 second choice joined Palace Pier and reigning champion The Revenant (GB) (Dubawi {Ire}) approaching the final furlong and was driven out once gaining an edge to hold the rallying cry of his chief rival by neck. The Revenant paid for his attempt to match the front two in the closing stages and was collared for third nearing the line with the running-on Lady Bowthorpe (GB) (Nathaniel {Ire}) concluding her career by finishing 1 1/4 lengths adrift of the protagonists.

“I think Jim [Crowley]'s words were that he coped with the ground, rather than loved it, and he's beaten the best miler in Europe,” said trainer William Haggas. “What can I say? He's done it and I'm thrilled to bits, but shaking a lot. I watched it, I was walking around a bit and trying to get up to my 10,000 steps a day.”

Fresh off a victory with Eshaada (GB) (Muhaarar {GB}) in the G1 British Champions Fillies & Mares, Crowley added, “I think Baaeed could be a World Champion. He's just a beast, he keeps getting better and it was magical. He's come such a long way in a short space of time and it's a great buzz to ride a horse that good. He was a little bit fresh in my hands because I didn't have any cover, but he was really tough. It was a great race and I thought the first couple of furlongs were sensible enough. Then, from four down, the pace was just relentless, which I thought really suited my lad, and I'm pretty sure he would stay further if he had to. He's got a great mind and there doesn't seem to be any chinks in his armour. He travels so well, the stronger they go in a race the better for him, and he's got a very good turn of foot as well. William [Haggas] has done a fantastic job with him. He probably wasn't 100% going into France and he got the job done, so it was nice to bring him here in tip-top condition. The ground was a bit slow for him and on quicker ground I think he would pick up better, but he's a proper champion. I know Sheikh Hamdan will be looking down, smiling, and I owe him everything. He gave me this opportunity, he chose me to be his jockey and although he's not here to see it, it's nice to be able to repay him.”

“Sheikh Hamdan would have loved this,” insisted Shadwell's racing manager Angus Gold. “It is a great day for the team and his family as he marks his legacy the year he died. One Group 1 winner is enough, but to have two on the big day is very special. Baaeed has shown so much and, no disrespect to his previous opponents, he had never beaten a horse of Palace Pier's class before. It is just very exciting and what a fantastic horse race. Baaeed only started his career in June and it was so exciting to see those two punching away at the end of the year. Baaeed had a proper fight on his hands and he proved up for it. I'm amazed how much speed he has, he stays and has a fantastic attitude. This is a stallion-making race, which is very important for the operation, Sheikha Hissa and her family going forward. That's important for them for the breeding and it's also great to have Eshaada winning a Group 1 too.

Looking ahead to the future, Gold added, “He hasn't had a hard life so far, he has done what has been asked of him the whole way through and I can't see why he wouldn't go on next year. He's done everything we could possibly ask him, we need him as a stallion and he doesn't have to prove himself by going to the Breeders' Cup [meeting]. The plan always was to see him run again next year and I imagined he would be better over a mile-and-a-quarter, but I'm eating my own words now. Sheikh Hamdan's family are very keen to take it on and Sheikha Hissa is very keen. Obviously, it was a huge operation and I think they just felt we needed to trim it, which is perfectly understandable. We have a lot of horses in the sales over the next six weeks and we'll see what we're left with. We'll hope to keep the best ones and we'll have some yearlings to come into training next year. Compared to most owners, it would be fairly sizeable.”

While Baaeed is set to continue on the track, John Gosden indicated Palace Pier is headed to the breeding shed after Sheikh Hamdan bin Mohammed Al Maktoum's 4-year-old suffered the second reversal of an 11-race career. “Frankie [Dettori] said it was a slowly run race and I think if he rode it again he would have committed sooner rather than spending his time looking round,” revealed the trainer. “I think he should have committed earlier because this horse stays a mile well. The winner is a nice horse, but ridden again I think we would have been a little bolder. It's likely that Palace Pier will go to stud now. He's a fabulous horse and he's good-looking. He has run with consistency in Group 1 races throughout his career and I think he will be an exciting horse to go to stud.”

Lady Bowthorpe came oh so close to producing a fairytale ending to her career and ran on with gusto in the dying embers to snatch third nearing the line. She has carried the standard, with aplomb, for William Jarvis's Newmarket stable and this year's G1 Nassau S. heroine heads to the breeding shed on a high. “That effort just shows what a great mare she is and I'm thrilled. I'm also very sad to see her go, she owes us nothing and we are so very lucky to have had her. It's a great story, ending in her putting up a career-best effort against the best two milers in the world. I have a good idea where she will go and, let me say, it will be a quite expensive mating.”

Owner Emma Banks continued, “I can't put it into words how proud I am. She's been such a trooper and if she can deliver [in the paddocks] what she's delivered on the track how special is that going to be? She's won some nice prizemoney so she gets to have a nice husband. I don't know who yet, but we can afford a nice one.”

Baaeed is the fifth of eight foals and one of three scorers out of Listed Prix de Liancourt victrix Aghareed (Kingmambo), herself a daughter of MGISW US champion Lahudood (GB) (Singspiel {Ire}). Lahudood, in turn, is a granddaughter of Listed Cheshire Oaks runner-up Bashayer (Mr. Prospector), herself one of seven black-type performers out of MGSW blue hen Height of Fashion (Fr) (Bustino {GB}). Bashayer, runner-up in the Listed Cheshire Oaks, is a full-sister to dual stakes victrix Sarayir, herself the dam of three stakes winners headed by the G1 1000 Guineas and G1 Coronation S. heroine Ghanaati (Giant's Causeway). Wijdan, another full-sister to Bashayer, ran second in the Listed Pretty Polly S. and is the dam of GII New York S. winner Makderah (Ire) (Danehill) and G2 Premio Ribot victrix Oriental Fashion (Ire) (Marju {Ire}). Bashayer is also kin to five black-type winners headed by MG1SW sires Nashwan (Blushing Groom {Fr}) and Nayef (Gulch). Baaeed is a full-brother to MGSW G3 Cumberland Lodge winner Hukum (Ire) and a half to the hitherto unraced 2-year-old filly Zaghaareed (GB) (Intello {Ger}), a yearling colt by Nathaniel (Ire) and a weanling colt by Night of Thunder (Ire).