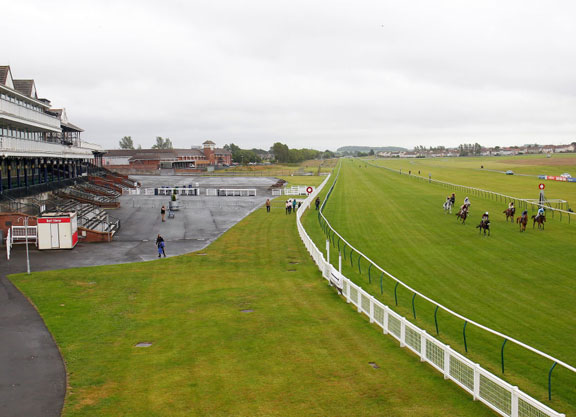 Wednesday’s meeting at Ayr was abandoned after the fourth race after heavy rain was found to have caused patches of false ground. The Scottish track had received more than an inch of rain on Tuesday and it continued to fall during the afternoon on Wednesday, causing conditions to deteriorate.

“Jockeys came in after the third race and reported they felt a bit of false ground,” Clerk of the Course Graeme Anderson told Racing TV. “We had a look but it just seemed to be a wetter area, a heavier patch. They came back in after race four and reported a couple of areas, one about the furlong-and-a-half mark and one about just the half-furlong. We had a look. They were pretty deep holes, just really heavy ground. We’d had eight millimetres since 12:30 [Wednesday] on top of 28mm [Tuesday]. It’s been relentless so it’s taken its toll.”

“It’s right in the centre,” Anderson added. “We looked at trying to run the races on the round course and abandon the sprint race, but there’s a fear you can’t avoid it during a race. It was better to be safe than sorry.

“It’s an area where we’ve never had a problem before. It just seems to be wetter than others and just holding water and the holes are starting to fill with the rain coming down. It’s going to ride false. I’m hoping it’s just a case of the amount of rain we’ve had and it’s nothing more than that, but we will definitely be investigating and see what caused it and see what it’s looking like. It’s two weeks on Monday for our next meeting and then the Gold Cup meeting about three and a half weeks after that.”