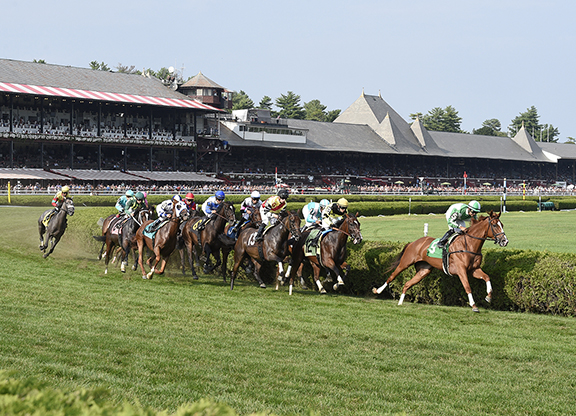 Saratoga Live will feature more than 210 hours of live programming from Saratoga, which runs from Thursday, July 16 through Labor Day, Monday, Sept. 7. Saratoga Live will appear each racing day beginning at 1 p.m. Eastern on FOX Sports and MSG Networks and offer full-card coverage of a Saratoga meet offering 71 stakes worth $14.45 million, encompassing 39 graded stakes, 18 Grade Is and at least one stakes race every live racing day.

In addition to daily national coverage on FOX Sports 2, Saratoga Live will air on FOX Sports 1 for a total of 31 hours, the most hours since the partnership with FOX Sports began in 2016. The daily schedule is available here. Under current New York State guidelines, Saratoga Race Course will open without spectators in attendance, making the extensive Saratoga Live coverage even more important.

“With so many sports still out or just now coming back because of the COVID-19 pandemic, we know a lot of eyes will be on us, particularly at a meet with the prestige of Saratoga,” said Tony Allevato, NYRA's Chief Revenue Officer and President of NYRA Bets. “That's both a responsibility and a tremendous opportunity because life is still not back to normal. It means throwing the usual metrics out the window, doubling down and doing what we do best.”

“We realized back in the spring at Belmont Park that a whole lot of people not that familiar with horse racing were watching us and really getting into our sport,” Allevato said. “That gives us an added responsibility to not just show the races, but to do so with the kind of insight, commentary and features that our on-air team delivers. I put our team up against anyone; they're the best in the business.”

“There are a lot of options out there for viewers,” Allevato said. “But in showing the races and a lot of what goes into them, we're confident that our shows will be entertaining. We have a great thing going at Saratoga and we want people around the country to share it with us.”