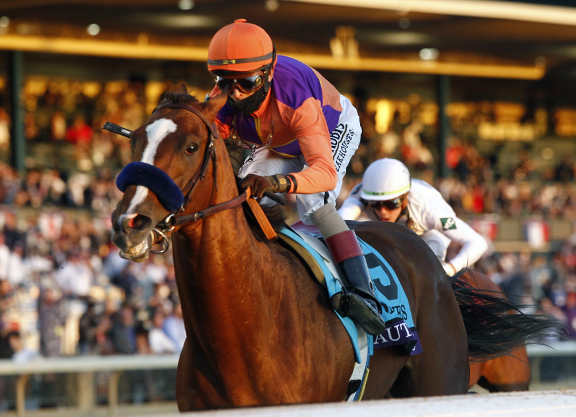 Authentic (Into Mischief), winner of the GI Kentucky Derby and GI Longines Breeders' Cup Classic; 'TDN Rising Star' Improbable (City Zip), a dual Grade I winner and runner-up in the Classic; and Monomoy Girl (Tapizar), who capped a four-for-four season with a second victory in the GI Longines Breeders' Cup Distaff, are the finalists for 2020 Horse of the Year as Eclipse Award finalists were announced Saturday on TVG.

Authentic is one of three individual Eclipse finalists in four separate categories for the all-conquering Into Mischief, whose daughter Gamine was nominated for both 3-year-old filly and champion female sprinter in a campaign that saw her post wide-margin victories in the GI Longines Acorn S. and GI Test S. against her peers and a defeat of fellow dual-category finalist Serengeti Empress (Alternation) in the GI Breeders' Cup Filly & Mare Sprint. Into Mischief's third finalist is Dayoutoutoftheoffice, who defeated Vequist (Nyquist) in the GI Frizette S. in October before the latter turned the tables on Breeders' Cup Friday at Keeneland. Nyquist is the lone freshman sire of 2020 to be represented by a finalist.

Improbable, who is also a favorite for champion dirt male, was a convincing winner of the GI Gold Cup at Santa Anita, the GI Whitney S. and GI Awesome Again S. before falling 2 1/4 lengths shy in the Classic. Monomoy Girl missed the entirety of the 2019 season with a series of setbacks, but proved the queen of the mountain in the dirt female division, completing her undefeated campaign with a smooth win in the Distaff over Valiance (Tapit). She later sold to Spendthrift Farm for $9.5 million at the Fasig-Tipton Night of the Stars and remains in training for a 6-year-old season in 2020.

Vekoma (Candy Ride {Arg}) was also named a finalist in two divisions (dirt male and sprinter), while recent Lane's End Farm import Daredevil is the only other stallion to have multiple finalists, with GI Preakness S. heroine Swiss Skydiver and GI Kentucky Oaks upsetter Shedaresthedevil each in the running for champion 3-year-old filly.

The other Eclipse Award finalists, which include no fewer than six 'TDN Rising Stars' are as follows:

Fire At Will (Declaration of War)

Horse of the Year