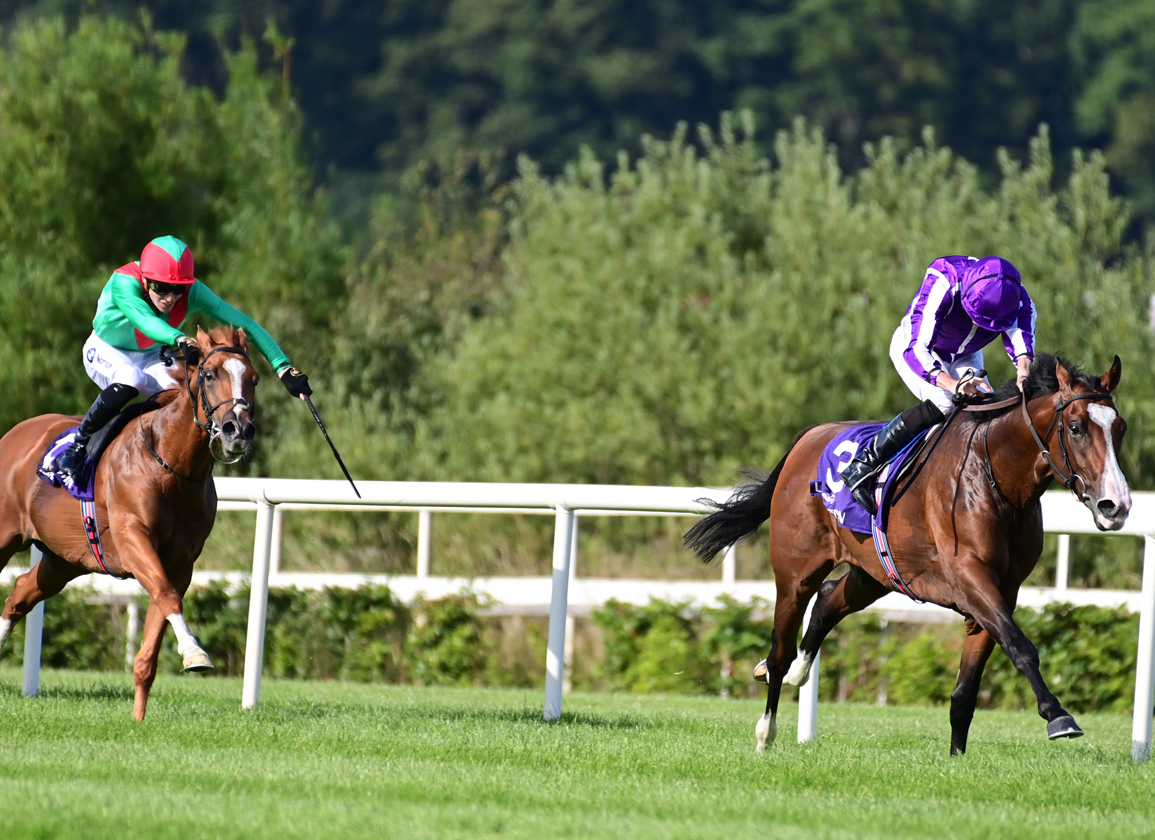 It looked straightforward on paper for Ballydoyle's TDN Rising Star Point Lonsdale (Ire) (Australia {GB}) ahead of Thursday's G3 Japan Racing Association Tyros S. and that was the case as the full-brother to Broome (Ire) justified 1-8 favouritism in Leopardstown's juvenile pointer. Racing in second early after a slightly tardy start, the June 19 Listed Chesham S. winner took control two out and stayed on strongly to register a three-length verdict over Maritime Wings (Ire) (Gleneagles {Ire}). “He got a lead today, which was nice as in his last two races he had to be very forward,” commented Aidan O'Brien, who was registering an eighth consecutive success in this often-informative contest. “He was around a bend for the first time, he loved that ground, put his head down and quickened well. It will be the [G2] Futurity [at The Curragh Aug. 21] and, all being well, then the [G1 Goffs Vincent O'Brien] National [at The Curragh Sept. 12]. He is very off-handed and straightforward and he has no problem over seven furlongs, so he won't be stepping up yet. He looks like he'll stay well, but has loads of speed. From the first day we worked him he was exciting–he was so forward and showing so much, which is why he's where he is today.”

Point Lonsdale, who had the third-placed Unconquerable (Ire) (Churchill {Ire}) 5 1/2 lengths back on his impressive debut at The Curragh June 2 and 6 1/2 lengths behind in this race, is a more precocious sort than his full-sibling who was making his debut at around this time three years ago. Broome, who lines up in Saturday's G1 King George VI and Queen Elizabeth Qipco S., was runner-up in the G2 Champions Juvenile S. and G1 Prix Jean-Luc Lagardere at two before winning the G3 Ballysax S. and G3 Derrinstown Stud Derby Trial and finishing fourth in the G1 Epsom Derby the following season. Back better than ever this term, he has won the G1 Grand Prix de Saint-Cloud, G2 Mooresbridge S. and G3 Alleged S. and been second in the G1 Tattersalls Gold Cup and G2 Hardwicke S.