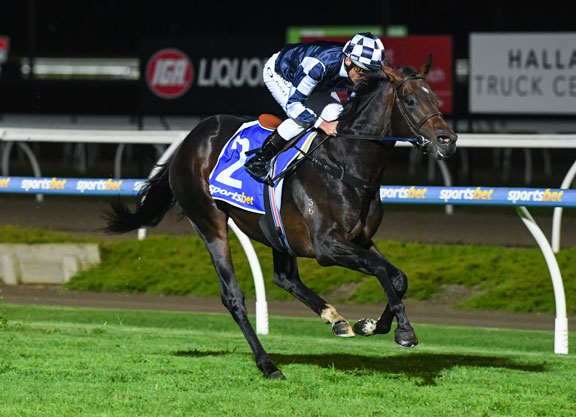 The state of lockdown has given a decent boost to TV viewing figures in Australia, where racing has been allowed to continue behind closed doors. The major feature this week is the Warrnambool May Carnival, which is perhaps best described as Victoria's answer to the Galway Festival, with its mixture of Flat and jumping action and, in a normal year, huge crowds.

It's quieter at 'The Bool' this year but there are a few familiar names among the entries for anyone tuning in from this part of the world. In fact, half the field of 12 for Wednesday's listed Warrnambool Cup were bred in Europe, including the Juddmonte-bred Midterm (GB), a son of two champions in Galileo (Ire) and Midday (GB), and the G1 Gran Premio del Jockey Club winner and St Leger runner-up Ventura Storm (Ire) (Zoffany {Ire}).

In common with plenty of European-bred horses now in Australia, these two geldings both changed hands privately after showing decent form in the northern hemisphere, and over the years plenty of Australian buyers with deep pockets have made their way to the Tattersalls Horses-in-Training Sale, where they've found horses such as dual G1 Australian Cup winner Harlem (GB) (Champs Elysees {GB}). Form comes at a price, however, and the group of owners who bought Harlem from Juddmonte had to give a sale-topping 520,000gns even before the cost of shipping the horse to Australia.

It is perhaps no surprise then to find Australian trainers and agents shifting their focus towards the yearling and even foal sales to find horses with good middle-distance pedigrees but at a price which represents a little more value.

Bloodstock agent John Foote was one of the trailblazers in this regard, and in fact one of his Tattersalls yearling purchases, Furrion (GB) (Camelot {GB}), won last year's Warrnambool Cup having been picked up from October Book 2 in 2016 for 60,000gns. Foote was also responsible for buying another Book 2 graduate and this year's G1 Australian Cup winner, the Airlie Stud-bred Fifty Stars (Ire) (Sea The Stars {Ire}), whose record now stretches to five group victories.

Danny O'Brien gave the Australian breeding industry a boost last November when sending out the locally-bred Vow And Declare (Aus) (Declaration Of War) to victory in the Melbourne Cup but, in common with many of his fellow leading trainers, his stable contains a number of youngsters bearing GB and IRE suffixes. O'Brien has also made a point of focusing on the European yearling market and one of the early recruits to this project is set to line up in Saturday's G1 South Australia Derby.

Russian Camelot (Ire) (Camelot {GB}) was bred by Lynch Bages & Camas Park Stud and was selected for O'Brien by agent Jeremy Brummitt, with whom he works regularly. Ever since he made his eye-catching debut at Ballarat last October when still a 2-year-old by northern hemisphere reckoning but running against Australian 3-year-olds, the colt has been the subject of plenty of interest and is held in the highest regard by his trainer. So much so that after he was narrowly beaten in a listed race on Oaks day at Flemington last November, O'Brien and jockey Damien Oliver were mulling over the idea of bringing Russian Camelot back to Europe to run in the Derby at Epsom. Coronavirus has of course scuppered many people's hopes and dreams but Russian Camelot, whose ownership group includes Britons Mark Edwards and Melvyn Ford, will have his Derby day this weekend at Morphettville.

“We've got two 3-year-olds, Russian Camelot and an unraced horse by Champs Elysees,” says O'Brien. “We went back to Tattersalls last October and, between the horses I bought and some bought by my clients, I now have six 2-year-olds—a couple of Camelots, an Australia (GB) colt, a Sea The Stars (Ire), a Le Havre (Ire) colt and a Teofilo (Ire) colt. So they are all by really nice stallions and they are horses that we just don't have access to.”

He continues, “Obviously there is a good deal of shuttling that goes on but none of those stallions are available in Australia and, likewise, the pedigrees that we are buying are good and strong. They're not all from Tatts Book 1 but some of them are, and on a dollar-for-dollar basis, I think they are terrific value next to horses that you buy either at Inglis Easter or Gold Coast Magic Millions. We are landing them back in Australia for between 200,000 and 400,000 Australian [dollars] and they are top-class horses by world-class stallions out of the best sales in Europe.”

In northern hemisphere terms, Russian Camelot only turned three on Mar. 29, but he has been running against Australian 3-year-olds since his Oct. 11 debut. He has now won two of his four starts but was forced to miss his intended Derby prep race on Anzac Day (Apr. 25) at Flemington with an inflamed throat.

O'Brien says of the colt out of the Cape Cross (Ire) mare Lady Babooshka (Ire), “We're still finding our way with the age differential but we haven't found a big issue, hence we're hoping he runs in a Derby on Saturday, albeit at an age disadvantage. We're very happy with him. He had a jump out at Flemington on Friday on the course proper and that should have him exactly where we need him for the Derby.”

“I've always believed that people confuse precocity and speed, and that we should be trying to breed horses and buy horses that mature and last for more than one season,” he says.

“What appeals to me about [buying yearlings for] Australia is that I want to buy that profile of horse, and if he is exceptionally good he can meet the targets up here and if he's not quite so good he can earn more money down there. Danny realised that and was smart enough to get in early and take them down there. I suspect Russian Camelot is a bit of a freak. He was the first one out and I think the bigger the focus group we have the more we'll realise how difficult it is to compete with that age difference, but even if we are behind in terms of maturity I think we are well ahead in terms of ability.”

Brummitt cites the example of the 4-year-old Grand Promenade (GB) (Champs Elysees {GB}) as an example of a typically progressive middle-distance campaigner.

He continues, “I bought him as a foal few years ago and he was bought by John Foote as a yearling. He went to Ciaron Maher and has won four in a row this season. I would have thought that he is the more typical profile of what you can expect by sending a horse to Australia, even as a yearling. I would say the advantage still lies with going that way because the Australian is getting an undamaged horse that he is training for his own ends, rather than one who has been sent to Australia as an after-thought.”

Danny O'Brien follows a very similar routine to that which the yearlings would face if they remained in Europe after the sales. He explains, “They go straight from the sale grounds into quarantine so they do two weeks there and another two weeks once they reach Australia. We break them in straight away, usually around the middle of November, and we've found that then break in really well. They are getting out of the cold in Europe and coming into our summer which they seem to appreciate, and then we just treat them like any other horse. We're only just into it—Russian Camelot is the first one of the first year and we were probably surprised by how early he raced, but having said that he effectively raced as a late-season 2-year-old in his own hemisphere. He had his first start in October, so there would have been a lot of horses from his own vintage who would have done a lot more racing than that by then.”

O'Brien adds, “Obviously before us Gerry Ryan brought those horses down, like Fifty Stars and Furrion, and they've been successful. I certainly think the value is there and the horses themselves are performing, so as long as that continues I'm sure there will be more people looking into doing it.”

As well as buying yearlings with O'Brien, Jeremy Brummitt also works with the British-based Quantum Leap Racing syndicate which focuses on selecting staying-bred youngsters to race in Britain at two before looking to sell them on with some early form in the book to Hong Kong or Australia. O'Brien will soon be taking charge of the 100-rated Wyclif (GB) (Archipenko), who won two of his four starts last season for Ralph Beckett and was runner-up in the listed Silver Tankard S. at Pontefract.

“I met Danny through Mark Edwards, who is one of the owners in Russian Camelot and Wyclif, and Danny is a great guy to work for because I can say to him, 'trust me this will be all right down there', and he's not bothered, whereas most people like to have a horse by a stallion they recognise,” says Brummitt, who buys the Quantum Leap horses in association with syndicate manager Eamonn O'Connor.

“We've sold half of Wyclif to an Australian syndicate but Quantum Leap Racing will retain half the interest in that horse. We also send horses to Hong Kong but the difference is that we can't own horses in Hong Kong whereas we can own horses in Australia.”

Brummitt's quest for the durable horse has been demonstrated to great effect by the Australian Group 2 winners Gallic Chieftain (Fr) (Tamayuz {GB}) and Lord Fandango (Ger) (Lord Of England {Ger})—both now owned by OTI Racing—who have a total of 84 starts and 14 wins between them. Both are still in training at the age of seven and were bought by the agent as yearlings with this long-range view in mind.

He adds, “I hope that we can increase that side of the business—though nothing can be taken for granted in the current environment. I hope we can continue to send horses to Danny as yearlings and that we'll be able to send older horses as well. Our aim is to not squeeze the lemon dry up here but to campaign the horses with a global view.”