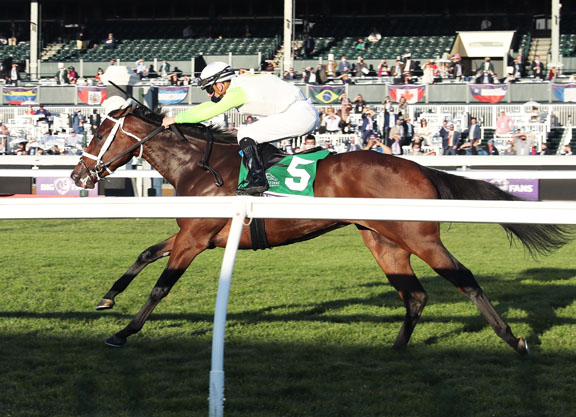 Aunt Pearl (Ire) (Lope de Vega {Ire}) came into Friday's GI Breeders' Cup Juvenile Fillies Turf undefeated in two prior starts and made good on 5-2 favoritism to remain undefeated with an authoritative 2 1/2-length victory. Out of the gate like a shot, Aunt Pearl went straight to the front and opened a two-length advantage over undefeated French Group 1-winner Campanelle (Ire) (Kodiac {GB}) through a quarter mile in :22.55. Still moving comfortably through a :47.30 half, the Brad Cox pupil was clear turning for home, turned on all boosters in the stretch and despite Miss Amulet's (Ire) and Mother Earth's (Ire) best efforts to close on the pacesetter late, both was unable to reel in the favorite, five lengths in front at the wire. Mother Earth bested Miss Amulet by a neck for second.

“That was a devastating performance,” said Cox. “She is an amazing filly. Very proud of her. Speed is her weapon and she knows how to use it. I was pretty confident [she would win] when I saw the :47 and [jockey Florent Geroux] obviously knows her well.”

Geroux added, “I know she is extremely fast. I just tried to get away good. She was off to a flying start. She went pretty quick early on and after that I tried to get her to relax. On the backside she came back to me. When I asked her, she had plenty left. She's extremely talented. I think the sky is the limit for her. Over the winter, hopefully, she'll grow a little bit and next year we can do it again.”

Bred by Ecurie des Charmes and Ballylinch Stud, the 280,000gns TATOCT purchase was part of a European venture put together by BSW/Crow Bloodstock's Brad Weisbord and Liz Crow. She was one of nine fillies purchased for this group of five American owners.

“Liz Crow, who bought Monomoy Girl and British Idiom for us both, along with Brad Weisbord had an idea of going to Europe and trying to do the same thing,” said co-owner Sol Kumin. “So we put a group together and Mike [Dubb] and I were sort of the first two that were part of it and then we filled it in with some other members..And from the beginning we knew she was one of the better ones in the group. I think she obviously turned out to probably be the best one. Brad Cox has liked her from the beginning. Paul Sharp did a great job breaking her in Ocala and we really are happy about where we are.”