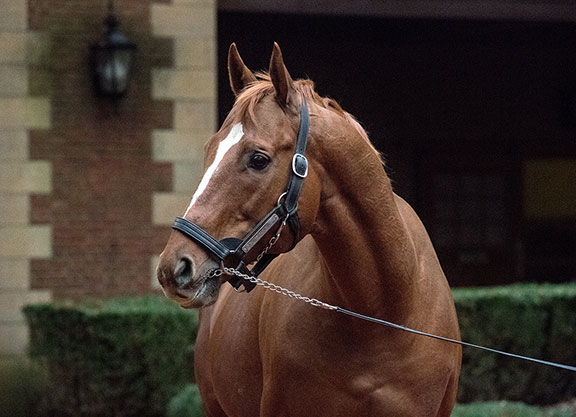 Trainer Mark Casse sends out a pair of regally bred fillies in Friday's fifth event at Ellis. CRYSTAL GLACIER (Curlin), a daughter of the same stallion that lit up the Fasig-Tipton Saratoga sales ring during Monday's session with three seven-figure colts, was acquired by Live Oak for the sum of $500,000 as a yearling at that sale a year ago. The dark bay hails from the family of Grade I winner and sire Majestic Warrior (A.P. Indy) through her second dam, the multiple Grade I victress Dream Supreme (Seeking the Gold).

Casse's other runner, Go for Mo (Uncle Mo) dropped the hammer for $190,000 at the OBS April Sale after breezing a quarter mile in :21 4/5. The HRH Prince Sultan Bin Mishal Al Saud-owned runner is a half-sister to Champion sprinter Kodiak Kowboy (Posse) and the multiple stakes-winning Wilbo (Candy Ride {Arg}). The fleet-footed filly drilled a bullet half-mile in :47 4/5 (1/39) Aug. 1 at Churchill Downs. TJCIS PPs

Peter Brant's INDOCHINE (War Front) has breezed several times in company with stablemate Sketches of Spain (Ire) (Lopa de Vega {Ire}), who graduated in her debut Aug. 4 at the Spa for trainer Chad Brown. The $470,000 Keeneland September yearling purchase is out of the mare Fascinating (Smart Strike), a half-sister to Grade I winner and blue chip stallion Bodemeister (Empire Maker). Fascinating finished a narrow second to eventual 2013 Champion 2-year-old filly She's a Tiger (Tale of the Cat) in the GI Del Mar Debutante S. as a juvenile.

Divided Sky (Ire) (Society Rock {Ire}) breaks just to the outside of Indochine for the always dangerous barn of Wesley Ward. The e Five Racing Thoroughbreds-owned filly is a half-sister to Lady Prancealot (Ire) (Sir Prancealot {Ire}), who captured the June 1 GIII Honeymoon S. over the Santa Anita lawn. Her unraced dam Naqrah (Ire) (Haatef) is a sibling to the producer of Almanaar (GB) (Dubawi {Ire}), the track-record setting conquerer of the May 25 GII Monmouth S. Almanaar claimed the GI Gulfstream Park Turf H. for trainer Chad Brown in 2017. TJCIS PPs