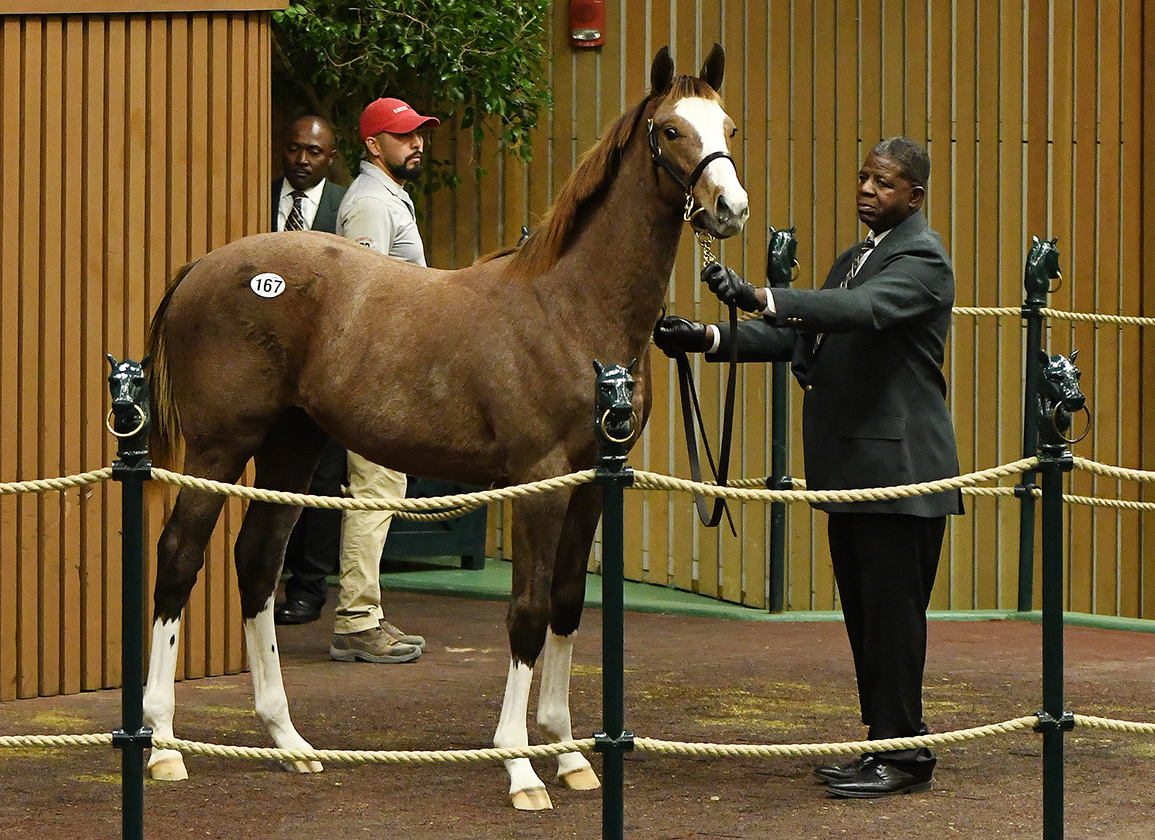 An intriguing group of juvenile colts seek their diplomas Saturday on the GI Whitney S. undercard. The most expensive of the group is OXO Equine's IMMOKALEE (Curlin). The $750,000 KEENOV acquisition is out of MGSP Banree (Macho Uno), a half-sister to MSW & MGSP Superstition (Ghostzapper) and GSW Gloryzapper (Ghostzapper). Chad Brown unveils a colt from the first crop of the late Arrogate in $590,000 KEESEP buy Big Skipper. The bay is a half to MSP Summer Reading (Hard Spun) and GSP Heart of Paradise (More Than Ready). Their dam is a half to GSW Megascape (Cape Canaveral) and SW Richest Half (Rizzi). Steve Asmussen saddles a pair of first timers in Vodka Mardini (Bernardini) and Stellar Tap (Tapit). Vodka Mardini is the first foal out of GSW & GISP Hot City Girl (City Zip), a half-sister to the late champion sprinter La Verdad (Yes It's True). A $250,000 KEESEP purchase, Stellar Tap is out of a half-sister to GISW Nereid (Rock Hard Ten) and SW & GSP Sea Queen (Lemon Drop Kid). Phipps homebred Imminent Storm (Flatter) debuts for Shug McGaughey here. The gray's second dam is champion Storm Flag Flying (Storm Cat), who of course is a daughter of MGISW My Flag (Easy Goer). Tony Dutrow saddles Predicted (Tapit) in his career bow. His full-sister Sweet Loretta won the GI Spinaway S. at this oval, as well as the GIII Schuylerville S. This is also the family of Canadian champion Spring in the Air (Spring At Last). Todd Pletcher sends out a second timer worth a look in Keepcalmcarryon (Union Rags). He was second on debut behind an impressive performance from stablemate and 'TDN Rising Star' Wit (Practical Joke), who went on to take the GIII Sanford S. in his next start. The bay is out of SW Lavender Chrissie (Scat Daddy), a half to GSW Baby J (J Be K) and SW & GISP Laureate Conductor (Bernstein). TJCIS PPs

Bob Baffert saddles a pair of expensive first time starters in FLYING DRUMMER (Gun Runner) and Montebello (Curlin). Donato Lanni signed the $850,000 ticket on Flying Drummer at OBS April on behalf of Michael Lund Petersen after the colt breezed in :10 flat. The gray is out of SW & GSP Salamera (Successful Appeal), who is a half-sister to the SP dam of MSW & GISP Piedi Bianchi (Overanalyze) and MSW & GISP Outadore (Outwork). The group known as the Avengers went to $400,000 at KEESEP to acquire Montebello. The bay is out of MSW & GISP Beautiful But Blue (El Corredor), who is a daughter of MSW NY-bred Beautiful America (Dixie Brass). Richard Mandella unveils Forbidden Kingdom (American Pharoah) for MyRacehorse and Spendthrift Farm. The $300,000 FTKSEL buy is out of GSW Just Louise (Five Star Dady), a daughter of MGSW Sara Louise (Malibu Moon). TJCIS PPs