Home » Archive » Shared News » At 84, Reynaldo Nobles is Back in the Game

At 84, Reynaldo Nobles is Back in the Game 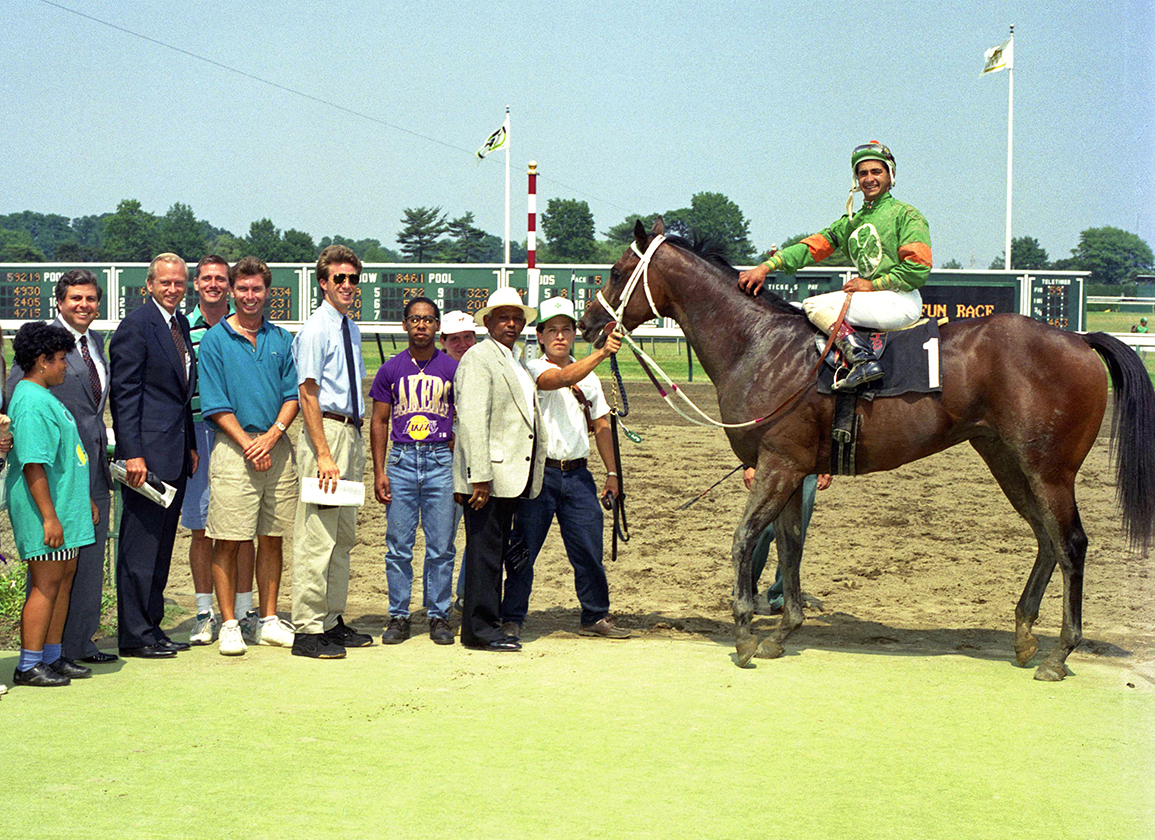 Dehere breaks his maiden at Monmouth Park in the fifth race on 6/30/93 with Joe Bravo up.  In the winners circle are Owner Robert Brennan (3rd from L) and Trainer Reynaldo Nobles (C). |  Bill Denver/EQUI-PHOTO.

For Reynaldo Nobles, it was nice to have something to do. His jobs over the last few years included working as a security guard at Palm Meadows and as school crossing guard. But even as he got into his early eighties, he never gave up on the idea of training horses again.

His dream became a reality last month at Tampa Bay Downs. Now 84 and more than eight years after he had run his last horse, Nobles was back in the entries and back in the winner's circle. The win was delivered by a $10,000 claimer named Indian Buzz (Creative Cause), who is owned by Nobles's daughter, Jennifer.

“This is his motivation and it keeps him going every day,” Jennifer Nobles said. “It keeps him so happy. He still watches horse racing every day.  Just to be a part of it again has been a dream come true.”

Nobles, a native of Cuba, started his first horse in the U.S. in 1971 and won a training title at Gulfstream in 1983. He got his big break when Robert Brennan hired him to be his private trainer. He trained Deputy Minster during the latter part of his career and was the trainer of Dehere. A sensation as a 2-year-old, Dehere was named juvenile champion in 1993 after winning the GIII Sanford S, the GII Saratoga Special S., the GI Hopeful and the GI Champagne.

Brennan's legal problems, which included his conviction in 2001 on money laundering and bankruptcy fraud, meant the end of his Due Process Stable. For Nobles, the days of training quality stakes horses were over. He won only six races in 2004 and stepped away from the game for seven years. He launched a comeback in 2011 and had his best year in 23 years when sending out 36 winners in 2013. But health problem caught up with him.

“I had a little problem with arthritis and it was getting bad so I decided to stop,” he said.

Nobles still has physical issues that might have stood in his way of a comeback, but his daughter figured out a way to work around them. Her teenage son, Anthony, 19, got involved in racing and started working as a hotwalker and a groom. He could do the heavy lifting for his grandfather and Nobles could teach his grandson the business.

“Anthony has pretty much grown up with the horses,” Jennifer Nobles said. “So I figured it's now time for us to start a family business.  He helps my dad. My dad can't walk as good as he used to. It's a little bit harder for him to get back and forth, but with my son now helping him it's a lot easier.”

Jennifer Nobles has owned Indian Buzz for about a year and had been using Tony Wilson as her trainer. With the timing right for her father to take over, Nobles was listed as the trainer for the Jan. 23 race, which Indian Buzz won by three-quarters of a length.

“To do this along with my grandson really makes me feel good,” said Nobles, who lives with his daughter and grandson in Tampa. “It feels very good to be able to work with the horses again.”

Nobles was a Monmouth Park mainstay for years and the plan is for him to return to the Jersey Shore track this summer. His daughter said she will be on the lookout for a few more horses for him to train.

“My father is so excited to be back,” Jennifer Nobles said. “This is so good for him.”