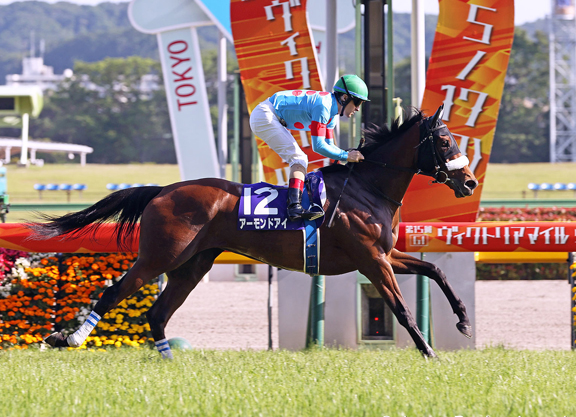 Almond Eye (Jpn) (Lord Kanaloa {Jpn}) is likely to have the final start of her illustrious career in the G1 Japan Cup (2400m) at Tokyo Racecourse, her trainer Sakae Kunieda announced through the Twitter account of the Silk Horse Club syndicate that campaigns her.

The 5-year-old daughter of Fusaichi Pandora (Jpn) (Sunday Silence) swept the Japanese Filly Triple Crown in 2018 and capped a Horse of the Year campaign with a smooth 1 3/4-length defeat of front-running Kiseki (Jpn) (Rulership {Jpn}) in the Japan Cup. She added the G1 Dubai Turf and G1 Tenno Sho (Autumn) last season and most recently became the first horse in the history of the Japanese turf to win eight Group 1 races when successfully defending her Tenno Sho title Nov. 1.

Also confirmed for the Japan Cup are the twin Triple Crown winners of 2020, the colt Contrail (Jpn) (Deep Impact {Jpn}) and Daring Tact (Jpn) (Epiphaneia {Jpn}), neither of whom has tasted defeat in their careers.

Almond Eye's connections opted for the Japan Cup over a trip to Hong Kong for the G1 Longines Hong Kong Cup Dec. 13, a race for which she was entered last term, but did not ultimately make the journey. Sha Tin is the destination for another Asian-based runner, as connections confirmed that three-time defending champion Hong Kong jockey Zac Purton has accepted the call aboard Inferno (Aus) (Holy Roman Emperor {Ire}) for the G1 Longines Hong Kong Sprint. Trained by Cliff Brown for owner Glenn Whittenbury's Barree Stable, the 4-year-old is eight-for-nine lifetime and exits a flashy success in the Oct. 25 Lion City Cup at Kranji Racecourse in Singapore.