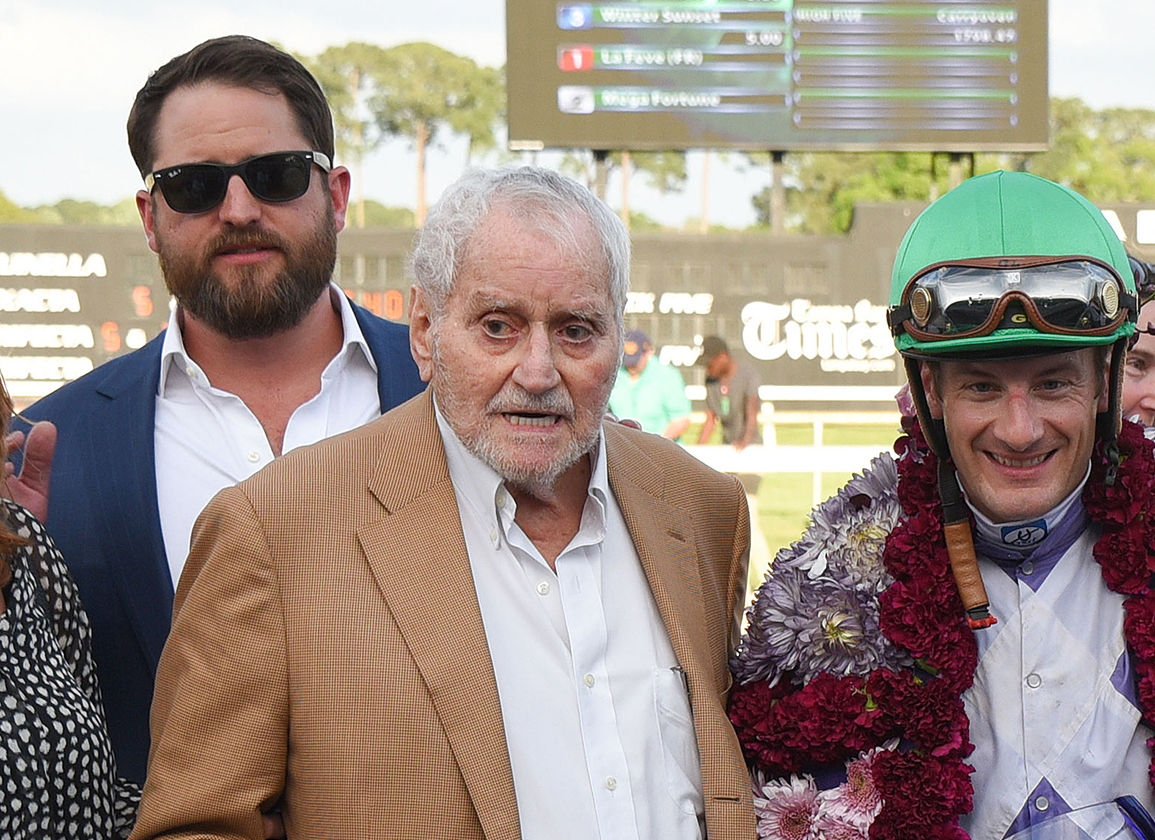 Owner Glenn Bromagen, who raced under the name of Ashbrook Farm, passed away Tuesday at his home in Versailles, KY. He was 90.

An Air Force veteran, Bromagen graduated from the University of Kentucky in 1955 and shortly thereafter moved to Chicago, where he worked at the Union Stock Yards for Armour and Company. The native of Sharpsburg, KY joined the Chicago Mercantile Exchange as a cattle broker and then co-founded the brokerage firm, Rufenacht, Bromagen and Hertz, where he flourished professionally.

He bought his first racehorses in the late 60's while living in Chicago and was known to be an avid horseplayer who frequented the Illinois tracks. Bromagen began with trainer Tommy Kelly and won his first graded stakes in 1974 when capturing the GIII Pucker Up S. at Arlington Park. That same year, he won the GIII Clark H. with Mr. Door. In 1980, he had a starter in the GI Kentucky Derby in Tonka Wakhan, who finished 10th for trainer Glynn Bernis

In the early 1980s, Bromagen decided to return to Kentucky and purchased Ashbrook Farm in 1982. Among the reasons he returned to the Blue Grass State was that he wanted his children to be raised in his beloved Kentucky.

Bromagen enjoyed his greatest successes in racing after teaming up with trainer Rusty Arnold. They enjoyed success early on with Tricky Creek, a winner of four graded stakes, starting with the 1988 GII Brown & Williamson Kentucky Jockey Club S.

After he graduated from college in 2007, Bromagen's son Bo came on board as Ashbrook's racing manager and helped lead the stable to new heights. In 2007, Ashbrook won the GI Lane's End Breeders' Futurity with Wicked Style (Macho Uno). In 2016, Ashbrook's Weep No More (Mineshaft) won the GI Central Bank Ashland S. In 2018, the stable unveiled Concrete Rose (Twirling Candy), who won the GII Jessamine S., the GIII Florida Oaks and the GI Belmont Oaks Invitational S. The filly was owned in partnership with BBN Racing. A $61,000 Fasig-Tipton Midlantic 2-year-old, she topped the 2020 Keeneland November sale at $1.95 million.

“My father loved this game so much,” Bo Bromagen said. “He loved being at the racetrack. He loved running horses. He loved putting money through the windows and he loved taking it out of there, too. He was one of those guys who wanted to make the most of his experiences. He was a guy who came from nothing and made it to where he did. He never forgot that. He always wanted to share those experiences with as many people as he could.”

Bromagen is survived by his wife, Sandi; his children, Ashley (Evan Schmitt), Glenn “Bo” and Tyler (Caroline); his grandchildren, Cooper, Ella, and Owen Schmitt, and Reese Bromagen; and many cherished nieces and nephews. Graveside Services will be held Saturday, June 25 at 11:15 a.m. at Pisgah Cemetery in Versailles, KY. Visitation will be prior to the service starting at 10:00 a.m. at Pisgah Presbyterian Church. In lieu of flowers, donations can be made to the Glenn S. Bromagen Sharpsburg Memorial Fund at the Bluegrass Community Foundation, 499 E. High St, #112, Lexington, KY 40507.