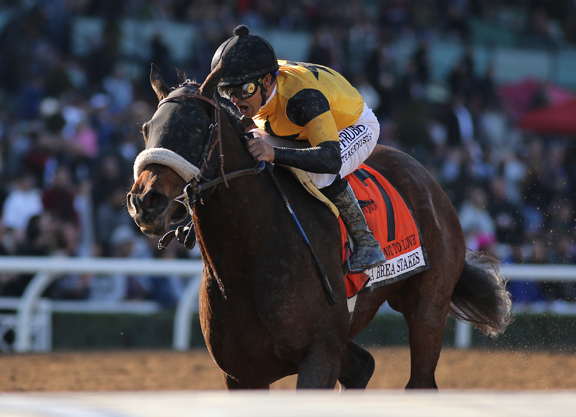 Hard Not to Love | Horsephotos

Hard Not to Love (Hard Spun), one blemish from being undefeated in her five-race career, will look to validate a scintillating upset of the GI La Brea S. and continue her rapid ascent as a likely short price this time around in Saturday's GII Santa Monica S. at Santa Anita.

Debuting with a local front-running score one day short of a year ago, the $400,000 Keeneland September buy repeated in an allowance Apr. 13 before suffering her only career defeat as a well-beaten third in the Angels Flight S. May 4. Heading to the bench for nearly six months after that, the Ontario-bred returned with an optional claiming tally going six furlongs here Oct. 25. Stepped up into top level company in the La Brea, the bay broke last and trailed the field for the first half-mile before rallying powerfully to overtake MGISW Bellafina (Quality Road) late for an 11-1 score. Trained by John Shirreffs, Hard Not to Love has drilled sharply four times over this track since that breakout performance, most recently going five furlongs in 1:00 3/5 (2/31) Feb. 7.

Her main competition appears to come from Mother Mother (Pioneerof the Nile). A 'TDN Rising Star', the dark bay has placed in three Grade Is, including a third in the La Brea, which earned her a career-best 96 Beyer. She backed that up with a short-odds success in the Kalookan Queen S. Jan. 12. Runner-up that day, Lady Ninja (Majesticperfection), re-opposes. The former $32,000 claim looks for her second graded stakes victory after capturing the GIII L.A. Woman S. Oct. 5.