Artorius Warms Up For July Cup With Racecourse Gallop 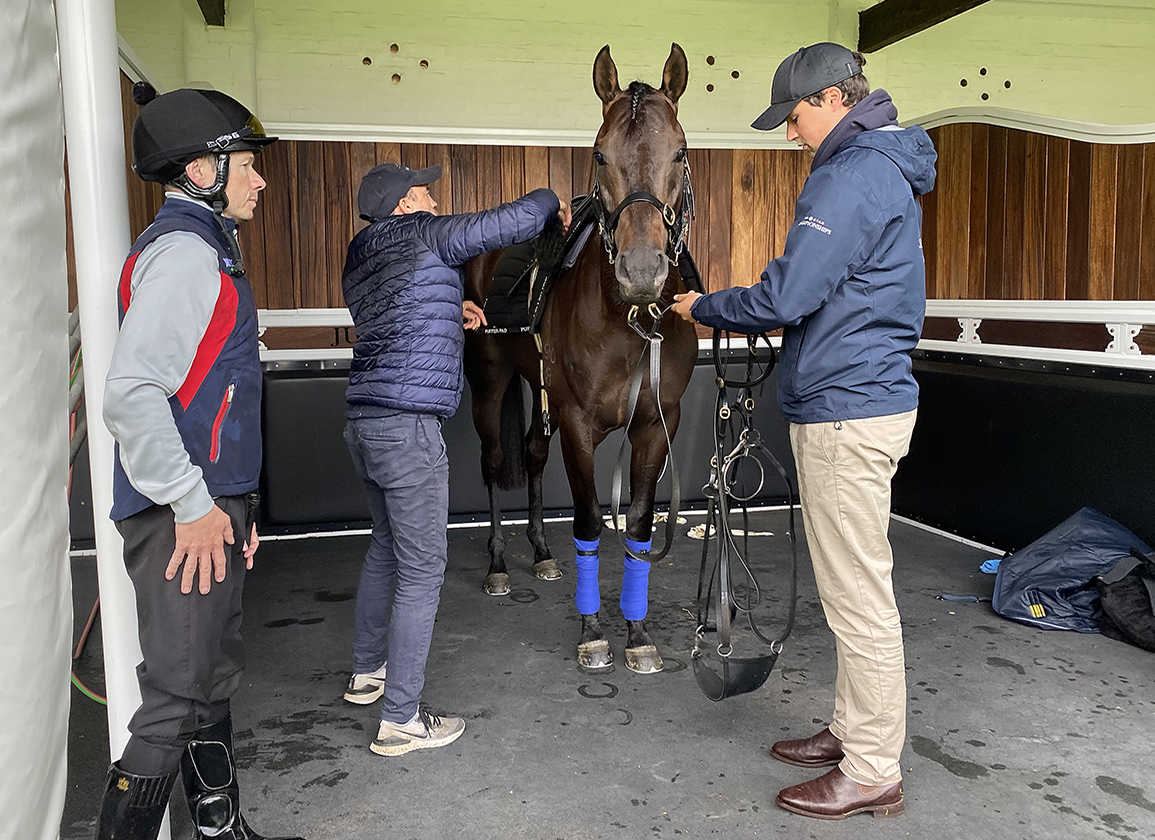 NEWMARKET, UK–Not since Agnes World (Danzig) in 2000 has the G1 Darley July Cup gone to a horse trained outside Europe. There has been a number of Australian challengers during that time, with Choisir (Aus) (Danehill Dancer {Ire}) going closest when finishing second to Oasis Dream (GB) (Green Desert) in 2003.

The next to sample the unique undulations of Newmarket's July Course will be the Anthony and Sam Freedman-trained Artorius (Aus) (Flying Artie {Aus}), who was given a preview of the track when working four furlongs (800m) with big-race partner Jamie Spencer on Friday morning. The 3-year-old, who ran a fast-finishing third at Ascot in the G1 Platinum Jubilee S., worked alongside the five-time-winning sprinter Ancient Times (GB) (Exceed And Excel {Aus}), trained by Harry Eustace, a former employee of Lee Freedman and brother of Australian-based trainer David Eustace.

Artorius's co-trainer Sam Freedman was on hand to oversee the exercise and was happy with the morning's work.

He said, “They just worked over four furlongs and basically quickened up the last two furlongs and he was just hitting top gear on the line. He's very fit and he's pulled up very well. He seemed to handle the track well enough. I walked it yesterday and we don't have this sort of track in Australia.”

Of the stiff six furlongs of the July Cup, Freedman added, “It should suit him. I hope that when they come down the hill from the three to the two that he's in touch with them. He's going to be finishing very hard but he's just obviously got to be a little bit closer. It's been the story of his career that he's often left himself a little bit much to do.”

Freedman, who trains in partnership with his father, is familiar with Newmarket, having spent two years working for trainer Roger Varian. During his stay here, Artorius is based at Bedford House Stables, owned by Charlie Fellowes, and Freedman said that the G1 Blue Diamond S. winner has settled well in his new surroundings.

“His coat has improved and he loves it here,” he noted. “There's probably no better place to train a horse in the world than here. They are looking to set up something similar to this in Australia in Victoria. This horse has never been happier, I don't think, than since he's been here. We've got the right horse for the job, he absolutely loves it.”

Further travels could be on the cards for Artorius, who is pencilled in to contest the G1 Prix Maurice de Gheest in Deauville on Aug. 7 if he comes out of the July Cup well.

Reflecting on his first overseas performance at Royal Ascot, Freedman said, “At the 600 [metres] I was worried he was going to tail off but I think the big field worked against him and also for him because the speed was good. He actually enjoys being in among the action–the bumping around seems to be really urge him on. Jamie knows him really well now having had a few gallops and a race ride.”

“He's not here for the prize-money, though the prize-money is really good on Saturday,” Freedman added of the July Cup, which has a record purse of £600,000.

“I think if the Australian sprinters were after prize-money they'd probably stay at home but we are looking to build on his stallion CV. He is getting better and better, so if he could win a Group 1 in both hemispheres that would certainly look good on his CV.”