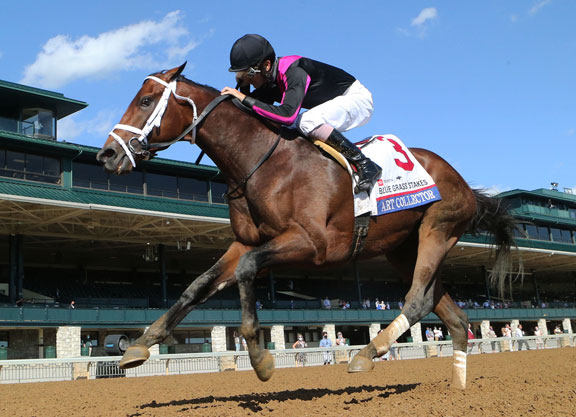 Bruce Lunsford homebred Art Collector (Bernardini) put his name in the hat for the Sept. 5 GI Kentucky Derby with a victory in the GII Toyota Blue Grass S. at Keeneland Saturday. Engaged in a three-way duel for control through the opening stages, the 2-1 shot ended up a close third just off MGSW filly Swiss Skydiver (Daredevil) and Shivaree (Awesome of Course) as the first quarter went in :23.25. Maintaining that position while running off the fence through a :46.61 half-mile, the dark bay ranged up menacingly outside of Swiss Skydiver with 10 charging up behind as Shivaree called it quits with three-eighths left to run. Swiss Skydiver turner for home in front, but Art Collector was right with her and those two drew away from the rest of the field down the lane. Art Collector shrugged free of the filly in the final sixteenth and rolled clear to a 3 1/2-length victory. Swiss Skydiver held second over Rushie (Liam’s Map).

“It’s been a little bit of a roller coaster ride,” said trainer Tom Drury. “Everybody was fighting the same thing with COVID-19 and the uncertainty. I’m at a loss for words. It takes a village to get these things; there’s a lot of people who have done their part. I’m just honored to be able to share this with my staff and everyone that worked to get him here.”

As for the Derby, Drury said, “It took me my whole life just to get to this one win. I’m going to enjoy this one and we’ll worry about that tomorrow.”

Graduating at second asking on turf at Kentucky Downs last September, Art Collector was seventh in the GIII Bourbon S. on grass at Keeneland last October and was sixth in his first try on dirt in November at Churchill Downs. He romped by 7 1/2 lengths in a six-panel event in the slop on the Churchill main track Nov. 30, but was disqualified from purse money after a positive test for previous trainer Joe Sharp. Transferred to Tom Drury after that, Art Collector won a seven-furlong test at Churchill Downs May 17 and won by 6 1/2 lengths when stretched to 1 1/16 miles in Louisville June 13.

Art Collector is the 46th graded stakes winner for 2006 champion 3-year-old colt Bernardini, a reliable conduit of A.P. Indy. He is also the third of Bernardini’s 75 black-type winners specifically out of a Distorted Humor mare, including 2017 GI Vosburgh S. winner Takaful. Additionally, Art Collector was the second graded winner of the day at Keeneland out of a daughter of Distorted Humor, following Guarana’s win in the Madison. Bruce Lunsford bred Art Collector and his dam Distorted Legacy, a half to Lunsford-bred GSW and 1999 GI Belmont S. and GI Travers S. runner-up Vision and Verse (Storm Cat), but they are originally from a multi-generation Greentree Stud family. Distorted Legacy’s granddam is a half-sister to the Greentree stars and later sires Hatchet Man (The Axe II) and Stop the Music (Hail to Reason). Lunsford has gotten colts the last two years out of Distorted Legacy, both by Into Mischief.