Arrogate Takes On The World 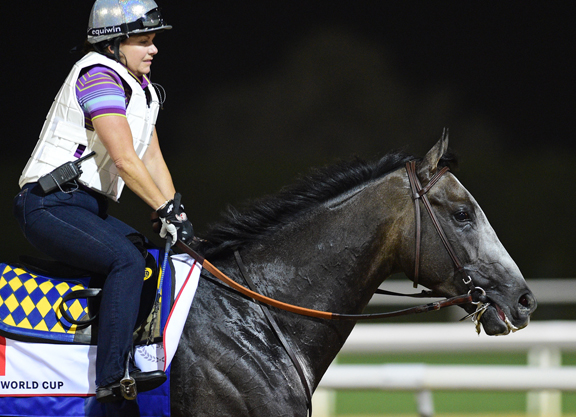 What Juddmonte Farms's Arrogate (Unbridled's Song) has achieved in his seven-race career thus far has been nothing short of phenomenal, and the 4-year-old looks to have more records within his reach as he lines up as the heavy 1-3 international favourite for Saturday's $10-million G1 Dubai World Cup.

Arrogate announced himself as a likely superstar with a 13 1/2-length demolition of the GI Travers S. at Saratoga last summer, and the grey built on that promise when defeating last year's World Cup winner, California Chrome (Lucky Pulpit), in the $6-million GI Breeders' Cup Classic. Arrogate has made one start this season: a 4 3/4-length romp in the inaugural $12-million GI Pegasus World Cup at Gulfstream Park on Jan. 28, and a win on Saturday would see him surpass California Chrome as the richest-ever North American-trained Thoroughbred. It would also make him the second-richest horse in the world, behind only Japanese Triple Crown winner Orfevre (Jpn) (Stay Gold {Jpn}).

Arrogate's trainer, Bob Baffert, knows what it takes to win the 1 1/4-mile race, his two previous winners Captain Steve and Silver Charm placing him second only to Saeed bin Suroor for number of wins in the race.

Baffert has not won the race since Captain Steve in 2001, and he also saddles last-out G2 San Antonio S. winner Hoppertunity (Any Given Saturday), who was third in last year's World Cup and carries the same colours as Captain Steve.

“Both my horses are happy and healthy,” said Baffert. “It is very exciting to be here with two such good horses and it would be great if they could run first and second.”

Despite his previous experience in Dubai, Baffert admitted his nerves can still get the best of him.

“Until [Arrogate] gets in the gate and gets the job done in the race, I'm going to be a nervous wreck,” he said.

Arrogate and Hoppertunity head a strong Team USA, which also includes Grade I winner Gun Runner (Candy Ride {Arg}) and Pegasus third and fourth Neolithic (Candy Ride {Arg}) and Keen Ice (Curlin). Gun Runner, who won last year's GI Clark H. and started 2017 with a 5 3/4-length victory in the GIII Razorback H. at Oaklawn on Feb. 20, is also trained by a former World Cup winner in Steve Asmussen, who saddled Curlin to victory in 2008. Ron Winchell, principal of majority owner Winchell Thoroughbreds, was at Meydan on Thursday morning and he said, “He is doing absolutely fantastic and everyone is very happy with where we're at. He's bigger and stronger and more of a filled-out racehorse than he was last year. He hasn't been tested in his last couple of races, but we'll see here and we'll see about the 2000m. The distance is always a worry in the back of your mind when they haven't won yet at it, but there's nothing that tells us that as a stronger and better horse that he shouldn't be able to get it.”

The 14-horse World Cup lineup features a pair of horses that have tasted success on this card before, in the 2015 and 2016 G2 UAE Derby winners Mubtaahij (Ire) (Dubawi {Ire}) and Lani (Tapit). Mubtaahij split California Chrome and Hoppertunity in last year's World Cup before enduring a three-start campaign with trainer Kiaran McLaughlin in the U.S., which included a head second in the GI Woodward H. and a fourth behind Hoppertunity in the GI Jockey Club Gold Cup. Mubtaahij was an encouraging second first-up in a track-and-trip handicap on Feb. 23, but the draw was not kind to the 5-year-old.

“We were pleased with his one run this year and he has come on a lot for that outing,” said trainer Mike de Kock. “We were pretty happy until the draw; 14 is not good but it is what we have and we will need to deal with it.”