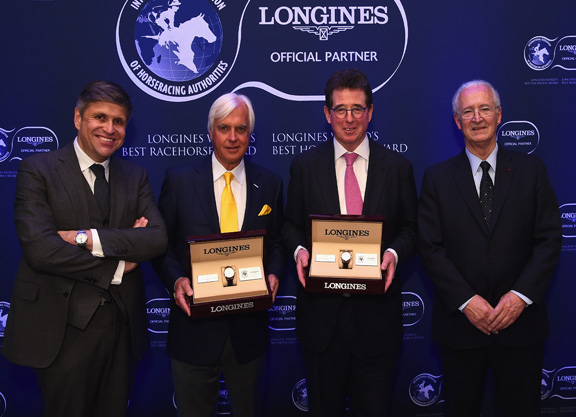 LONDON, UK – Less than five months after Arrogate (Unbridled’s Song) had posted the top-rated performance of 2016 when winning the GI Breeders’ Cup Classic, the Juddmonte colt’s last-to-first effort in the G1 Dubai World Cup earned him the accolade of Longines World’s Best Racehorse for the second time.

Following American Pharoah’s title in 2015, the award has gone to a horse trained in America by Bob Baffert for this third consecutive year. The winners were announced on Tuesday during an awards ceremony at Claridge’s in London, with Baffert in attendance alongside his wife Jill and son Bode.

Arrogate, who was awarded a mark of 134 for his exploits at Meydan, becomes the second Juddmonte representative to have been a dual winner of this prize following the homebred Frankel (GB) (Galileo {Ire}), who was the Longines World’s Best Racehorse in 2011 and 2012, his first mark of 136 equalling that awarded to Sea The Stars (Ire) (Cape Cross {Ire}) in 2009, while his final rating of 140 remains the highest ever.

Paying tribute to Arrogate, Baffert said, “He gave so much that night [at Meydan] spotting horses like Gun Runner eight to ten lengths. He never could come back to that form. It was one of those races–I don’t think I will ever witness a race like that again and that is why they are honouring him today.

Arrogate was beaten in his final three starts, all at Del Mar, including when attempting to defend his crown in the GI Breeders’ Cup Classic.

“He was never the same after [the Dubai World Cup],” Baffert added. “He was healthy and all but he just said that’s it.”

Winx Is Top Mare And Turf Horse
Australian superstar Winx (Aus) (Street Cry {Ire}) again had to play second fiddle to Arrogate in the overall rankings but was named the top-rated mare and turf horse in the world when earning a rating of 132 for her victory in the G1 George Ryder S. in March. The Chris Waller-trained 6-year-old has subsequently won another six races, remaining unbeaten in 22 consecutive races since May 2015, including three G1 Cox Plates.

Asked whether Winx might make an appearance at Royal Ascot this summer, Kepitis’s fellow owner Peter Tighe replied, “We can’t give you a definitive answer now. We’ll get back to Australia and put her through a few trials but we don’t want to give anyone false hopes, either here or in Australia. Once she’s through her trials we’ll give it careful consideration.”

Case Clay, representing Three Chimneys Farm, where Gun Runner is set to stand after his Saturday swansong and which owns him in partnership with Winchell Thoroughbreds, said, “Gun Runner has done really well in training and we’re very happy to be here. He carries his speed well and is a good-looking horse who is well bred so we are hoping that he will pass on these attributes to his offspring.”

He continued, “Steve Asmussen and his team have done an incredible job managing the horse since he started racing and he is a dream come true for the whole of team Gun Runner–I’m just here on behalf of Three Chimneys and the Winchells but I know that we’ve all been pinching ourselves all year. He was very impressive as a 2-year-old and a Grade I winner at three and then he did what he did at four.

“We’ll see what he can do on Saturday, it won’t be easy. Every Grade I is hard to win. He’s been well received by breeders and he has about 150 mares on the book right now.”

The top-rated 3-year-old in the world, Cracksman earned his 130 rating in the G1 QIPCO Champion S. at Ascot. John Gosden can take pride in having trained the two best horses in Europe in 2017, though many may feel that Cracksman’s stablemate Enable (GB) (Nathaniel {Ire}), the winner of five consecutive Group 1 races, culminating with her best-rated performance in the G1 Qatar Prix de l’Arc de Triomphe, should have been higher up the list, especially given the fact that the Arc, which she won by four lengths, was named as the Longines World’s Best Horse Race for the second time.

Gosden, however, was quick to praise the efforts of Arrogate and said, “Enable won the best race but to paraphrase Mark Twain, horse races are purely a matter of opinion.

“What Arrogate did in the Dubai World Cup was beyond wonder. I think it was the most frightening, extraordinary race of the year. I stood there and I couldn’t believe what he did. That to me is enough in itself. I’m thrilled to be here today, with Cracksman, and Enable winning the best race, so it feels like we’ve had a couple of winners and I’m pretty happy.”

Regarding seasonal plans for his two stable stars, Gosden added, “Cracksman will start when he tells me he’s ready, though the way he behaved this morning I might run him next week at Newcastle. He’s full of himself–he had three bucks and a rear before he cantered today.

“But one is doing a canter, one is trotting. If they are happy and healthy and well, they will both go to Longchamp and if they meet along the way, they meet along the way. All options are open. I think Mr Oppenheimer and I are very clear that we’d like Cracksman to run in the King George–this is a race that his family sponsored for years–and we want to run in the Arc. Everything before that or during is not as important as those two races, so that’s where we’re aiming.”

He continued, “With Enable, obviously the Arc is the key race but we’re looking at the Juddmonte International beforehand. What happens before that, the horses will tell us.”

For her Arc victory, Enable was awarded a rating of 128, while the Sir Michael Stoute-trained Ulysses (Ire) (Galileo {Ire}) was next with a mark of 126 for his G1 Juddmonte International win in the colurs of the Niarchos family

Godolphin Duo Honoured
Godolphin’s Cloth of Stars (Ire) (Sea The Stars {Ire}) was the top-rated French-trained horse on 125, earned for his runner-up finish in the Arc when splitting Enable and Ulysses. Andre Fabre’s colt was joint-seventh overall with the highest-rated sprinter on the list, Harry Angel (Ire) (Dark Angel {Ire}), who also carries the royal blue of Godophin and is trained by Clive Cox. His four-length G1 Haydock Sprint Cup victory over Tasleet (GB) was judged to be his best performance of 2017.

Representing Britain, America and Japan respectively, Ribchester (Ire) (Iffraaj {GB}), Collected (City Zip) and Kitasan Black (Jpn) (Black Tide {Jpn}) finished in equal ninth position on a rating of 124. Japan’s top horse Kitasan Black bowed out with victory in the G1 Arima Kinen on Christmas Eve before retiring to Shadai Stallion Station, while Ribchester was a third horse in the top ten for Godolphin, earning his best rating for his G1 Prix du Moulin win. Breeders’ Cup Classic runner-up Collected was another feather in the cap of Bob Baffert in 2017.

Just below the top ten, eight horses earned the same mark to finish collectively in twelfth position on 123 and these included three from Aidan O’Brien’s stable all by Galileo–Churchill (Ire), Highland Reel (Ire) and Order Of St George (Ire).

Arc Is World’s Best Race Again
For the second time, the G1 Qatar Prix de l’Arc de Triomphe was awarded the title of Longines World’s Best Horse Race of 2017. The award was inaugurated in 2015, with France’s most famous race being named the winner in the first year, while last year the award was claimed by the GI Breeders’ Cup Classic.

Collecting the award on behalf of France Galop, President Edouard de Rothschild said, “It is a pleasure to receive this for the second time. The Arc will return to Longchamp this year after the redevelopment and we will be honoured to display this commemorative plaque on our new stand.”