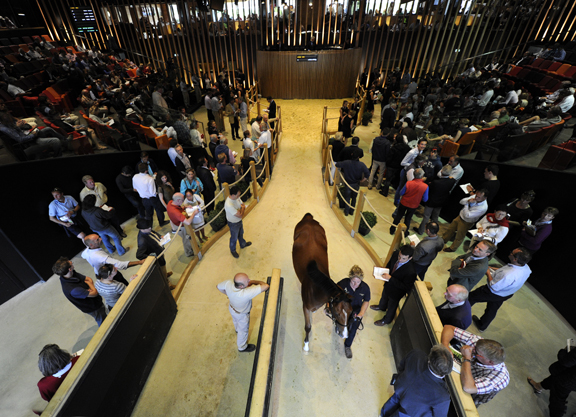 Action returns to the ring in Deauville today | Zuzanna Lupa

Just shy of 500 horses have been catalogued as Arqana’s season starts today with its two-day February Sale in Deauville.

The 3-year-old Learning To Fly (Ire) (Oasis Dream {GB}) led last year’s mixed auction when sold for €300,000 by Teo Ah Khing and Mayfair Speculators but this time around it may well be breeding prospects who steal the limelight. The sale features the conclusion of a dispersal of the stock of Issam Fares, which began last December, as well as the dispersal from the estate of the late Marquise de Moratalla, owner-breeder of French Classic winner Tin Horse (Ire) (Sakhee).

The latter is being handled by Alban Chevalier du Fau’s Channel Consignment, which will send 12 fillies and mares through the ring, including Graciously (GB) (Shamardal), a half-sister to G1 Falmouth S. winner Giofra (Fr) (Dansili {GB}) who is being sold as lot 119 in foal to Invincible Spirit (Ire). Also among the draft is Red Whisper (Fr) (Redoute’s Choice {Aus}), a dual winner at three from the family of Tin Horse (lot 29), and the G3 Prix Chloe winner Wilside (Ire) (Verglas {Ire}), now 13 and the dam of stakes winner Sarigan (Fr) (Teofilo {Ire}). She is being sold with a late May cover to Wootton Bassett (GB) as lot 122.

Among five mares to be offered in foal to Le Havre (Ire) is the Group 3-placed Mark Of An Angel (Ire) (Mark Of Esteem {Ire}), the dam of GIII Santa Barbara S. and G3 Park Express S. winner Queen Blossom (Jeremy). From the Fairway Consignment draft, she will sell tomorrow as lot 368.

A late call-up to the sale is the 3-year-old Forestiere (Fr) (Rajsaman {Fr}), a half-sister to La Sardane (Fr) (Kingsalsa), whose race record stretches to wins at group and graded level in France and America. She is slated as a wild card in the draft of the Garcon family’s Haras de la Hotellerie as lot 125.

The Channel Consignment will sell the only other wild card (lot 65), the 3-year-old filly Karma Seeker (Ire), by Oasis Dream (GB) out of a listed-winning half-sister to the Champion Hurdler Katchit (GB) (Kalanisi {Ire}). Trained by Henri-Francois Devin, Karma Seeker won at Pornichet over 1700 metres on Jan. 23.