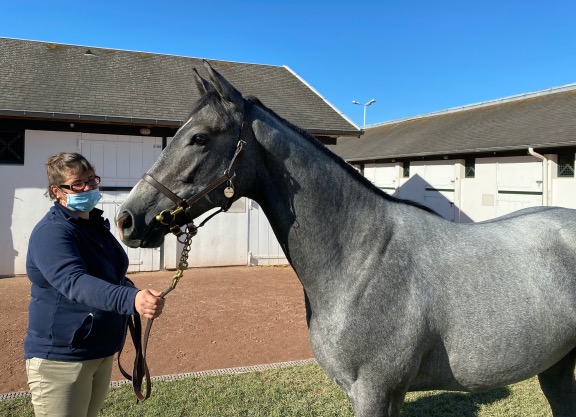 The Dark Angel colt will race for Antoine Griezmann | Arqana

DEAUVILLE, France—A numerically enhanced Arqana October Sale drew to a close in Deauville on Friday with encouraging figures in a year which cannot shake off the spectre of Covid-19. As 9pm curfews are about to be reinstated across the regions of France where the virus is spreading most quickly, the curtain has come down just in time on the major yearling sales of the season. What the situation will be come the breeding stock sales is anyone's guess but, for now, Arqana has managed to stage its October Sale in its usual slot, with the number of yearlings and sessions increased to accommodate those horses which would originally have been earmarked for the Osarus September Sale in La Teste de Buch, which wasn't able to be staged in situ this year.

The October Sale in Deauville has been conducted over four days in the recent past and, as a guide only rather than for a direct comparison, 414 yearlings were sold in last year's edition for a total of €17,465,500 at an average of €40,959.

The top lot of the final session of the Arqana October Sale will be joining trainer Philippe Decouz who, with agent Laurent Benoit of Broadhurst agency, bought the Dark Angel (Ire) colt for €70,000 on behalf of footballer Antoine Griezmann, who already has 11 horses in training with Decouz.

Lot 685 was the final lot through the ring for Lady O'Reilly's Haras de la Louivere, and is out of the winning Lawman (Fr) mare Larose (GB), a half-sister to the listed Prix Finlande winner Monroe Bay (GB) (Makfi {GB}).

Commenting on the week's business in Deauville, Arqana's President Eric Hoyeau and Executive Director Freddy Powell said in a joint statement, “We are immensely grateful towards our vendors, who have maintained their faith in Arqana and showed tremendous resilience throughout the season. It has been a long week and we are very much aware of the uneasy financial situation breeders and pinhookers are faced with due to the high production costs, but their adaptability has allowed the market to play its role and all these yearlings can now move on to the next stage of their career. We also wish to thank all buyers and underbidders, on the grounds on online, for their relentless competitiveness. It is specifically heartening to see a new generation of trainers step forward–there is no doubt that the measures recently announced by France Galop to bolster 2-year-old racing in France will have encouraged them even further. Finally, our heartfelt gratitude goes to all members of the Arqana team, who have been on deck every day with a positive attitude, as well as to our partners headed by caterer Henri Morel and his staff, who keep doing their best to serve our clients in spite of the logistical constraints.”