Arnold Puts Tennessee Back on the Map at Fasig October Sale 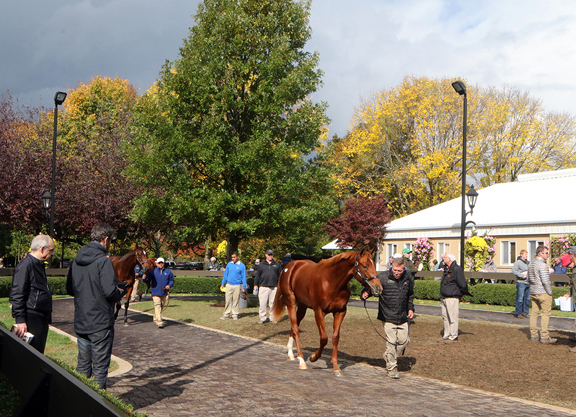 Despite a rich history of Thoroughbreds breeding in Tennessee, without a racing program, the state only reported 22 mares bred in 2019. Three of those resulting foals are catalogued for next week's Fasig-Tipton Kentucky October Yearlings Sale. The trio were bred by Van and Karla Arnold out of their fledgling Thoroughbred broodmare band at the family's Cold Springs Farm in Mountain City as foal shares with Taylor Made stallions Mshawish and Midnight Storm.

Van Arnold's parents purchased Cold Springs Farm, which sits in the northeast corner of Tennessee, in 1970 and the farm is primarily used to raise cattle. The Arnolds, who have a broodmare band of some 45 Quarter Horses, decided to start a Thoroughbred band just five years ago.

“Right now we have around 10 Thoroughbreds in the broodmare band,” Arnold said. “We are fairly new at it. Our goal is to produce some that we can race, but right now, we are producing them to sell.”

The Arnolds' initial investment in Thoroughbred mares started out as a purely practical endeavor for the farm.

“We have a cow-calf operation, we have about 400 mama cows and it's a commercial operation,” Arnold explained. “We use the horses to help us with the cattle and the Thoroughbreds are as handy as the Quarter Horses. Quarter Horses have a lot of Thoroughbreds back in there, [AQHA Hall of Famers] Doc Bar was by Lightning Bar, who was by the Thoroughbred Three Bars. The reason we wanted to cross them was to make ranch horses that could cover ground quicker and be a more versatile horse, rather than having a certain discipline of cutting or whatever and just have ranch type horses that would be able to do all the jobs that we need to do with them. And it adds speed and stamina to them to get the Thoroughbred to them.”

The original intention of crossing the two breeds soon morphed into a desire to be involved in breeding racehorses.

“It was probably just growing up and watching the races and seeing what kind of animals they were–they are just majestic and beautiful,” Arnold said of the transition. “It was just intriguing and we thought we wanted to try it.”

Arnold continued, “My wife Karla and I are just passionate about horses. We just like raising foals and we had the help of Taylor Made–their motto is 'With us, you're family' and it's true. They really helped us and encouraged us and helped us get to the next step.”

The Arnolds teamed up with Taylor Made to breed their three Fasig-Tipton October offerings. Hip 573 is a daughter of Mshawish out of Sweet Maxine (Value Plus), while hip 1448 is a colt by Midnight Storm out of J Be K's Sonnet (J Be K), and hip 1531 is a filly by Mshawish out of Lemon Drop Pop (Lemon Drop Kid).

“All of our mares have won money,” Arnold said. “We are pretty proud to have these bloodlines here. We have a daughter of Value Plus and a Lemon Drop Kid and J Be K daughter and we also have an Uncle Mo daughter that we are going to try to breed next spring. It's just a dream, I guess, to have these pedigrees here.”

Of the Kentucky-based sires his mares have been bred to, Arnold said, “Taylor Made have helped us cross these mares with their stallions. It's just amazing that an animal like that could be born here on the farm. I watched Midnight Storm when he was running. And Taylor Made got him and stood him and I was like, 'Wow.'”

The farm is also home to a daughter of the sire of GI Kentucky Derby winner Medina Spirit.

“When we first started, we got a daughter of Protonico. We still have her on the farm. And when Medina Spirit won the Derby–it was just amazing–to have a filly related to the Kentucky Derby winner. It's just so rewarding. And we are so proud.”

Cold Springs Farm was represented by its first starter as a breeder when Sweet Tootsie Lu (Tale of Ekati), purchased for $4,500 at last year's October sale, opened her career at Indiana Grand in August. Out of Sweet Maxine, the 2-year-old came up just a head short of breaking her maiden at Mountaineer Oct. 18.

“She is making me proud,” Arnold said.

“Being from Tennessee, it's a little more difficult because we don't have incentives,” Arnold agreed. “But the Belle Meade Plantation was one of the greatest Thoroughbred farms in the world in it's time and that  was in Tennessee. So, it gives us hope and something to strive for, with the help of Taylor Made. They have helped me tremendously and I am thankful for that.”

John Harding began breeding Thoroughbreds on his Belle Meade Plantation in Nashville in the early 1800s and by the later years of that century, the plantation was considered one of the leading Thoroughbred farms in the country. Eleven Triple Crown winners trace back to the Belle Meade stallion Bonnie Scotland and the farm was also home to English Derby winner Iroquois.

Looking ahead, Arnold added, “Maybe we are the pioneers of something to come to the state. To get racing here, the laws of gambling and stuff are probably hindering it. But maybe that could change with the times. It's does make [breeding in Tennessee] more difficult, but I think if we produce an animal who crosses the wire first, that's what counts.”

The Fasig-Tipton October sale begins next Monday and continues through Thursday with sessions commencing daily at 10 a.m.