Armstrongs In Line For Profitable Sale 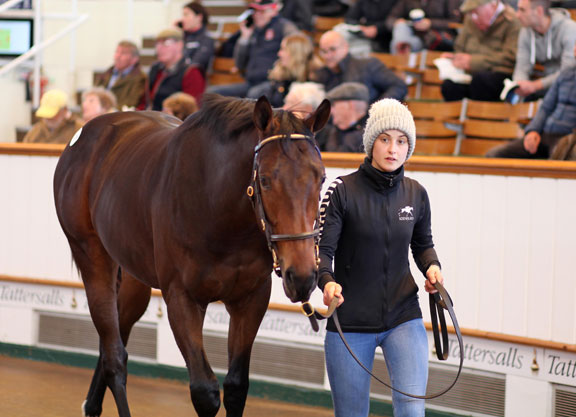 There is a general feeling of relief this year that the yearling sales are taking place at all. While some of the key indices are down on previous years there is comfort to be found in the strong clearance rates experienced at the sales thus far and even more comfort to be taken by some of the results pinhookers have had from their investments of 2019. For siblings Chris and Tara Armstrong this year could be one of the more memorable ones for their young pinhooking operation from Beechvale Stud.

At the upcoming Tattersalls Ireland September Yearling Sale they offer two yearling colts. The first is lot 107, a son of Profitable (Ire) whose first crop has been well received in the ring. The second is lot 222, who has arguably received one of the best pedigree updates since catalogue was printed. He is by Mehmas (Ire), who is currently leading first-season sire, and his half-sister is none other than recent G1 Matron S. winner Champers Elysees (Ire) (Elzaam {Aus}). This success for Champers Elysees was not the first update she had given her little brother, as prior to her Group 1 success she had also progressed from a listed win to Group 3 glory in the Fairy Bridge S.

Could anyone have foreseen this progression? Well maybe the Armstrongs could. “I remember last year seeing Champers Elysees in the parade ring at Naas before the Birdcatcher Handicap,” Chris recalls. “She was a big, rangy filly, and I thought whatever she does in 2019 would be a bonus, and, thankfully, she's gone on this year. I was actually at Galway the night she won the listed race. It was nice to see her win it. Then she went up 16 pounds to a mark of 110, which is a fair bit, even though she was impressive, but, thankfully, she was able to justify her mark and she won the Fairy Bridge well.”

Before the Matron, Armstrong says he was just hopeful she would run a credible race–“at least if she was even third or fourth that would be respectable”–but the filly duly came with a late run and provided the Armstrongs with not just a boost for their yearling but also a nice birthday present for Chris.

Cast back to the foal sales of 2019, and Chris recalls what he liked about the colt sibling that cost €19,000. “He caught the eye, he was well done by his breeder, Carl Brown,” Armstrong says. “He walked well and was a nice, big colt. We thought Mehmas had a very good chance of being leading first-season sire this year, too.”

The colt has taken his preparation well for his intended return to the sale ring.

“We've been very happy with him. He's developed a lot,” says Armstrong. “He is correct, walks well, has good muscle and we think he has a nice bit of quality about him; hopefully he'll shine in the sale over in Newmarket.”

As Armstrong points out, the Tattersalls Ireland September Yearling Sale now takes place at Park Paddocks in Newmarket, England, a point Armstrong says he believes may be of further advantage to this particular colt.

“I think it may actually benefit us more,” he says. “Mehmas is on fire. He had the winner in the Weatherbys Racing Bank 2yo Stakes race at Doncaster and if I'm right, I think 95% of his winners this year have been in England. He might be more appealing to the English market. Mehmas has got a lot of winners, he's got quality winners, and they seem to be adaptable over any ground and over five, six and seven furlongs.”

While it could be easy to get a little star struck by the above colt, the Armstrongs have another offering as part of their Beechvale Stud consignment and although the colt doesn't boast a Group 1 update he has merits that could also see a good return.

“We literally just saw him before he went into the ring last year and we actually didn't bid on him in the ring.” Armstrong recalls. “He wasn't sold so we got him vetted outside the ring afterwards and we bought him. He's a very well-proportioned colt, he stands well over the ground. He's done very well throughout the prep and Profitable seems popular at the moment. He's got a very good temperament too; we walk him around the roads at home on a Sunday for something different and he is absolutely bomb-proof. He eats, sleeps, works and he's thrived throughout the prep.”

Chris and Tara have only been pinhooking since 2015 and combine the task of raising weanlings to sales-ready yearlings with their full time positions for Aidan and Joseph O'Brien, respectively. When it comes to picking four-legged investments the brother and sister team are very much on the same page. “I suppose when you're only buying four or five each year, both myself and Tara have to be sure we are happy with what we are buying,” Armstrong says. “You've got to be happy with them because you look at them for the rest of the year.

The pair have already enjoyed a sale topper when their Night of Thunder (Ire) filly, bought for €15,000 as foal, led day two of the Tattersalls October Yearling Sale Book 3 last year when selling for 75,000gns, and a repeat of that experience may not be that far off.